Despite the claims to the contrary, innovation is a job creator, not a job demolisher. 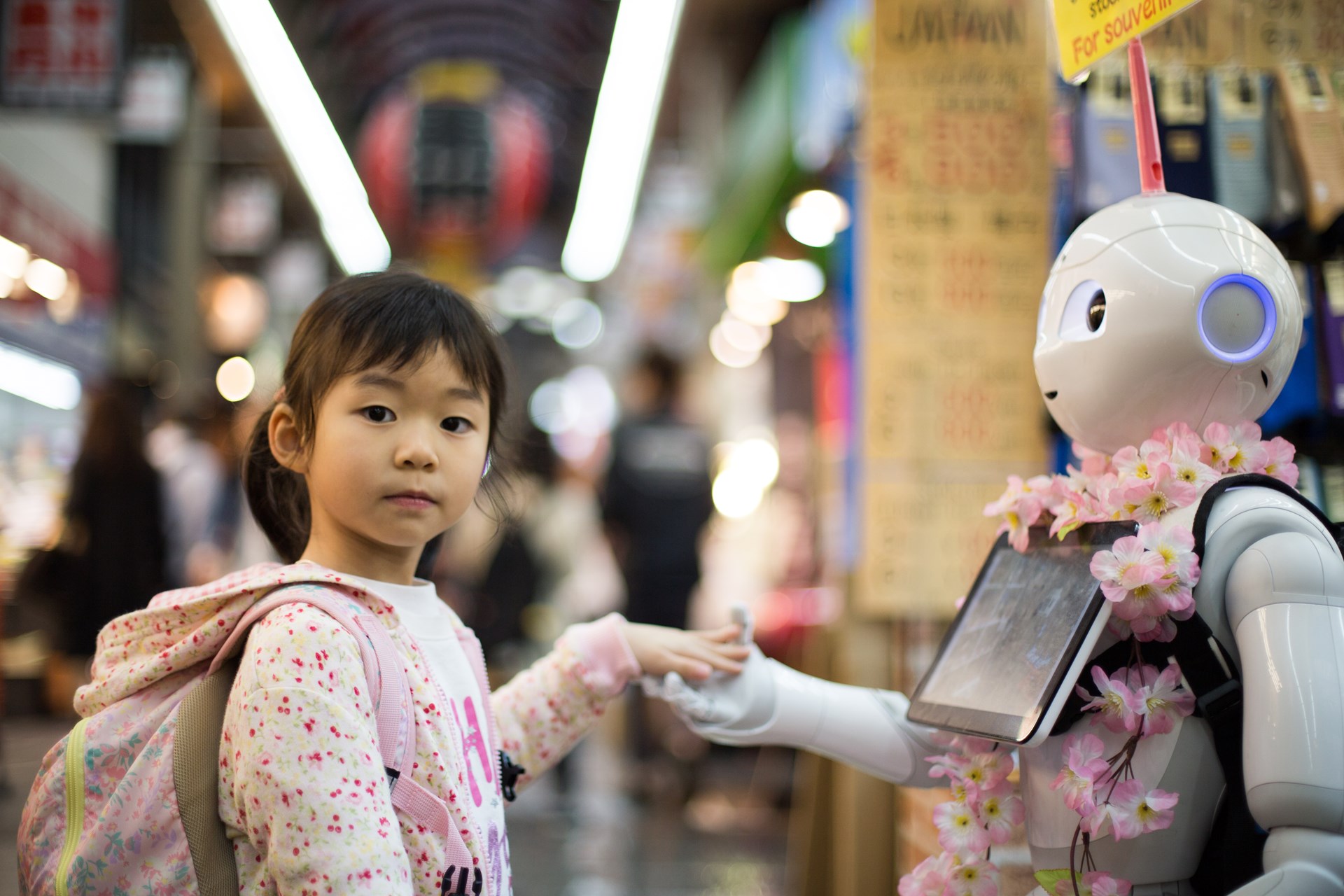 Photo by Andy Kelly on Unsplash

American presidential candidates Andrew Yang and Bill de Blasio are very concerned about robots taking people's jobs. Yang has been touting his $1,000 per month "Freedom Dividend" for every American adult since the beginning of his primary run to offset the potential job losses due to automation. De Blasio, on September 5th, published an op-ed published in tech magazine Wired proposing not only a "robot tax" but also the creation of a new federal agency to "oversee" automation and issue permits to businesses who want to increase their automation levels.

Machines will replace humans. Artificial intelligence will outpace people. There will be no jobs for the poor. Chaos! Famine! Technology is casting a shadow over the future. This is the current mainstream outcry—or could we say paranoia? Take a look at the recent news:

The headlines are disturbing and demonstrate that 2019 has definitely been the year to terrify people about technological development. But is there any validity to it? What does the future hold for us? Will there be mass unemployment?

We will be just fine. Both history and available data show that far from making working humans obsolete, technology has long been a “great job-creating machine.”

Where a Candle Is Blown Out a Lamp Is Turned On

Telephonists and telegraph operators had been happy-clappy for an entire century (1871 to 1971). During this period, their number rose by a factor of 40 in the UK. Then, as a study by economists at the consulting firm Deloitte noted, automated switchboards, the internet, and mobile telephony came up, and employment in the sector shrank dramatically. 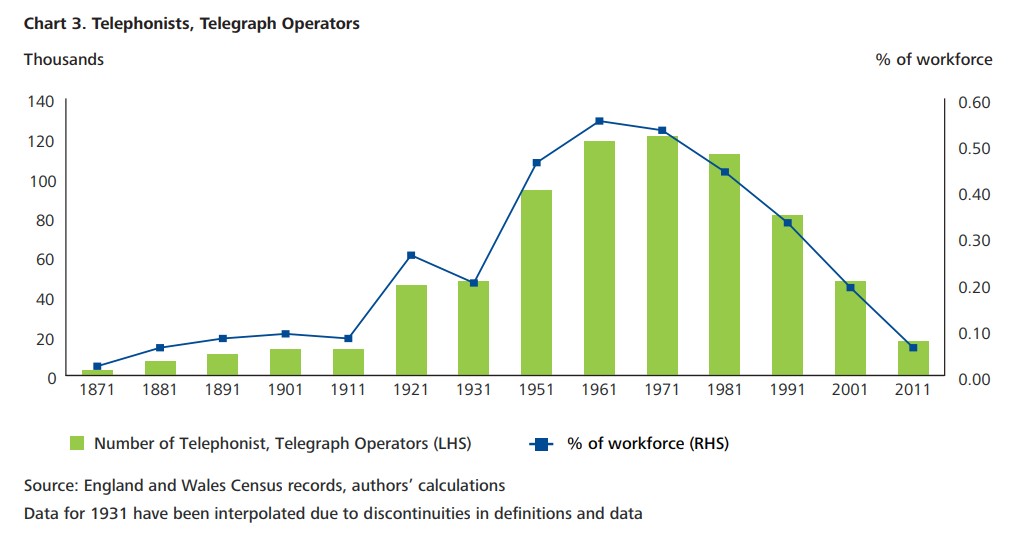 Several other professions have faced the same situation. This output derives from what we call creative destruction, where technological change is accompanied by a process through which the old is replaced with the new. New techs make existing tasks, skills, and occupations obsolete. So, should have we cried for telephonists and telegraph operators? Should have we tried something (perhaps state intervention) to save their jobs? Of course not!

Where a machine replaces a human, the outcome, in time, is economic growth and rising employment. A report estimated that nothing less than 85 percent of the jobs that will exist in 2030 haven’t even been invented yet. The future is on its way.How does it happen? Innovation boosts jobs in other sectors, especially (but not exclusively) in knowledge-intensive ones.

Lumberjacks, milkmen, movie projectionists, typesetters, and video store clerks did disappear due to technological advances. But do not panic. Technology also created a host of new positions that never before existed. Think about it: computing specialists, social media managers, digital marketers, energy engineers, software and app developers, drone operators, YouTube content creators… How many people are working today in areas that did not exist 50 years ago?

And this seems to be an unstoppable trend. A report by the Institute for the Future (IFTF) estimated that nothing less than 85 percent of the jobs that will exist in 2030 haven’t even been invented yet. The future is on its way.

Why Should We Play Against If We Can Play Together?

It is quite clearly (unquestionable) that machines have been taking on more repetitive and laborious tasks, and routine manual jobs suffer most because machinery can readily serve as a substitute for human labor. By contrast, innovations seem no closer to eliminating the need for a human (brain and hands) in cognitive non-routine tasks where technology is highly complementary and employment growth has been strong.

Technology can also represent a complementary force in the workplace.

So, innovation does not always mean the extinction of jobs that are eventually replaced by new ones. Technology can also represent a complementary force in the workplace.

It must be stressed: All jobs lost in outpaced fields due to technological development are recovered by a large margin in new areas. Are you still suspicious about that? Let me prove my point.

By the way, the direct job-creating role of technology is relatively clear and well-known. What is less obvious is the way it affects knowledge-based and -using sectors (such as medicine, education, business, communication, and professional services), increasing employment over time. It is no wonder that since 1880, the top fastest-growing occupations around the world have been in the services sector. Check it in the chart below (data from the Bureau of Economic Analysis-US Department of Commerce). 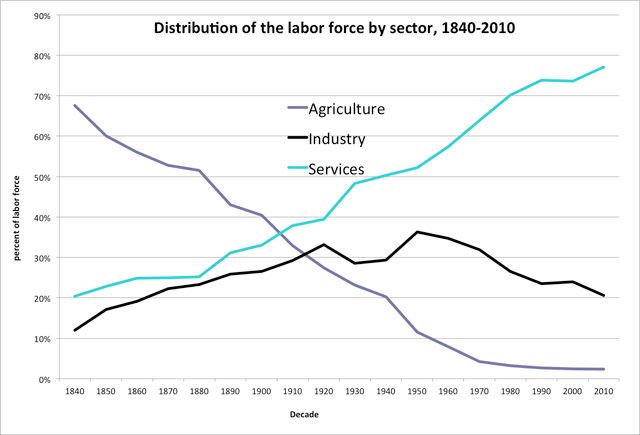 And that is not a phenomenon unique to developed countries. Even emerging countries can enjoy the fruits of this process—as long as they invest in technology.

Brazil is a good example of that: Since the middle of the 1980s, the country has put into play a series of measures to accelerate the pace of technological progress. What was the result? In two decades (1995-2014), the number of Brazilians employed (formally registered) increased from 23.8 to 49.6 million.

However, other peoples do not have the same “luck.” According to the National Bureau of Statistics, only 10.8 percent of Nigeria’s total working population is registered, and about 50 percent of the current workforce is engaged in subsistence agriculture and informal trading. It is not a coincidence that Nigeria is an economic backwater and ranked 141th in GDP (nominal) per capita ($2,049).

What lesson must we learn from it? Sustained economic growth relies on innovation.

Considering the negative publicity we are exposed every day, it is hardly surprising that the 2019 Edelman Trust Barometer Report has revealed that 47 percent of people around the world think technological innovations are happening too quickly and leading to changes that are not good for “people like me.” Fifty-nine percent believe they do not have the training and skills necessary to get a well-paying job in that environment, and 55 percent think automation and other innovations are taking jobs away.

Innovation does not necessarily destroy occupations, but it does change the way we work.

It is a pessimistic and distrustful picture. Nonetheless, as we have just seen, people are misinformed.

All the abundant evidence we pointed out attests to the overall job-creating power of technology. Innovation does not necessarily destroy occupations, but it does change the way we work. While some human professions are lost to machines, many other careers are created or boosted in the areas affected by technological development.

The Math Works Clearly in Favor of Technology

Now for the good news (the last impression matters and remains, I hope). Humans have much more to win than to lose with technological development.

The most recent estimation by the World Economic Forum’s “The Future of Jobs Report” affirms that 75 million jobs may be lost as companies shift to more automation.

It also notes that 133 million new jobs may emerge by 2022 since tech developments will arrive in tandem with broader trends, such as the expansion of the middle class in developing countries and new energy policies. Ergo, innovations will create 58 million more jobs than they displace. What an upside!

So, technology is likely to take the most repetitive jobs, but do not worry. It is no closer to eliminating human labor than it was 150 years ago. Humans have much more to win than to lose with technological development.