Social Democracy in Brazil Is Robin Hood in Reverse

How social democracy works in Brazil: it takes from the poor and gives to the rich.

Social democracy is said to be a harmoniously mixed economy with market and state intervention, but the Brazilian experience has shown it can mean a cozy alliance (between powerful businessmen and statesmen) fashioned to make the rich richer.

Brazilians were told the way to reduce poverty and curb social inequality was to enlarge the government’s role in the economy through the expansion of public services and works. And they bought it! Social democracy carried hope for a better future.

The social-democratic government had made room for a Leviathan that acted as a Robin Hood upside down, taking from the poor and giving to the rich.

Then a bomb blew up.

In 2015, the biggest corruption scandal in Brazilian history was uncovered (turning into a major nationwide anti-corruption operation codenamed Car Wash) that revealed a shocking scheme of illegal payments involving important politicians and big corporate executives who had bitten off billions in over-invoiced public contracts and bribes.

As it turned out, far from delivering the promised social-economic progress, the social-democratic government had made room for a Leviathan that acted as a Robin Hood upside down, taking from the poor and giving to the rich.

How the Scheme (the Drain) Worked

Proponents of social democracy claim that governments must be responsible for providing public utility services (health care, education, gas, water, sewage, telephone services, transportation, etc.). This model raises a question about public procurement: Who will the government hire to do what the state is meant to do (delivering goods; building roads, bridges, houses; providing services)? Brazilian law asserts that it needs to be done through public tender. Then, in theory, bidders will compete, and the best (cheapest) price will win.

To get away from competition, swell their profits, and guarantee public contracts, big firms formed a kind of “club”—a brotherhood that replaced real competition with apparent (fake) competition. Bids were previously agreed upon in secret meetings where the entrepreneurs decided who would get the contract (believe it or not, through a kind of bingo) and what would be the (over-invoiced) price.

So, contractors were ensuring business on excessively lucrative terms. They were ripping the government off, weren't they? Yes, but they were not alone. It would be impossible to do that completely in the shadows (the prices were clearly exorbitant). To make the scheme feasible, entrepreneurs agreed to channel a share of between one percent and five percent of every deal into secret slush funds—money that was then distributed to politicians in power.

The mechanism of Social Democracy in Brazil

See? That is what we call wealth redistribution!

For more than a decade, the scheme fleeced taxpayers and redirected the money to powerful businessmen and politicians. The values under investigation total no less than an impressive $4.2 trillion.

An Eternally Developing Country (and Its Inequities)

In a report co-directed by Thomas Piketty, the World Wealth and Income Database pointed out an interesting fact: in 2001, the Brazilian ultra-rich (0.1 percent of the population) captured 11 percent of the national GDP, a percentage that rose to 14.4 by 2015.

Who is surprised? Since the seven largest Brazilian construction firms were involved in the intricate web of political and corporate racketeering exposed in 2015, it is predictable that these executives grew richer.

Some might consider it a consolation prize that in the same period (2001-2015), the number of Brazilians living in absolute poverty (income below the international poverty line of $1.90 per day) fell from 27.31 percent to 10 percent. Does this mean social democracy is efficient at reducing social inequality? Not at all.

The extremely rich manipulate the system in their favor, making the demand for public services their gold mine.

If fact, for most of the population (the relatively poor and middle class), things do not get on so well under Brazil’s social-democratic government: Crises constantly hit the country hard (2001; 2003; 2008-09; 2014-2016), leading to unemployment. Brazilians’ buying power has been diminishing year after year ($100 billion just between 2014 and 2015), plunging the market into successive recessions. According to the IMF, Brazil is ranked 80th in GDP (nominal) per capita ($16,154).

Fascinating, isn’t it? Proclaiming itself as defenders of the needy, the social-democratic government does offer some support to the extremely poor—the ones who, after all, do not have wealth to be taken out—and they are needed (excuse the pun): It is in their name that plunder through taxation is justified. However, those who most benefit through this interventionism are the extremely rich! They manipulate the system in their favor, making the demand for public services their gold mine.

And how about most people? They see their wealth being extracted through taxes and need to get by (on their own) in an eternal developing country.

Some Kind of (Peculiar) Robin Hood

So, after decades of state intervention, Brazil remains a low-income country. But this fact does not reduce the social-democratic tax voracity. A study conducted by the Brazilian Institute of Planning Taxation concluded that in 1995, Brazilians had to work 106 days (three months and 16 days a year) to pay their taxes. In 2015, it went up to 151 days (5 months)—an increase of 42.45 percent in 10 years.

Statesmen argue that high taxes are necessary to afford cash transfers aimed at reducing social inequality. Well, today Brazil has the same Gini coefficient, which measures the concentration of income, as it did in 1960: 0.53, yet the tax burden was 17 percent and is now 35 percent of GDP. Social democracy is a group of self-serving individuals who try to maximize their own interests by extracting money without regard for social good.This means that today, although government drains more than twice the resources, Brazil has the same degree of inequality. How can that be? It’s simple.

Less than one-third of these transfers (“tax-welfare churn”) actually reach the relatively poor. In fact, low-income people pay proportionally more taxes due to a regressive system based on indirect taxes (that make up 53 percent of tax revenues) levied on consumption spending on goods and services—the smaller the overall income of a household, the bigger the share they spend on consumption and, consequently, the more taxes they pay relative to their resources. A report by Oxfam has shown that Brazilians in the bottom income bracket spend 32 percent of their income on taxes, while people in the top spend only 21 percent.

Distribution of the tax burden between the poor and the rich relative to their income. 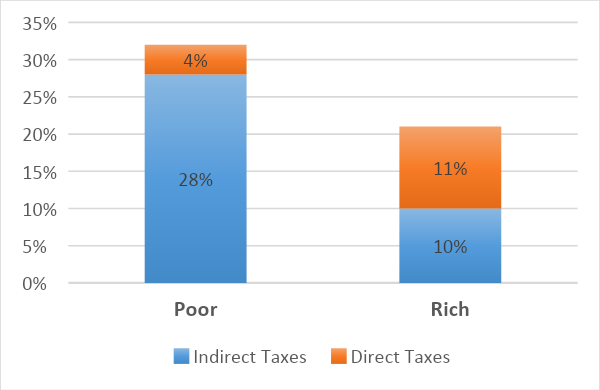 To summarize, the government takes from the relatively poor (taxation) and gives (1) fortunes to the rich (bribes to politicians and public contracts to some businessmen) and (2) alms to the extremely poor (small cash transfers or in-kind benefits).

Between 2003 and 2015, $59.6 billion was spent on Bolsa Família (Family Allowance), a social program for income redistribution that provides a monthly stipend (up to $62) and benefits to around 14 million low-income families every year (46 million people or 21 percent of the population). That is a lot of money, no doubt.

It happens that with Petrobras (Brazil’s government-owned oil company) alone, the total diverted (exposed by Operation Car Wash) may reach $14 billion, a fortune that was handed out to a few members of a select group of dishonest politicians and businessmen (less than 0.01 percent of the population). 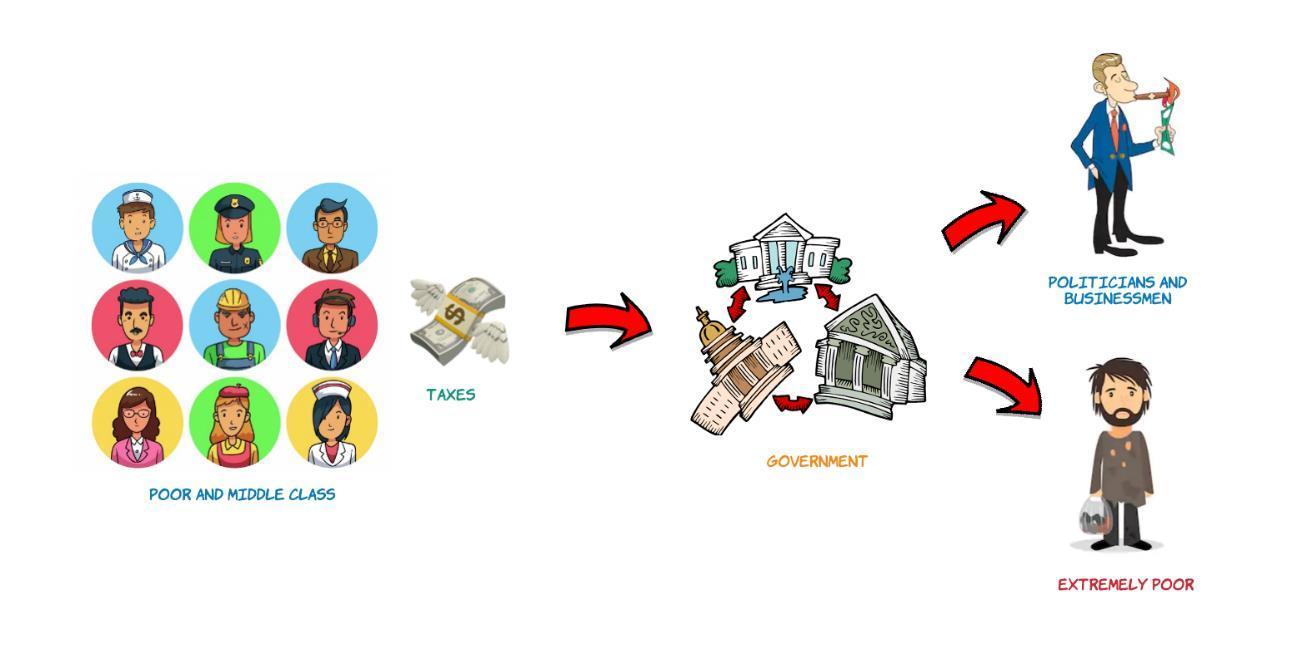 The Gap between Speech and Reality

As we can see, the Brazilian experience has confirmed that social democracy, like any other government (but with more means to do it), is a group of self-serving individuals who try to maximize their own interests by extracting money without regard for social good.

It is no wonder that when the role of government is enlarged, supposedly to solve social inequalities, the ruling caste that operates the public apparatus (and its friends who no longer want to compete in a fair market) quickly finds a way to burden the poor, as it happened—and still happens—in Brazil.