Struggling to Pay Back Your Student Loans? These States Will Revoke Your Job License

Millions are struggling to repay money they borrowed for an education they were told would set them up for financial success, but many states across the country have barred individuals from working if they have not yet paid off their loans.

Student loan debt is one of the biggest burdens to young Americans, recently ballooning to $1.5 trillion and topping car and credit card debt. Millions are struggling to repay money they borrowed for an education they were told would set them up for financial success, but many states across the country have barred individuals from working if they have not yet paid off their loans.

Fourteen states across the country currently impose policies to suspend, deny, or revoke occupational licenses from borrowers, preventing them from working and, ultimately, fully paying off their loans. This practice applies to a wide range of professions, from massage therapists, barbers, and firefighters to psychologists, lawyers, and real estate brokers.

With over 8.9 million recipients of federal student loans reportedly in default and as much as 40 percent of student loan borrowers at risk of defaulting on their payments by 2023, these restrictive policies only make it more difficult for them to work their way out of debt.

900 Florida health care workers received notices from the Board of Health notifying them that if they didn’t repay their student loan debt, they would have their licenses suspended.

In one recent example, last month 900 Florida health care workers received notices from the Florida Board of Health notifying them that if they didn’t repay their student loan debt, they would have their licenses suspended. Denise Thorman, a former certified nursing assistant in the state, lost her license last year because she fell behind on her payments.

“Your license is gone, your livelihood's gone, the care of your patients is gone. How fair is that?” she told local ABC affiliate WFTS last month.

The degree of enforcement of these laws varies from state to state, but those with such rules nonetheless claim the right to revoke professional licenses. In 2017, The New York Times reported there were “at least 8,700 cases in which licenses were taken away or put at risk of suspension in recent years” due to student loan defaults, “although that tally almost certainly understates the true number.” 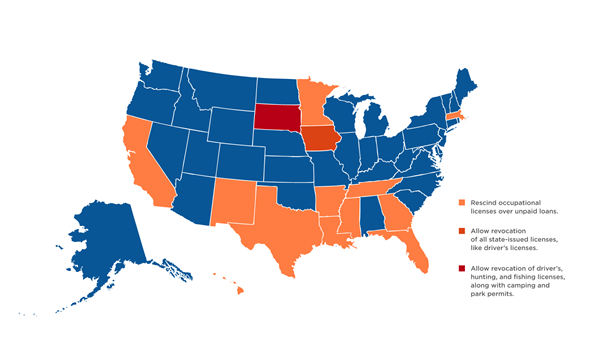 For many Americans, the opportunity to work in a specialized field was the reason they opted to go into debt in the first place. A bipartisan effort in the US Senate now seeks to prevent states from denying borrowers the ability to work because of delinquent loans.

Sens. Marco Rubio (R-FL) and Elizabeth Warren (D-MA) recently partnered to introduce the Protecting Job Opportunities for Borrowers (Protecting JOBs) Act (S.609). This is the second time they have proposed this type of legislation. The bill would “prevent states from suspending, revoking or denying state professional licenses solely because borrowers are behind on their federal student loan payments,” according to a press release issued last week by Rubio’s office. The legislation, which would give states two years after its passage to comply, offers protections for driver’s licenses, teacher’s licenses, professional licenses, and “a similar form of licensing to lawful employment in a certain field.”

“It is wrong to threaten a borrower’s livelihood by rescinding a professional license from those who are struggling to repay student loans, and it deprives hardworking Americans of dignified work,” Rubio said when announcing the legislation.

State policies revoking or suspending the licenses of delinquent student loan borrowers affect a surprising number of workers, largely because the number of occupations requiring a state-issued license has quadrupled since the 1950s.

“At the national level, nearly 20 percent of workers are now licensed, up from just 5 percent in the early 1950s,” researchers at the Institute for Justice (IJ) said in a recent report.

To their credit, some states have already moved to do away with these restraints on economic freedom.

IJ authors analyzed data from 36 states to calculate the burden of these government-issued licenses, estimating they cost Americans two million jobs annually. Further, they reported that “[b]y a conservative measure of lost economic value, licensing may cost the national economy $6 billion. However, a broader and likely more accurate measure suggests the true cost may reach $184 billion or more.”

To their credit, some states have already moved to do away with these restraints on economic freedom. Forbes reports that last year, “Alaska, Illinois, North Dakota, Virginia, and Washington all eliminated their default suspension laws for job licenses,” and eight more are considering similar legislation this year. The Kentucky legislature just passed a bill to prevent licensing agencies from suspending borrowers’ professional credentials.

The Root of the Problem

The federal government has played a central role in the student loan debt crisis and exploding costs of higher education. As FEE recently explained, the Higher Education Act of 1965, which put taxpayers on the hook for the loans made by private lending institutions, helped create the higher education bubble, which has seen a 1,600 percent increase in costs since its passage.

By the 1980s, student loan defaults were already becoming a problem. In 1990, the Department of Education followed the lead of a handful of states, like Texas and Illinois, which had already started imposing laws to restrict borrowers’ licenses if they fell behind on payments. “Deny professional licenses to defaulters until they take steps to repayment,” the department said in its lengthy guidance entitled “Reducing Student Loans Defaults: A Plan for Action.”

Nearly 30 years later, student loans continue to weigh down individuals and the economy as a whole. That the federal government issues loans to people, assisting their plunge into debt, and then advocates barring them from working to pay them off only adds insult to injury.

Carey Wedler is a video blogger and Senior Editor for Anti-Media.