Politicians are making things worse rather than better.

When I give speeches on the importance of public policy, I frequently share data showing that pro-market nations are relatively prosperous when compared to countries with statist policies.

One of the most dramatic examples is South Korean prosperity versus North Korean deprivation. 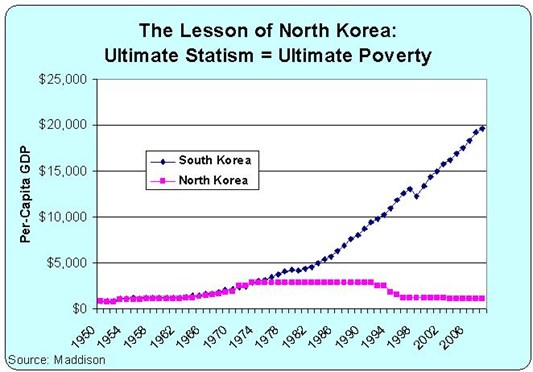 It’s not that South Korea is perfect. After all, it only ranks #35 according to Economic Freedom of the World.

But that’s enough economic liberty to be in the “most free” category, and this helps to explain why South Korean living standards have climbed dramatically compared to the economic hellhole of North Korea (and you see something similar if you compare Venezuela and South Korea).

I’m definitely not the only person to notice the difference between the two Koreas. Here are some excerpts from one of Richard Rahn’s columns in 2017:

In 1960, South Korea and North Korea were similar in their poverty. Now, 50-plus years later, South Korea has a per-capita income more than 20 times that of North Korea, at approximately $38,000 per year, which is higher than that of Spain or Italy. South Koreans have gone from a per-capita income in 1970 that was about 10 percent of the average American to almost 70 percent today. …Koreans in both the North and South come from the same genetic stock, speak the same language, and occupy adjoining pieces of land with much of the same topography and limited natural resources. North Korea is the ultimate consequence of socialism, which always contains the seeds of its own destruction. Socialism goes against human nature, requiring its government to become increasingly authoritarian—North Korea being Exhibit A.

But Rahn also warned that South Korea can’t rest on its laurels:

While economic growth per year averaged more than 9 percent from 1963 to 1990, it has now slowed down and last year was only 2.8 percent…a sharp drop from earlier decades. There is too much unneeded and counterproductive regulation, including the lack of ease of creating new businesses, barriers to imports and inward foreign investment. By any measure, South Korea has been a great success, but probably not as much as it could have been or can be if it followed more of a classic free trade and more limited-government model as practiced by Hong Kong and others. The country is increasingly exhibiting the disease of most other rich, developed democracies by allowing itself to be slowly seduced into the promise of more government services and attendant regulation, rather than the tougher and more competitive policies that created the wealth. Will South Korea avoid the stagnation of Japan and much of Europe? The jury is still out.

The jury may still be out, but there is growing evidence that South Korea is heading in the wrong direction because the nation’s relatively new president is increasing the burden of government.

Here are some passages from a report in the Japan Times:

Moon Jae-in began his second full year as South Korea’s president with a reminder of what didn’t work in the first—namely his economic policies. …The self-styled “jobs president” has seen his once sky-high poll numbers tumble… Moon, a progressive, was swept into office in 2017 promising a reversal from the conglomerate-focused economic agenda of ousted President Park Geun-hye. But his plan to raise the minimum wage 11 percent disappointed… More than three-quarters of the 30 experts surveyed by Bloomberg News last month predicted that employment growth would slow this year, in part because of the wage hike. …In a speech at his news conference Thursday, Moon…pledged to improve the safety net…and fix what he described as “the worst forms of polarized wealth and economic inequality in the world.” …More than half of South Koreans surveyed in another Gallup poll last month said that the administration needed “to focus on economic growth, rather than income distribution.”

By the way, the article doesn’t even mention that South Korea faces a major demographic challenge. 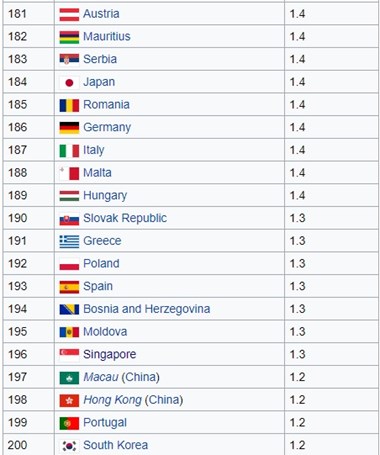 It has a catastrophically low fertility rate, which means that the tax-and-transfer welfare state will become increasingly unaffordable as the ratio of workers to recipients shifts in the wrong direction.

Entitlement reform is the sensible answer to this problem (see Hong Kong, for example).

But that’s obviously not happening under President Moon. Indeed, he wants to make matters worse by expanding the welfare state.

Some people in South Korea realize that demographics are a problem for their nation.

The U.K.-based Express looks at their attempted solution:

Seoul’s Dongguk and Kyung Hee universities say the courses on dating, sex, love and relationships target a generation which is shunning traditional family lives. …as part of the course, students have to date three classmates for a month each. …The course has expanded to Kyong Hee university, which offers “Love and Marriage” classes and Inha university in Incheon, a specialist engineering college, where students can now sign up to lessons on prioritising success and love. In 2016 the number of marriages hit its lowest since 1977, according to data from the government agency Statistics Korea. …The crude marriage rate—the annual number of marriages per 1,000 people—was 5.5 last year, compared with 295.1 when statistics began in 1970. Seoul has spent about £50 billion trying to boost the birth rate.

I’m skeptical of this approach, regardless of how much money the government spends.

And this is why South Korea’s lurch to the left is so disappointing. Politicians are making things worse rather than better.

Even the New York Times is reporting that Moon’s statist agenda isn’t working:

Under President Moon Jae-in, South Korea has raised taxes and the minimum wage in the name of economic growth. So far, it hasn’t worked out as planned. Growth has slowed, unemployment has risen and small-business owners…are complaining. …With his progressive policies, President Moon is trying to tackle some of the same economic problems that plague the United States and much of the developed world. They include a widening wealth gap, slower growth and stagnant wages. …South Korea’s troubles suggest the limits of the state in solving economic problems, especially without addressing the underlying structural issues. …After his election in May 2017, Mr. Moon undertook a sharp shift in economic policy. He supported higher wages, tighter restrictions on working hours and greater welfare spending, funded by tax increases on companies and high-income earners. …Mr. Moon has paid a steep political price for his agenda. His approval rating has plummeted from 84 percent in mid-2017 to 45 percent in the most recent Gallup poll. …The 2019 budget represents the sharpest increase in spending in a decade… The minimum wage has also gone up again for 2019, by 11 percent.

More taxes, more spending, more regulation, and more intervention. Who does Moon think he is, Barack Obama or Richard Nixon?

On a serious note, it surely says something that even the New York Times is forced to acknowledge that statist policies backfire.

Let’s close by looking at how South Korea’s economic freedom score has evolved over time. As you can see, there was a lot of economic liberalization between 1975-2005. That’s the good news.

The bad news is that economic liberty has declined since the mid-2000s.

The drop is modest, at least in absolute terms. But it’s also important (as I explained when looking at Italy) to look at relative competitiveness.

South Korea’s current score of 7.53 isn’t that much lower than its 7.67 score in 2006. But that slight drop, along with pro-reform steps that other nations have taken, means South Korea is now ranked #35 instead of #20.

And the current scores are based on policy in 2016, before Moon moved South Korea in the direction of more statism. This doesn’t bode well.

P.S. I’m not expecting South Korea to become another Hong Kong or Singapore, but it should at least seek incremental progress rather than incremental deterioration. Taiwan is a good example of that approach.