The common assumption is that Robin Hood was a redistributionist. This is false.

One of my pet peeves is when people characterize Robin Hood as some sort of left-wing redistributionist. As I’ve explained, that’s utter nonsense.

If you read the book or watch the movie starring Errol Flynn, Prince John and the Sheriff of Nottingham were the bad guys because they over-taxed the peasants. Robin Hood was the good guy because he rescued the money from the tax collectors and returned it to the people who earned it.

Kudos to Ted Cruz, who tried to educate (a poorly informed) Bernie Sanders on this topic.

Cruz accidentally promoted Prince John to King John (or is my aging memory betraying me and did Prince John declare himself King at some point?), but he’s 100 percent correct on the fundamental point. And now I’m wondering which modern leftists should play the roles of the bad guys from Robin Hood if there’s a remake of the movie. Perhaps Obama should be Prince John, which might be a better fit than the other movie roles people have imagined for our former president.

And the Sheriff of Nottingham obviously could be played by our corrupt IRS Commissioner. He would be a natural for the role.

But let’s not get too distracted. The focus today is on whether Robin Hood belongs to Occupy Wall Street or the Tea Party. This image reinforces the point that the latter is a better fit. 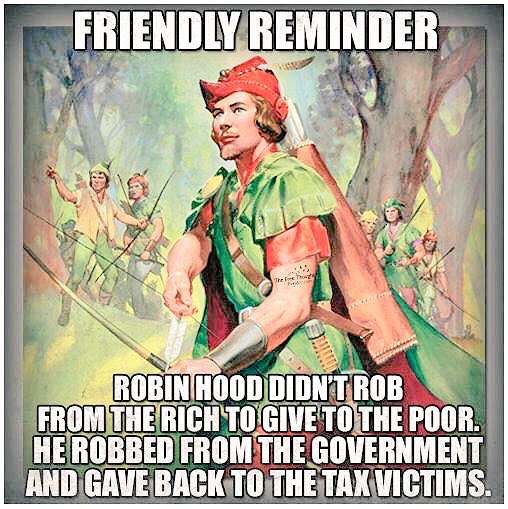 Just in case the message isn’t clear, here’s a nice clip from the cartoon version of Robin Hood.

I’m delighted that children actually were exposed to this message. I suggest sharing this clip widely with your kids, grandkids, nieces, nephew, etc, etc.

For what it’s worth, I also tried to correct the record about Robin Hood in a TV interview back in 2012.

P.S. Leftists aren’t the only people to mischaracterize Robin Hood, as I noted when discussing an otherwise-solid column by Cal Thomas.

P.P.S. Since Cal Thomas mentioned Robin Hood as part of a column explaining that Jesus wasn’t a socialist, I can’t resist showing Libertarian Jesus, who dispenses wisdom here and here.