Burton’s love of snow, resilient spirit, and punk-rock persona propelled him to start a company that would change the soul of snowboarding forever.

Jake Burton Carpenter, who took a piece of wood and rope and transformed it into a modern snowboard, a global $500 million dollar business, and Olympic sport, recently died at the age of 65. The founder of Burton Snowboards was diagnosed with a rare nerve disease in 2015 and made great progress in recovering, but also suffered from a recurring cancer, which resulted in his death on November 20 at a hospital in Burlington, Vermont.

It’s with great sadness as we all mourn the loss of snowboard pioneer, Jake Burton Carpenter. Thank you for all that you’ve done for our athletes and for shaping the sport of snowboarding into what it is today. Your legacy will live on forever! #RideonJake pic.twitter.com/DRLQlymBTG

Many might recognize the “Burton” name or logo—that goes hand-in-hand with snowboarding—but few likely realize that Burton completely transformed, popularized, and turned snowboarding into a respected sport and established community. It’s a story that began in a small barn in Vermont in 1977, where a young Burton’s love of snow, resilient spirit, and punk-rock persona propelled him to start a company that would change the soul of snowboarding forever.

Jake Burton (1954 - 2019) grew up in Cedarhurst, New York. At the age of 14, before snowboarding really existed, Burton got a “Snurfer.” A snurfer was a single ski with a rope attached to the front, which the rider would use for control. It was essentially a surfboard on the snow, of which it was named after. It had no metal edges or foot-bindings, as modern snowboards do.

Originally a crude toy for kids, Burton had a vision to transform the Snurfer into a respected piece of equipment, on par with skis. As Burton told Sports Illustrated in 1997,

I always felt there was an opportunity for it to be better marketed, for serious technology to be applied to it, so Snurfing could become a legitimate sport instead of a cheap toy. 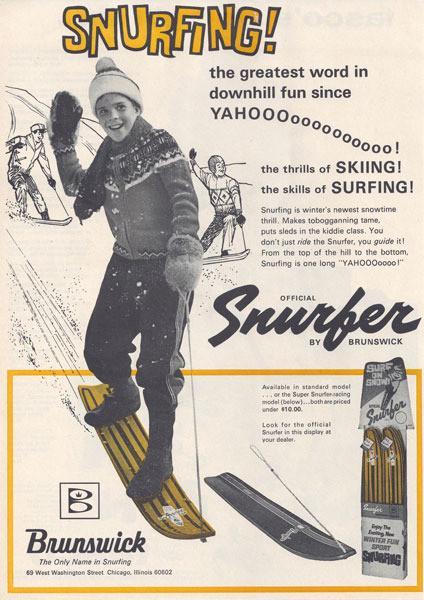 Before he would turn his dream into a reality, Burton described himself as a “proverbial ‘underachiever’ and wise *ss” and was even expelled from school.

When Burton was only 12, his older brother, George, was killed in Vietnam. Five years later, his mother died of leukemia, or as Burton states, “a broken heart from losing her son.” Even though faced with tragic circumstances at a young age, he found strength in adversity. “The losses made for two things,” Burton said, “real independence and an ability to persevere.”

Burton’s life after that became a series of successes and failures, a mix of startings and endings.

Burton faced a rough start early in life, yet he left this earth with his mark etched upon it.

Burton went on to a “second chance” boarding school and graduated as valedictorian. He moved to New York and started a small landscaping business. He then attended the University of Colorado Boulder (CU), where he tried out for the ski team and didn’t make the cut.

After becoming lonely and sad at CU, he moved back to New York to train thoroughbred horses, but quit that after seeing how they were mistreated. After that, he went back to school at NYU, graduated with a degree in economics, and started working at a small investment firm in Manhattan. After working long hours, Burton burnt himself out, and decided to pursue his passion, turning snurfing into a legitimate sport.

I was working 12-14 hours a day and not loving it. I also (in the back of my mind) knew that surfing on snow could become a sport. So I bailed on my New York job, moved to Londonderry, Vermont and started "Burton Boards" out of a barn in a house where I was the live-in caretaker and tending the two horses. By night, I bartended at the Birkenhaus Inn. By day, I built makeshift snowboard prototypes and tested them in the back hills of southern Vermont.

So at age 23, Burton dropped everything and started an uncertain business in a barn. (As a 23-year-old myself, it reminds me that if I ever feel stuck or unhappy, I have the ability to drop everything and start fresh. It’s also a reminder that in life, it’s ok to pursue the things I have a genuine interest in, even if those prospects might seem daunting or unreasonable.)

The Beginning of Burton

After tinkering with more than 100 different prototypes in that barn over several months, Burton finally had a snowboard he was pleased with, but the winter season was over and nobody was buying snow equipment.

Burton then spent the summer in Europe to test his prototypes, but then went into debt when the winter came around. To counter this, Burton had his friends build the boards while he focused on sales. He ended up selling 300 boards that winter, then 700 next winter, not even breaking even.

Later in life, reflecting on his initial sales in a 2017 interview with NPR, Burton recalled, “I remember once going out with 38 snowboards, visiting dealers in New York State, and came back with 40 because one guy gave me two back he had bought.”

Most resorts didn’t want their posh ski-culture disrupted by the hippie-bro-surfer-skater types that wanted to ride down the hill on one piece of wood instead of two.

Burton then purchased a house and barn for himself in Manchester, Vermont, which he transformed into Burton headquarters. He turned his barn into a snowboard factory, used his basement as the warehouse, made his living room the company’s storefront, and made his bedroom the office.

While he was ramping up production and sales, Burton encountered another problem: most ski areas wouldn’t allow snowboards on their slopes. They claimed insurance liability, but in reality, most resorts didn’t want their posh ski-culture disrupted by the hippie-bro-surfer-skater types that wanted to ride down the hill on one piece of wood instead of two.

This marked an important shift not only for Burton’s business, but the growth of snowboarding as a legitimate sport. Burton switched the focus of his business, originally just as a way for him to earn a living, to nurturing the sport and growing the community. Burton told StoryCorps,

After a couple of years, it became much more important to me that I was right about the decision that there was a sport there... And I focused not about my own material needs or accomplishments or whatever; I just thought about the sport.

Soon after Stratton Mountain loosened restrictions, other resorts followed suit, and Burton’s sales climbed. In 1984, he finally broke even. In 1985, he expanded globally, and started Burton Europe in Innsbruck, Austria.

According to “Battleground Sports,” Burton hit $1 million worth of sales in 1984. By 1995, his company would be worth more than $100 million. And with the skyrocketing sales, Burton’s brand exploded and established snowboarding as a modern extreme sports phenomenon.

Today, Burton’s brand crosses land and sea and captures a large market-share of the snowboarding industry. The Associated Press reports that as of 2015, annual sales were estimated at more than $500 million, selling at 30 flagship shops in America, and nearly two dozen more across Europe and Asia.

Throughout the last decade, snowboarders have accounted for more than 25% of visitors to mountain resorts in the United States. They have bankrolled a business worth more than $1 billion annually—a big chunk of which is spent on Burton gear.

As for Burton’s popularity and cultural impact, one need not look further than the existence of Winter X-Games, snowboarding in the Olympics, Dew Tour events, international snowboarding stars like Sean White and Chloe Kim, and the presence of the Burton brand in nearly every snowboarding shop in the world.

Jake Burton is responsible for pushing the once laughed-at sport into the esteemed spotlight it shines in today. Because of his technological innovation, snowboarders can now do stuff like this: (There’s no way you could do this on a Snurfer)

More than just being “the cool dad of the sport,” as said by Shaun White, who’s been sponsored by Burton since the age of 7, Jake Burton is the main reason snowboarding exists as we know it.

created the best snowboard company in the world when snowboarding wasn’t even a thing. He’s done everything for snowboarding, keeping it core and cool, but also growing it to huge levels.

Burton faced a rough start early in life, yet he left this earth with his mark etched upon it. Burton could have let the death of his brother and mother stop him. He could have called it quits after failing to turn a profit in the early years. He could have let the ban on snowboards on ski-mountains prevent him from expanding his business. Instead of letting all of these setbacks kill his dream of making snowboarding a reputable reality, Burton somehow persevered.

The psychiatrist and Holocaust-survivor Viktor Frankl once said that “to give light [one] must endure burning.”

Jake Burton was the torch that lit the path for the snowboarding community, and that light will continue to shine even though he’s gone. That’s no small feat.