Wealth inequality in the United States and many European countries, especially between the richest and the rest, has been a popular topic since Thomas Piketty’s Capital in the 21st Century was published. Piketty and others argue that tax data shows that wealth inequality has increased in the U.S. since the late 1970s, as seen in the figure below from a paper by Emmanuel Saez—Picketty’s frequent co-author— and Gabriel Zucman. 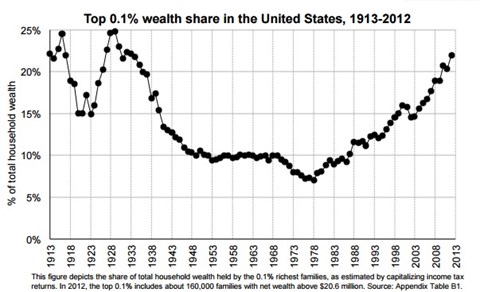 The figure shows the percentage of all U.S. household wealth that is owned by the top 0.1% of households, which as the note explains consists of about 160,000 families. The percentage fell from 25% in the late 1920s to about 7% in the late 1970s and then began to rise. Many people have used this and similar data to argue for higher marginal taxes on the rich and more income redistribution in order to close the wealth gap between the richest and the rest.

Modern occupational licensing is the legacy of these earlier, successful efforts to protect profits by limiting entry, often of “undesirables.”

While politicians and pundits continue debating what should be done, if anything, about taxes and redistribution, many economists are trying to understand what factors can affect wealth and thus the wealth distribution over time. An important one that is not talked about enough is competition, specifically Joseph Schumpeter’s idea of creative destruction.

Charles Jones, a professor at Stanford, has discussed the connection between profits and creative destruction and their link with inequality. To help illustrate the connection, Mr. Jones uses the example of an entrepreneur who creates a new phone app. The app’s creator will earn profits over time as the app’s popularity and sales increase. However, her profits will eventually decline due to the process of creative destruction: a newer, better app will hit the market that pulls her customers away from her product, erodes her sales and forces her to adapt or fail. The longer she is able to differentiate her product from others, the longer she will be in business and the more money she will earn. This process is stylized in the figure below. 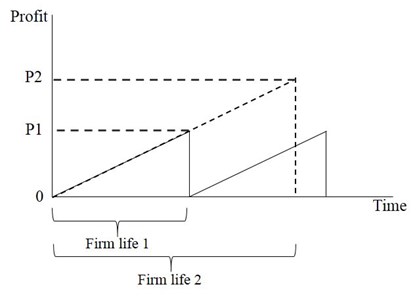 If the app maintains its popularity for the duration of firm life 1, the entrepreneur will earn profits P1. After that the firm is replaced by a new firm that also exists for firm life 1 and earns profit P1. The longer a firm is able to maintain its product’s uniqueness, the more profit it will earn, as shown by firm life 2: In this case the firm earns profit P2. A lack of competition stretches out a firm’s life cycle since the paucity of substitutes makes it costlier for consumers to switch products if the value of the firm’s product declines.

Restricting Entry to the Market

In 1984, 99 people on the list inherited their fortune and were not actively growing it. By 2014 only 28 people were in the same position.

Higher profits can translate into greater inequality as well, especially if we broaden the discussion to include wages and sole-proprietor income. Maintaining market power for a long period of time by restricting entry not only increases corporate profits, it also allows doctors, lawyers, opticians, and a host of other workers who operate under a licensing regime that restricts entry to earn higher wages than they otherwise would. The higher wages obtained due to state restrictions on healthcare provision, restrictions on providing legal services and state-level occupational licensing can exacerbate inequality at the lower levels of the income distribution as well as the higher levels.

Workers and sole proprietors in the U.S. have been using government to restrict entry into occupations since the country was founded. In the past such restrictions were often drawn on racial or ethnic lines. In their Pulitzer Prize-winning history of New York City, Gotham, historians Edwin G. Burrows and Mike Wallace write about New York City cartmen in the 1820s:

American-born carters complained to the city fathers that Irish immigrants, who had been licensed during the war [of 1812] while Anglo-Dutchmen were off soldiering, were undercutting established rates and stealing customers. Mayor Colden limited future alien licensing to dirt carting, a field the Irish quickly dominated. When they continued to challenge the Anglo-Americans in other areas, the Society of Cartmen petitioned the Common Council to reaffirm their “ancient privileges”. The municipal government agreed, rejecting calls for the decontrol of carting, as the business and trade of the city depended on in it, and in 1826 the council banned aliens from carting, pawnbroking, and hackney-coach driving; soon all licensed trades were closed to them.

The Importance of a Dynamic Economy

There are almost no good substitutes for EpiPen due to government policies that have insulated EpiPen’s maker, Mylan, from market competition.

Throughout America’s history the economy has been relatively dynamic, and this dynamism has made it difficult for businesses to earn profits for long periods of time; only 12% of the companies on the Fortune 500 in 1955 were still on the list in 2015. In a properly functioning capitalist economy, newer, poorer firms will regularly supplant older, richer firms and this economic churn tempers inequality.

The same churn occurs among the highest echelon of individuals as well. An increasing number of the Forbes 400 are self-made, often from humble beginnings. In 1984, 99 people on the list inherited their fortune and were not actively growing it. By 2014 only 28 people were in the same position. Meanwhile, the percentage of the Forbes 400 who are largely self-made increased from 43% to 69% over the same period.

But this dynamism may be abating and excessive regulation is likely a factor. For example, the rate of new-bank formation from 1990 – 2010 was about 100 banks per year. Since 2010, the rate has fallen to about three per year. Researchers have attributed some of the decline of small banks to the Dodd-Frank Wall Street Reform Act, which increased compliance costs that disproportionately harm small banks. Fewer banks means less competition and higher prices.

Another recent example of how a lack of competition can increase profits and inequality is EpiPen. The price of EpiPen—a medicine used to treat severe allergic reactions to things like peanuts—has increased dramatically since 2011. This price increase was possible because there are almost no good substitutes for EpiPen, and the lack of substitutes can be attributed to the FDA and other government policies that have insulated EpiPen’s maker, Mylan, from market competition. Meanwhile, the compensation of Mylan’s CEO Heather Bresch increased by 671% from 2007 to 2015. I doubt that Bresch’s compensation would have increased by such a large amount without the profits of EpiPen.

Letting firms and workers compete in the marketplace fosters economic growth and can help dampen inequality. To the extent that wealth inequality is an issue we don’t need more regulation and redistribution to fix it: We need more competition.

Republished from The Mercatus Center.

Adam Millsap is a PhD student in economics and a graduate instructor at Clemson University in South Carolina. His research interests are in urban economics and public choice theory. He is currently working in Washington, D.C. as an economic policy intern at the Reason Foundation.