Thanks to technological advances, previous economic truths have become a bit more nuanced. 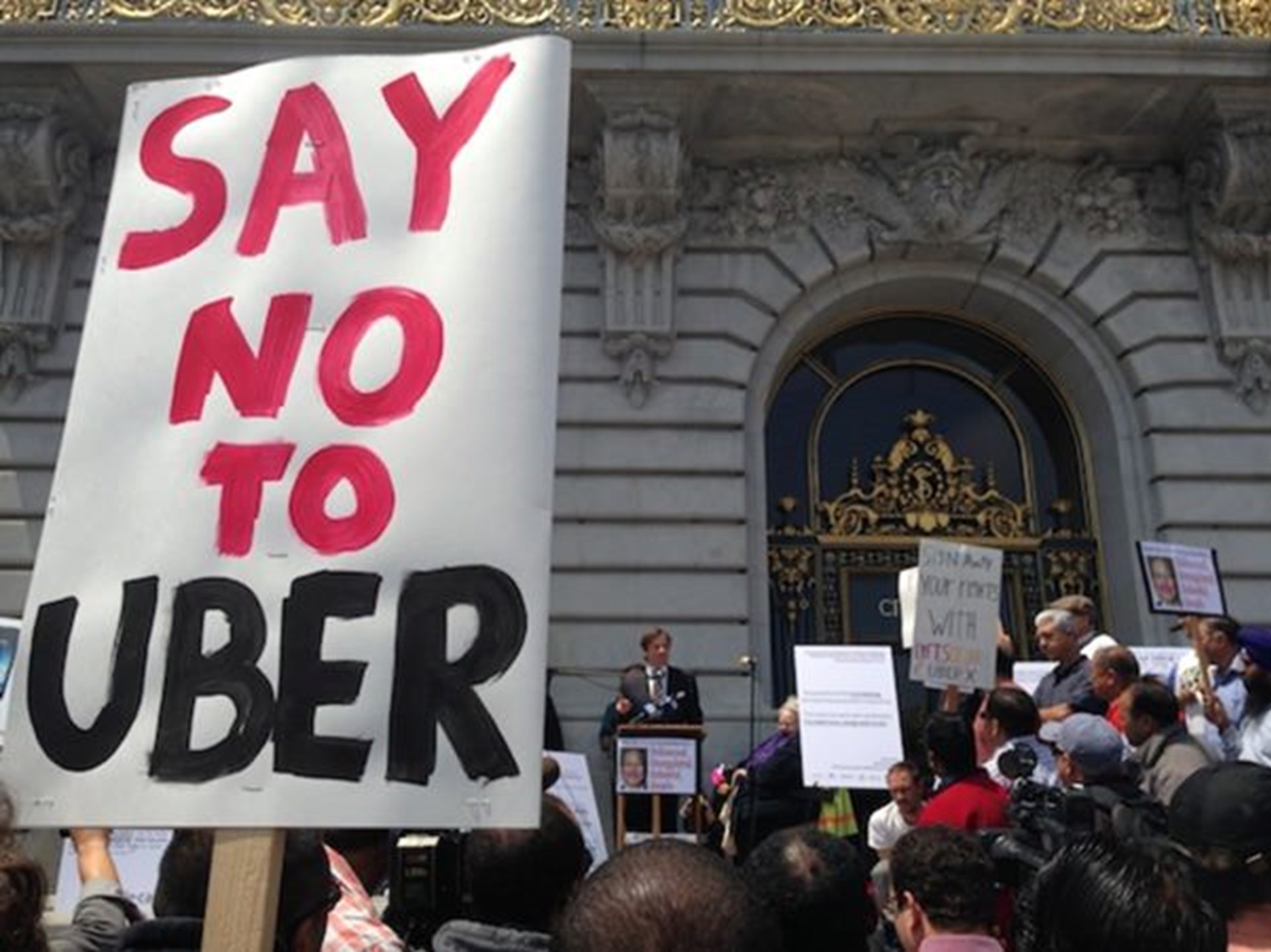 But thanks to technological advances, previous economic truths have become a bit more nuanced. With the arrival of “ride sharing” companies like Uber and Lyft, cars don’t necessarily lose value the minute they leave the proverbial lot. Nowadays they’re capital goods that their owners can utilize to transport passengers around in remunerative fashion.

As for depressed neighborhoods, since Uber and Lyft drivers aren’t limited geographically, or by city and state, it’s increasingly safe for venture home buyers to buy anywhere simply because ride sharing services make it possible for residents to get to and from their residences without walking potentially dangerous streets. While the uninformed sometimes create the impression that technology is the soulless enemy that will put us in breadlines, it is in truth an unrelenting driver of better opportunity, neighborhoods, convenience, incessantly falling prices, and yes, safety.

The genius of technology is the broad point of Jared Meyer’s new Encounter Broadside (No. 52), How Progressive Cities Fight Innovation. Contra the faux progressives fighting to maintain the commercial status quo that is presently being disrupted by the sharing economy, Meyer is offering a cheerful response: the sharing economy embodies the very economic progress without which there’s stagnation, plus it makes life much easier. As he confidently puts it, “the sharing economy enables transactions that used to be infeasible, time consuming, or cost prohibitive.”

Along the lines of the above, Meyer asks readers to imagine how individuals in the days before Airbnb would have been received had they gone “door to door asking home owners if they had an extra room to rent and for how much.” Nowadays we can summon a ride or a place to sleep anywhere in the world without a hint of discomfort, and we can do so with great speed. We can also do all of this quite safely.

Meyer references hitchhiking with safety very much in mind. It long carried with it rather unsafe connotations.  Figure that neither driver nor passenger had a clue about one another. Picking up a total stranger was a risky concept. Not so with Uber and Lyft. Meyer writes that during each ride, “The locations of both parties are tracked through the duration of the trips, identities are verified, and no cash changes hands because of the platform’s electronic payment systems.” Each portal offers the driver ratings of the prospective passenger, which allows the driver to skip those known to be unruly. Compare this to a driver stopping to pick up a hitchhiker, or for that matter a taxi driver stopping to pick up an individual on the street. There’s an anonymous quality to the old way of hailing a ride whereby neither is tracked from beginning of trip to end, identities are not verified, and cash frequently does change hands. While Uber and Lyft drivers greet us by name, cab rides are often occur sans conversation or knowledge, always without initial name recognition, and they’re nearly always untracked. This may explain why, according to Meyer, “taxi drivers are a leading perpetrator of sexual assaults by strangers, with fourteen women being raped by New York City taxi drivers in 2015.” Contrast that with Uber and Lyft where every ride is once again recorded. As Meyer quips, “if drivers commit crimes while working for Uber and Lyft, they must be doing so because they want to get caught.”

Meyer adds that in the past, transactions were “controlled, or at least greatly influenced, by businesses.” Not so much today. Trite as it may sound, information is power, and nowadays more and more individuals have a proverbial supercomputer in their pockets. They increasingly control their own consumptive destiny, but as Meyer would doubtless concur, successful transactions involve a happy buyer and seller. Not only has technology turned what Meyer describes as “dead capital” into working capital, sellers have information too. They can choose when to work, and they can finally reserve the right to refuse service. The sharing economy is about freedom, for both sides.

Yet per the Encounter title, there’s some resistance to that which is great. Meyer writes that “As technology continues to disrupt established business models, fights between innovators and special interests will intensify.” Much as 21,000 U.S. steelworkers can scare politicians into imposing tariffs on imported steel to the detriment of hundreds of millions of Americans, so can politically-connected industries find politicians willing to erect barriers to the business concepts and businesses set to replace the established order. The sharing economy threatens existing businesses, but perhaps more threateningly, it imperils the faux importance of politicians. Lest we forget, a simple app that we download onto our phones has broken politician-created taxi-cartels around the world. More crushing to the political class, ride hailing and house/apartment renting are likely just the beginning. How else will technology outrun always flat-footed politicians?

Owners of cars and homes should be free to exchange with whomever they choose.

And so they’ve begun erecting barriers. Cities like Nashville have passed ordinances that “mandated a 3 percent cap on the number of nonowner-occupied  homes in a neighborhood that could receive a short-term rental permit.” Luckily courts struck down parts of the Nashville law in 2016, but there are others. Until passage of SB 1350, Arizona had similar rules limiting the right of a property owner to rent it out, so did Boulder (CO), and then in October 2016 New York City instituted fines of up to $7,500 “for advertising a whole apartment that is for rent for less than thirty days.” The comical justification for the NYC law “was that Airbnb and other online short-term rental platforms drive up rents in New York City.” Meyer’s mocking response was that Airbnb listings “come out to just over 1 percent of the city’s three million housing units.”

In Austin, TX, Meyer writes that its City Council “pushed out ride sharing by regulating in search of a problem.” More ridiculous, it used “safety” as a reason for its demand that drivers be fingerprinted. It was all an obnoxious power grab. As Meyer reminds the reader, the “safety standards that Uber and Lyft voluntarily hold themselves to are even stricter than those required of Austin taxis.” After that, we can’t forget the previously stated truth that with the two California-based innovators, every ride is tracked, every driver and passenger known, and as Meyer reported in his first Encounter Broadside, each ride sharing service insures its drivers at much higher levels than do taxi companies. Thankfully Texas Governor Abbott stepped in recently with a bill that will bring both services back to Austin.  Reason and customer safety won again.

The main thing is that whether it’s houses, apartments or cars, owners of each should be free to exchange, rent and transport with them as they please. Neither Airbnb, nor Lyft nor Uber are forcing individuals to transact through them. Instead, each offers what Meyer describes as “total flexibility” whereby owners can transact a lot, or very little; thus “smoothing” their income. All this runs counter to lefty economic commentator Robert Reich’s witless contention that the employees of the three symbols of the surging “sharing economy” are victims of a “share the scraps” economy. In truth, the individuals who’ve enhanced their income (or who have attained handsome six figure incomes) have the ultimate deal such that they’re empowered to choose when they work. That many work part-time is, according to Meyer, a “feature” of the new economy, not a bug. He’s right.

Meyer’s broadside is valuable for telling a burgeoning story of entrepreneurialism, but also the inevitable governmental threats to what is undeniably disruptive change. In doing so, he unearths some important stats that reveal as odd the handwringing on a right wing properly prone to supporting the sharing economy.  Specifically, Meyer cites a Bentley University study which reveals that 2/3rds of millennials are eager to start a business. This of course runs counter to the always absurd right wing view that America’s twenty and thirty-somethings lean socialist.  About the previous contention, it’s a reminder that America’s right can be as alarmist as the always hysterical left.

Quibbles would mostly be with Meyer's correlation of poverty in Buffalo and Rochester (NY) with laws prohibiting Uber in both cities. While there’s no argument that some in both cities would eagerly drive passengers around both as a path to higher earnings, it can’t be forgotten that in the impoverished parts of the U.S., an opportunity is never far away. No one’s stuck in Buffalo or Rochester, as much as bad decisions or a lack of initiative keeps people in both. Uber can’t fix a lack of drive any more than legislation can.

As for the progressive cities that fight innovation, Meyer’s broadside features locales that mostly boom; Los Angeles, Nashville, New York, San Francisco, etc. Each is progressive, each is led by legislators who in various ways have erected barriers to the 1099 economy, but each is one of the more economically advanced cities in the U.S. Though Memphis has less stringent rules than Nashville has had with regard to the sharing economy, Nashville soars while Memphis largely implodes. Los Angeles, New York and San Francisco are all progressive in the truly lefty sense, but they’re the three richest cities in the U.S., and surely top 10 in the world. It would have been interesting if Meyer had addressed the crucial paradox indicating that some of America’s most advanced cities are also some of its most left-leaning.

Hopefully in a future book? For now, Meyer has written an important bit of commentary revealing just how much better, safer and opportunity-laden the U.S. has become in concert with the rise of the sharing economy. This is an important story to tell on its own, as is it important for Meyer to describe the threats to what is once again great.