I’ve periodically opined about why politicians should not try to control people’s behavior with discriminatory taxes, such as the ones being imposed on soda.

And I’ve cited some examples of how these taxes backfire:

If the following headlines are any indication, we can add Philadelphia to that list.

For instance, this story from the Philadelphia Inquirer:

Or this story from the local CBS affiliate:

These examples reinforce my view that it is not a good idea to let meddling politicians impose more taxes in an effort to control people’s behavior.

Some of my left-leaning friends periodically remind me, however, that there’s a difference between anecdotes and evidence. There’s a lot of truth to that cautionary observation.

To be sure, I could simply respond by saying a pattern is evident when a couple of anecdotes turns into dozens of anecdotes. And when dozens become hundreds, surely it’s possible to say the pattern shows causality.

That being said, it is good to have rigorous, statistics-based analysis if we really want to convince skeptics.

So let’s look at the results of some new academic research from scholars at Stanford, Northwestern, and the University of Minnesota. We’ll start with the abstract, which nicely summarizes their findings about the impact of Philadelphia’s big soda tax:

We analyze the impact of a tax on sweetened beverages, often referred to as a “soda tax,” using a unique data-set of prices, quantities sold and nutritional information across several thousand taxed and untaxed beverages for a large set of stores in Philadelphia and its surrounding area. We find that the tax is passed through at a rate of 75-115%, leading to a 30-40% price increase. Demand in the taxed area decreases dramatically by 42% in response to the tax. There is no significant substitution to untaxed beverages (water and natural juices), but cross-shopping at stores outside of Philadelphia completely offsets the reduction in sales within the taxed area. As a consequence, we find no significant reduction in calorie and sugar intake.

Here are some of their conclusions:

We draw several lessons about the effectiveness of local sweetened-beverage taxes from these analyses. First, the tax was ineffective at reducing consumption of unhealthy products. Second, in terms of revenue generation, the tax was only partly effective due to consumers substituting to stores outside of Philadelphia. Third, low income households are less likely to engage in cross-shopping, and instead are more likely to continue to purchase taxed products at a higher price at stores in Philadelphia. The lower propensity for low income households to avoid the tax through cross-shopping leads to a relatively larger tax burden for those households. In summary, the tax does not lead to a shift in consumption towards healthier products, it affects low income households more severely, and it is limited in its ability to raise revenue.

If you’re wondering why consumers responded so strongly, here’s a chart from the study showing the price difference after the tax was imposed: 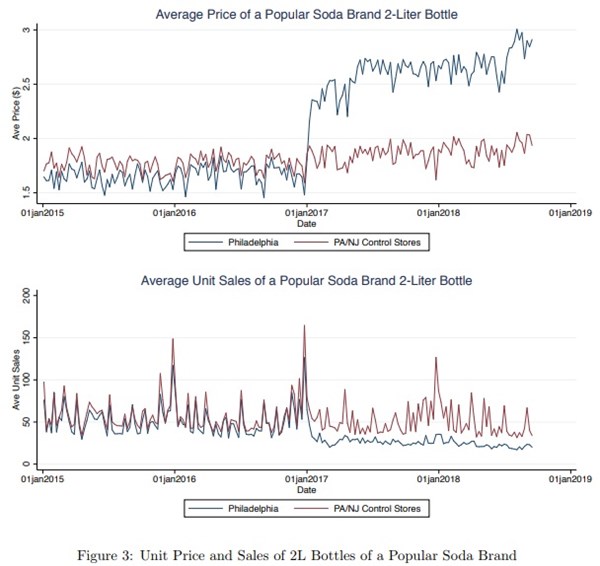 The bottom numbers in Figure 3 show that some sales still occurred in the city, but a persistent gap between city sales and suburban sales appeared. 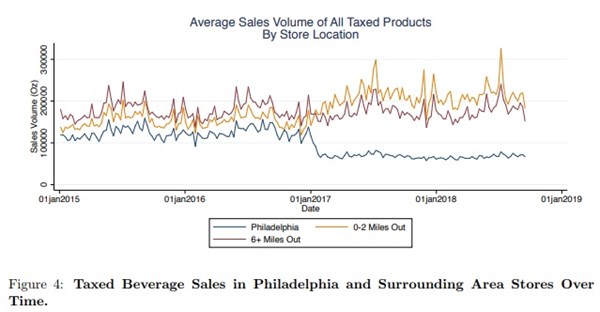 Wow. This data makes me wonder if suburban sellers will start contributing to the Philadelphia politicians who have generated this windfall.

Others have noticed how the tax is hurting rather than helping.

The Wall Street Journal opined about the failure of Philly’s soda tax:

When Philadelphia became the first major U.S. city to pass a soda tax in 2016, Mayor Jim Kenney said it would improve public health while funding universal pre-K. Two years in, the policy hasn’t delivered on that elite ideological goal. But the tax has come at the expense of working people… On Jan. 2, Brown’s Super Stores announced the closure of a ShopRite on Haverford Avenue. The supermarket is close to the city limit, and customers discovered they could avoid the soda tax by shopping outside Philly. …the once-profitable store began losing about $1 million a year. …That means fewer opportunities for workers with a criminal record. Mr. Brown’s supermarkets employ more than 600 of them, with the majority in Philadelphia. Some of the ex-cons have become his most-valued employees.

And Kyle Smith explained in National Review how the tax backfired:

Philadelphia’s outlandish soda tax is what Democratic-party politics looks like when it lets its freak flag fly. So many classic elements are there: (failed) social engineering and “think of the children!” on one side, paid for with a punitive tax on poor people and destroyed businesses, which means destroyed jobs, which in turn means lives upended. …Now that beer is, in some cases, cheaper than soda in Philadelphia, alcohol sales are up sharply. …the total loss attributable to the tax in sales of all items was $300,000 a month per store. Other, untaxed drinks also suffered sales declines within the city, suggesting people were simply saving up their shopping trips for when they left town.

I don’t feel compelled to add much to what’s been cited, though I will cite a headline from the Seattle Times to reinforce one of the points in the academic study about consumers bearing the cost of the tax rather than the soda companies:

And my one modest contribution to all this analysis is this comparison of the winners and losers from Philadelphia’s new tax:

For what it’s worth, similar comparisons could be developed for just about every action by every government. Academics call this “public choice,” while ordinary people realize it’s just common sense.