Yes, he’s still lovable ol’ Crazy Bernie, but he’s now being overshadowed by Congresswoman Alexandria Ocasio-Cortez, another out-of-the-closet socialist who somehow thinks America should be more like Greece or Venezuela.

Brian Riedl of the Manhattan Institute opines in National Review about AOC’s proposed tax hike on the rich. He starts with a very appropriate economic observation:

A 70 percent tax bracket would raise very little (if any) revenue, while damaging the economy and sending income and jobs overseas.

He then points out that we should look at both sides of the fiscal ledger. And the spending side of the left’s ledger is very crowded and very heavy:

…when assessing the needed tax revenues, a green-energy initiative costing $7–$10 trillion over the decade should be examined in the context of $42 trillion in additional Democratic-socialist proposals that include single-payer health care ($32 trillion), a federal jobs guarantee ($6.8 trillion), student-loan forgiveness ($1.4 trillion), free public college ($800 billion), infrastructure ($1 trillion), family leave ($270 billion), and Social Security expansion ($188 billion). …These spending promises are so stratospheric as to be incomprehensible — except to the far Left, which clings to the myth that simply taxing millionaires can finance a level of socialism that would make the Swedes start a tea-party movement.

He points out that there’s no way to finance the agenda of democratic socialists with class-warfare taxes, even if the AOC tax plan is dramatically expanded:

…a 100 percent tax rate on all income over $1 million…would raise 3.8 percent of GDP — not even enough to balance the current budget, much less finance a Green New Deal. And even that figure implausibly assumes that people continue working and investing. Slightly more realistically, doubling the top 35 percent and 37 percent tax brackets, to 70 percent and 74 percent for singles earning more than $200,000 and couples earning at least $400,000, would raise roughly 1.6 percent of GDP. That figure also ignores all revenues lost to the economic effects of 85 percent marginal tax rates (when including state and payroll taxes) as well as tax avoidance and evasion. …limiting the 70 percent tax bracket to incomes over $10 million…would raise only 0.25 percent of GDP — about $50 billion annually. …$50 billion is surely too high of an estimate, because the kind of people with incomes over $10 million also have teams of accountants and tax lawyers finding every conceivable tax loophole and overseas income shift.

Everything we know about the real-world impact of tax policy tells us that these soak-the-rich taxes won’t raise much—if any—revenue for the simple reason that upper-income taxpayers will alter the timing, level, and composition of their income.

But, as Brian noted, these taxes won't come close to financing the leftist wish list even if one makes absurd assumptions that behavior doesn’t change and the economy is unaffected.

So how do European nations finance their large welfare states?

Europe finances its generous welfare states through steep value-added taxes that hit the entire population. …Increasing federal spending by 21 percent of GDP to fund Democratic socialism — even after slashing defense — would require either a 55 percent payroll tax increase, or 115 percent value-added tax, according to CBO data. Acknowledging this brutal middle-class burden would immediately end any public flirtation with “free-lunch socialism.”

This is the most important takeaway from the column.

And it’s something that I’ve noted, as well. On more than one occasion.

If you want European-type handouts, you better be prepared to cough up a lot of money: 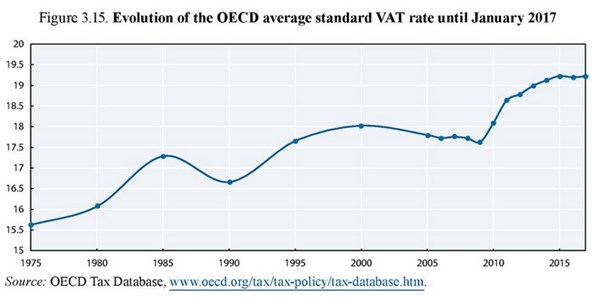 Simply stated, there is no way to finance a European-sized welfare state without pillaging middle-class and lower-income taxpayers.

This helps to explain why European living standards are significantly below American levels.

By the way, there is one final point from Brian’s column that is worth sharing.

A common liberal retort is that the economy survived 91 percent income-tax rates under President Eisenhower and 70 percent tax rates through the 1970s. That does not mean those policies raised much revenue. Tax exclusions and high income thresholds shielded nearly everyone from these tax rates — to the degree that the richest 1 percent of earners paid lower effective income-tax rates in the 1950s than today. In 1960, only eight taxpayers paid the 91 percent rate. Overall, today’s 8.2 percent of GDP in federal income-tax revenues exceeds that of the 1950s (7.2 percent), 1960s (7.6 percent), and 1970s (7.9 percent). Those earlier decades were not a tax-the-rich utopia.

The bottom line is that Alexandria Ocasio-Cortez’s economic agenda cannot be justified when looking at economic data, fiscal data, and historical data.

But we can say with great confidence that ordinary people ultimately will pay the heaviest price if her proposals get enacted since her class-warfare tax hikes will be a precursor for huge tax increases on the rest of us.