Politicians in Montreal have implemented Directive 10-289.

I’ve always viewed Ayn Rand’s most famous novel, Atlas Shrugged, as a warning about the dangers of over-regulation, over-taxation, and excessive redistribution.

I won’t spoil the plot for those who haven’t yet read the book, but it’s basically a story about what happens to a society when the people pulling the wagon decide that’s no longer how they want to spend their lives. 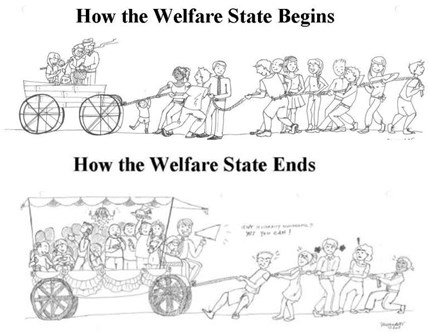 And as these highly productive people begin to opt out, politicians come up with ever-crazier ideas of keeping the economy going.

The most absurd example, something that could only happen in a dystopian work of fiction rather than real life, was “Directive 10-289,” an edict from the government to prevent continued contraction by requiring everybody in the economy to do exactly the same thing next year that they did this year. This meant no changing jobs. No starting new companies. No closing down existing companies. No changes in pay. Or employment. No changes in anything. Freeze the economy at current levels.

In other words, take Nixon-style wage and price controls and apply them to every bit of economic activity.

Unfortunately, some politicians think Atlas Shrugged is a direction manual rather than a warning. In Montreal, they’ve come up with a crazy idea to apply a version of Directive 10-289 to the restaurant industry. I’m not joking. In a column for Reason, Baylen Linnekin explains this surreal new policy.

…lawmakers in Montreal have moved to crack down on new restaurants, in an odious attempt to protect existing ones. “Montreal has one of the highest restaurant per-capita ratios in North America and the amount of places to eat is worrying local politicians,” reads a Canadian Press piece from earlier this week. …Data shows Montreal trails only New York City in terms of restaurants per capita in North America. As in New York City, that competition is great for Montreal’s consumers. But it puts pressure on incumbent restaurateurs. So lawmakers have decided to side with the latter.

The new law isn’t quite as bad as Directive 10-289, but it’s guided by the same attitude: Everything that exists now should be preserved and what’s new is bad.

…a ban on new restaurants from opening within 25 meters of an existing one along the city’s Rue Notre Dame… Notably, the action comes as “a number of commercial and retail properties remain empty” in this same part of Montreal. The law “risk[s] turning the city’s restaurant scene into a heavily bureaucratized nightmare like the province’s construction industry,” says the head of Quebec’s restaurant association

So who could possibly support such an initiative?

…some protectionist restaurateurs support the measure. “In Montreal you can apply for a restaurant permit and get it immediately—that’s a problem for me” says David McMillan, a supporter of the restrictions, whose high-end restaurant, Joe Beef, is an intended beneficiary of the ban. He’s not alone. “I don’t believe in the free market anymore,” says restaurateur Carlos Ferreira. “We have to protect the good restaurants.”

Gee, I thought consumers were the ones who were supposed to determine which restaurants are good. But Mr. Ferreira wants politicians and bureaucrats to now have the power.

Though we shouldn’t mock the Canadians too much. After all, Barack Obama imposed a version of Directive 10-289 in the United States.

Heck, he must be a big fan of Atlas Shrugged because he also mimicked another part of the book.

Of course, there are some cities, and even entire nations, that apparently want to replicate everything in Ayn Rand’s classic novel.

And the results in these real-world experiments are similar to what happens in the book. Except the book actually has a happy ending, whereas there’s little reason to be optimistic for a rebirth of freedom in places such as Greece and Venezuela.