Mirror, Mirror, on the Wall, Where Are Workers Pillaged Worst of All?

When deciding which country has the best (or worst) environment for workers, it's not as simple as just the tax rate.

Congratulations to Belgium. According to the new edition of Taxing Wages, average Belgian workers have the dubious honor of surrendering the biggest chunk of their income to government. No wonder part of the country is interested in secession.

We can also give (sincere, this time, rather than sarcastic) congratulations to New Zealand and Switzerland, which impose the lowest overall tax burden on the labor income of average workers (with honorable mention to Chile and Mexico for low tax burdens in developing countries).

Here’s the key data, which shows how much of an average worker’s wages are lost because of income and payroll taxes. 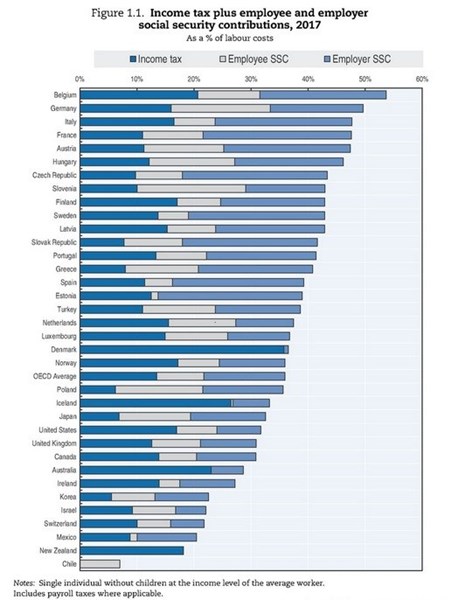 The United States, I’m happy to report, is in the bottom half, which means the government confiscates a below-average amount of money from workers.

Other nations with onerous burdens include Germany, Italy, and France.

Regarding the Belgian tax burden, the government understands this is bad news for Belgium’s economy, so there are periodic discussions about reducing the tax burden on labor income. Unfortunately, the potential “reforms” tend to be senseless tax swaps which would involve higher taxes on consumption or higher taxes on capital.

The bottom line is that it’s impossible to have a good tax system with a bloated government.

By the way, the previous chart looked at the tax burden on the average worker with no children. Some countries have preferential tax policies for households with kids. 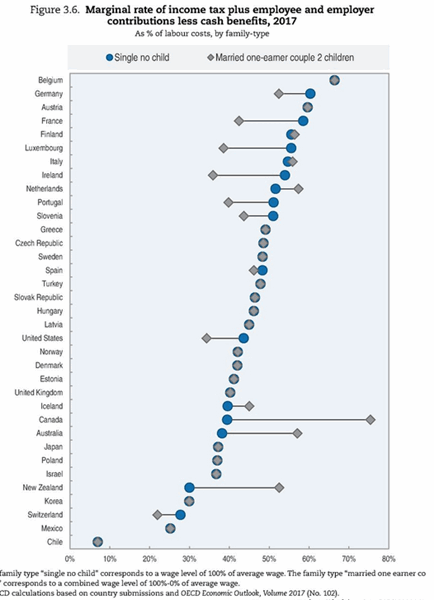 But you probably don’t want to have kids in Canada, Australia, and New Zealand. 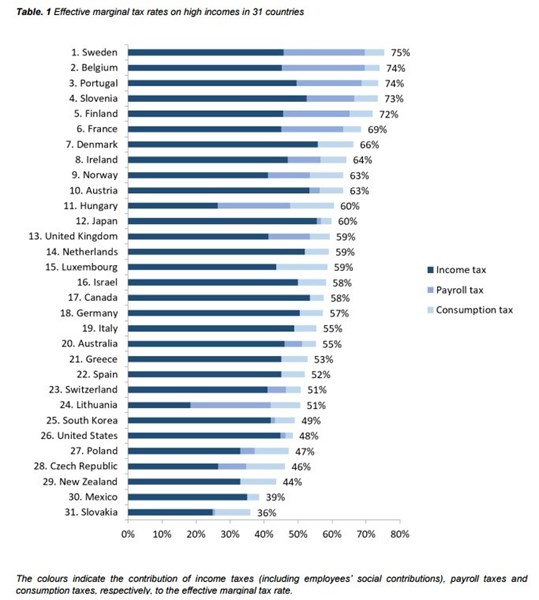 Let’s close with a couple of caveats.

First, we’re only looking at one slice of tax policy.

More specifically, this OECD data measures the tax burden on labor income, and it looks at that data only for middle-income workers.

It’s also important to consider tax rates for upper-income taxpayers since they tend to be the entrepreneurs and job creators. From this perspective, Belgium had the second-worst tax system for these households, slightly behind Sweden.

Nothing to brag about.

It’s also important to consider the overall tax burden on saving and investment. And there are several ways of looking at that data.

As you can see, Belgium doesn’t get high marks in these indices, but the United States invariably scores poorly.

Last but not least, there are many other policies—such as trade, regulation, and the rule of law—that also help determine a country’s competitiveness.

And while Belgium and other European nations have bad fiscal systems, they tend to score highly in other areas. Same for the United States.

The real key, of course, is to get good scores in all areas, like Switzerland, Hong Kong, and Singapore. Those are the best jurisdictions for workers, with good wages and low tax burdens.