"US Uncut" founder Carl Gibson is known for creating shocking, if dubious, viral memes about the economy.

On the progressive group’s Facebook page, he’s claimed that Switzerland is such an equal society because they have a minimum wage of $50,000 a year and strict caps on CEO pay (despite the fact Switzerland has no minimum or maximum wage laws). He’s also attributed Iceland’s success after the financial crisis to their government’s heroic refusal to bail out the banks (as long as we don’t count the $4.6 billion bailout they got from the IMF). His solution to the US national debt is to follow the example of Norway, which taxes oil profits at an astounding 78 percent and has no national debt (we’ll just assume he’s never typed “Norway national debt” into Google).

His heroic battle with facts continued last week in his column at the Huffington Post. This time he’s managed to single-handedly disprove “trickle-down economics,” a school of thought that doesn’t actually exist. In his words, “It’s official — trickle-down economics is bunk. Minnesota has proven it once and for all.”

What has Minnesota done? Hike the top income tax rate to 90 percent? Raise corporate taxes? Increase the minimum wage to $15 an hour? No, but under the governorship of Mark Dayton, who took office in 2011, Minnesota raised the state income tax rate on individuals earning over $150,000 (and households earning over $250,000) by a whopping 2 percentage points.

According to Gibson’s narrative, everything was on the wrong track in the Gopher State under the prior conservative governorship: “Between 2003 and late 2010, when [Governor Tim] Pawlenty was at the head of Minnesota's state government, he managed to add only 6,200 more jobs.… Between 2011 and 2015, Gov. Dayton added 172,000 new jobs to Minnesota's economy — that's 165,800 more jobs in Dayton's first term than Pawlenty added in both of his terms combined.”

While the global recession did have devastating impacts on the Minnesotan labor market at the end of Pawlenty’s term, it’s true that employment growth has been superior under his successor. In the first four years of Pawlenty’s tenure, employment in the state grew by 99,100 jobs, substantially less than the 182,100 in Dayton’s first four years. But is this really a result of progressive policies, or just the natural result of the economic recovery?

Gibson attributes Minnesota’s recovery to three of Governor Dayton’s policies: raising the minimum wage, raising taxes on the wealthy, and guaranteeing equal pay for women. But these changes were all quite small, and none corresponded with the turnaround in Minnesota’s employment, suggesting that they could not have been the cause. 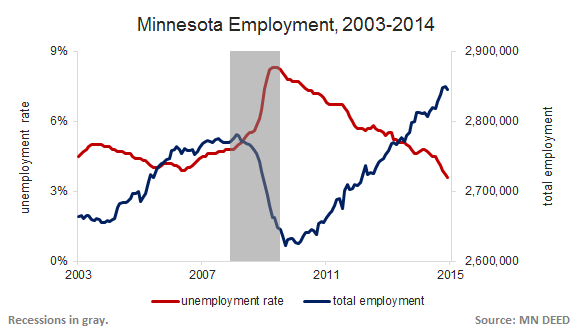 Considering that the federal minimum wage (which covers almost all hourly workers) is already at $7.25 per hour, a $0.75 increase in Minnesota’s minimum wage, applicable only to workers earning less than $8 an hour at businesses grossing more than $500,000 a year, isn’t exactly a radical move, nor would its effects be visible in raw employment data. Moreover, the minimum wage increase only went into effect in the summer of 2014, almost four years after Minnesota's job market began to recover.

Similarly, the Women’s Economic Security Act, which guarantees equal pay for women working for state contractors (not businesses in general) by certifying that they are in compliance with non-discrimination laws that already exist, wasn’t put into effect until May 2014.

And Dayton’s tax hike, which increased the top marginal tax rate by 2 percent? That didn’t occur until 2013, and it only increased state revenues by $1.1 billion (or 0.35% of Minnesota GDP).

In fact, all of the policies Gibson praises were implemented well after Minnesota started experiencing its impressive job growth, and they weren’t especially ambitious in the first place.

As for the supposed benefits of higher taxes, Gibson states that “even though Minnesota's top income tax rate is the 4th-highest in the country, it has the 5th-lowest unemployment rate in the country at 3.6 percent.” But this is the definition of a cherry-picked statistic. If you want to establish a correlation between top marginal tax rates and unemployment, you really have to use more than one data point and control for more than zero variables. (Speaking of cherry-picked statistics, among Midwestern states ranked by job creation from March 2013–2014, Minnesota ranked dead last).

The belief that higher minimum wages and higher taxes lead to better economic outcomes is not well-supported by the empirical evidence. Consider a study that found that reductions in state top marginal tax rates are associated with increases in income growth for all income quintiles (and vice versa). This result is diametrically opposed to Gibson’s depiction of reality.

Regarding the minimum wage, the empirical literature is mixed, but recent research by Jeffrey Clemens of the University of California raises some serious concerns. His analysis involved tracking thousands of real individuals across the country, comparing the experiences of low-skilled workers in states that increased their minimum wages to that of low-skilled workers in states that did not. Clemens and his co-author used a number of controls to ensure that their findings represented the actual effects of the minimum wage increase, rather than the effects of other variables. The results? Minimum wage increases had “significant, negative effects on the employment and income growth of targeted workers.”

Similarly, a study on economic freedom and income inequality in the states found that “reductions in both state minimum wages and tax burdens would be the most helpful in promoting higher levels, growth rates, and shares of income for the lowest quintile [that is, the poorest households].”

Clearly, controlled studies like these provide much more compelling evidence on the effects of minimum wage and tax hikes than a few uncorrelated data points scrounged from one state during a period of general economic recovery. It’s true that Dayton passed a few minor progressive policies during this time, but just because you jump in front of a parade doesn’t mean you’re leading it.

While Gibson and his ilk would like people to believe that interventionist policies are necessary for growth, research from the St. Louis Fed has found that, after controlling for other variables known to correlate with economic growth, states with less government interference in the economy experienced faster rates of employment growth than their interventionist peers. Other research suggests that the states with less economic intervention also tend to have lower unemployment rates and higher labor force participation rates.

Unlike Gibson, we will not be so ambitious as to claim that this evidence definitively debunks the entire progressive agenda. But we will suggest that there is compelling evidence that free markets work, and it can’t be refuted by a handful of cherry-picked data points from a single state.