Minimum Wage Fallout Is Caused by Government, Not Businesses

Employees don't magically become more productive because businesses have to pay them more, so they need to make up the losses elsewhere.

Both in Canada and in the U.S., many jurisdictions have “listened” to the people and enacted feel-good legislation like increasing the minimum wage, sometimes up to $15 an hour. Now that the consequences of such actions are being felt, people naturally blame… private corporations.

In Ontario, famous doughnut chain Tim Hortons sent a letter to all their employees saying that many of their benefits, such as paid breaks and dental benefits, will be scaled down or canceled altogether. Meanwhile, the Great Canadian Bagel chain has announced a price increase to pay for the newly imposed wages.

Unhappy with these changes, an Ottawa-based labor council set up a “bully hotline” so that employees can anonymously denounce employers who “violate the spirit of the new law.” Many “Timmies” regulars are even calling on a boycott of the chain to show their discontent.

In the U.S., a recent picture from a Subway restaurant in Seattle, Washington, shows the franchise owner stating that, because of all the costs incurred (including high minimum wage), he cannot accept one-dollar coupons for the footlong of the day.

It is almost a miracle that the chain hasn’t cut back on employees altogether. Market Forces Affect Everything

Who is to blame for those changes on both sides of the border? Unfettered-capitalist-neoliberal-puppy-eating-Koch-brother greed? Heartless managers who just want to exploit their workers?

No, the cutting back of hours, benefits, and discounts is a working of the markets, i.e. of every customer’s decisions. Since franchises like McDonald’s have, on average, a profit margin of 2.4 percent, the slightest sudden increase in costs will eat that margin away. It’s a highly competitive and difficult world; as much as 30 percent of Quiznos franchises default on their government-backed loans.

In Canada, for example, Ontario mandated an increase of the minimum wage from $11.60 to $14 this year, and to $15 next January 1. These respectively represent an increase of 20.7 and 29.3 percent. In order to keep up with the competition – and considering the high costs of owning a Timmies franchise – it is, therefore, no surprise that Ontario restaurants cut back on benefits.

It is almost a miracle that the chain hasn’t cut back on employees altogether. More and more in the U.S., fast-food restaurants are investing in self-serving kiosks in order to cut back on these brutal increases in wages. (Reminder: the federal minimum wage is $7.25. Increasing it to $15 would more than double that cost).

These developments should not surprise people who understand the basics of supply and demand. 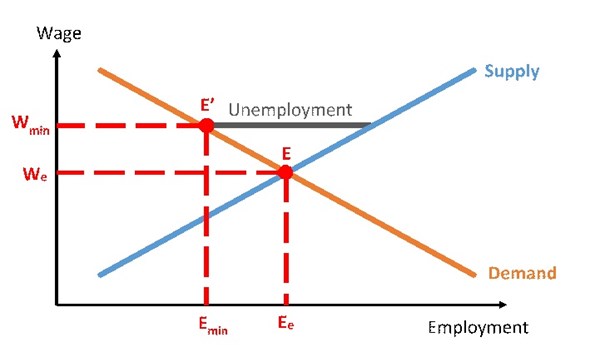 Normally, wages are determined at the intersection of supply (employees offering their services, the blue line) and demand (employers wanting workers, the orange line), the letter E. Since working in retail or restaurants requires little more than a high school diploma, that equilibrium is much lower than, say, a heart surgeon, who must endure years of training and study.

But when governments come and impose a minimum wage (the dark line), wages do increase… at the expense of workers. With a base wage now at E', more workers want to work but fewer employers want to hire because of the increased cost. The newly formed triangle is made of surplus workers, i.e. unemployed workers who can’t find a job. This unlucky Brian meme summarizes the situation of what minimum wage is: wage eugenics.

And don’t think it’s a vice; creating unemployment was the explicit goal of imposing a minimum wage. It was a Machiavellian scheme imagined during the so-called Progressive Era (late 19th Century to about the 1920s), where it was thought that governments could better humanity by “weeding out” undesirables – in other words, eugenics.

In the U.S., this eugenic attitude was explicitly aimed at African Americans, whose (generally) lower productivity gave them lower wages. To “fight” this problem nationwide, the Hoover administration passed, in 1931, the Davis-Bacon Act in order to impose “prevailing wage” (usually unionized) on all federal contracts. It was a thinly veiled attempt to “weed out” non-unionized workers, who were either African American or immigrant, in order to protect unionized, white jobs. Supporters of the bill, like Representative Clayton Algood, were very explicit in their racist intents:

That contractor has cheap colored labor that he transports, and he puts them in cabins, and it is labor of that sort that is in competition with white labor throughout the country.

But while the racist intent of the minimum wage has disappeared, its effect is always very real. It greatly affects the people it wants to help, i.e. low-skilled workers, and leaves them with fewer options. So don’t be fooled by unemployment statistics from the Bureau of Labor Statistics. Youth participation rates (ages 16-19) are still hovering around all-time lows (affected, among others, by minimum wage laws); this means that fewer of them are looking for jobs, decreasing unemployment figures.

It gets worse when breaking down races; only 28.8 percent of African American youth were working or looking for a job, compared to 31.6 for Hispanics and 36.7 percent for whites in December 2017.

In short, people in Ontario, and everywhere, should be directing their anger at their elected officials for imposing wage eugenics. Since private corporations don’t have access to unlimited amounts of cash, they have no choice but to make hard decisions in order to stay in business. This may include reduced hours, an increase in prices, firing people, or, in the worst cases, bankruptcy.