Mass Shootings Are a Horrible Way to Understand Gun Violence

Gun homicides have declined sharply in recent decades, but polls show most Americans are unaware of this fact.

Photo by Skitterphoto from Pexels

After each mass shooting, there is an outpouring of emotion. Grief. Shock. Sickness. Anger.

We saw all of these in the wake of the recent shootings in El Paso, Texas, and Dayton, Ohio. And because the issue is politically charged, we saw lots of blame. Democratic presidential candidates blamed the president and his Twitter rhetoric. The president blamed video games.

About 33,000 people are fatally shot in the U.S. each year. About two-thirds of these deaths are suicides.

Yet, despite what you may have heard, the frequency of mass shootings hasn’t changed much over recent decades.

In fact, such shootings are rare and account for a tiny fraction of overall gun deaths in America.

About 33,000 people are fatally shot in the U.S. each year. About two-thirds of these deaths are suicides. Another third of these are homicides, which have been steadily declining for decades. In 2015, some 13,286 people were killed in the U.S. by firearms in non-suicide related deaths. In 1993, that figure was 18,253. In most of the years in between, part of a decades-long trend of declining gun violence, mass shooting victims accounted for less than one-tenth of a percent of shooting victims.

The fact that gun homicides have plummeted in recent decades even as the number of firearms increased by about 50 percent and the U.S. population increased by 70 million is an important story. Unfortunately, it’s one few Americans know. 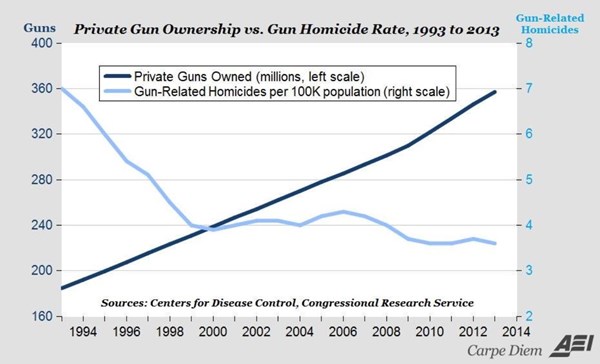 Polls show that just 12 percent of Americans believe gun violence has declined in the U.S., a reality they likely missed because of extended media coverage of mass shootings. This coverage is problematic for multiple reasons.

For starters, a 2018 working paper suggested that intense media coverage of mass shootings is actually perpetuating them. Economists Jay Walker and Michael Jetter wanted to better understand the motives of mass shootings. They explored a three-year data set (Jan. 1, 2013 to June 23, 2016), and their findings suggest "a positive and statistically significant effect of media coverage dedicated to shootings on the number of shootings in the subsequent week."

In other words, coverage of mass shootings appears to be encouraging them. But even if one doesn’t accept the premise that exhaustive media coverage is causing more mass shootings, it’s clearly distorting our perception of gun violence in America. This is a problem.

If we focus on mass shootings as a means of understanding how to reduce the number of people killed by guns in this country, we’re likely to implement laws that don’t do what we want them to do — and miss opportunities to make changes that really work. Gun violence isn’t one problem, it’s many. And it probably won’t have a single solution, either.

The U.S. has suffered seven mass shootings so far in 2019. These shootings have claimed the lives of 58 innocent people.

If no more mass shootings occur in 2019 (a big if), mass shootings likely will account for about one-tenth of 1 percent of gun fatalities in the U.S. The seven shootings are too many, and each of the 58 deaths is a senseless tragedy. Yet in a nation of 320 million, people die senselessly with jarring frequency. About 10 people drown every single day. Ten times that many die daily in motor vehicle accidents. As science writer Neil deGrasse Tyson pointed out, we lose 500 people to medical errors and 300 people to flu every 48 hours.

"Often our emotions respond more to spectacle than to data," he tweeted.

We should strive to better understand why people are increasingly seeking to unleash mass violence, but even as we do so we must keep mass shootings in perspective. In reality, the odds of dying in a mass shooting are extremely low, not much higher than being killed by a random blast of lightning, which claims about 44 American lives annually.

Perhaps most importantly, as we mourn the victims and try to understand what’s happening, we must not fan the anger, resentment, nihilism, and hatred that bubbles beneath the violence.

This article is republished with permission from the Daily Caller.