Mass Protest against Socialism in Venezuela: Minute by Minute

The PanAm Post is blogging live about the event.

Venezuela’s mega-protest against the Maduro dictatorship: Venezuelans take to the streets again today for a march of potentially historic proportions. The PanAm Post is blogging live about the event both here and on our Spanish site. 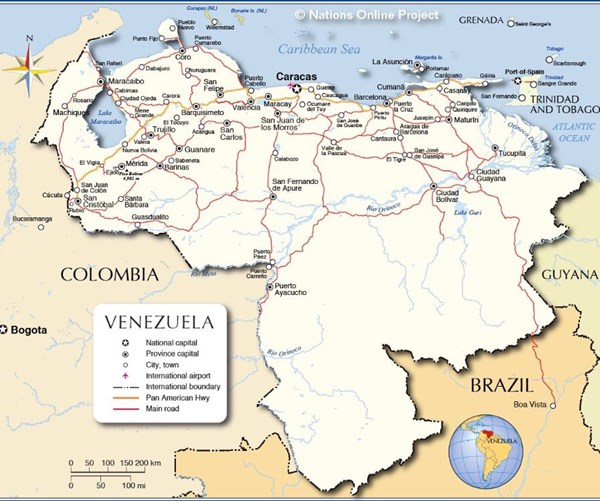 On April 19, Venezuela celebrates the 207th anniversary of the start of its independence movement against Spain, prompting the democratic opposition against dictator Nicolás Maduro’s dictatorship to organize marches in the streets of Caracas. The country remains under economic chaos, marked by severe shortages of food and medicine, hyperinflation, and an inept system of central planning controlled by Maduro’s cronies in the armed forces. Last week, Maduro sent helicopters to drop tear gas on protesters. This week, he announced plans to provide arms to 500,000 members of an untrained militia with the intention of combatting what he considers an “illegal effort” to topple his regime. These policy choices, coupled with pressure from the Organization of American States’ (OAS) increased effort to implement a Democratic Charter and the Supreme Court’s coup d’état against the National Assembly, have increased tensions in Venezuela.

It has been reported that a member of the Bolivarian National Guard was killed in San Antonio de los Altos. Three dead after today’s protests.

A group of Venezuelans in Peru has taken to the streets of Lima to protest against the Maduro regime.

400 people confirmed arrested during a day of massive nationwide protests.

Protests in the la Florida neighborhood.

The Venezuelan opposition announces march plans for tomorrow, with 26 meeting points along the march route, culminating in front of the Venezuelan public defender’s office.

Protesters in Bogota amass outside the residence of the Venezuelan ambassador to Colombia, in the north of the city.

The Democratic Unity Party (MUD) issued an official announcement in the wake of the protest marches and government repression this Wednesday. Governor Henrique Capriles announced a demonstration for this Thursday, April 20, at the Public Defender’s office.

“We can not allow the government to set the agenda…Tomorrow at the same time and in the same place!” concluded Capriles.

Veneuelan forum on criminal law announces: more than 270 detained in protests this Wednesday.

Opposition protesters managed to reach the public defender’s office in the states of Barinas and Carabobo.

The Colombian senate passed a resolution declaring that Venezuela’s democratic, constitutional order has been broken under the Maduro regime and asking the Ministry of Foreign Affairs to take concrete diplomatic measures:

Security forces have arrested at least 137 protesters in the last few hours in Venezuela.

Pollster Meganalisis states that 2.5 million people marched against Maduro today in Caracas and over 6 million marched nationwide. “The people are hungry and sick (of the regime).”

With more and more clashes between the security forces and civilians, opposition protesters keep on resorting to improvised barricades to protect themselves from state violence. These images are from the city of Mérida:

OAS chief Luis Almagro has condemned the Maduro regime’s use of repression and violence today:

The Chávez-Maduro regime has taken numerous news outlets off the air. The latest victim of their censorship: Colombia’s El Tiempo Televisión.

US Secretary of State Rex Tillerson has expressed his concern about today’s events in Venezuela:

A member of Venezuela’s feared National Guard spontaneously joined the anti-Maduro protests in Valencia. If more servicemen follow his lead and disobey their superiors, could this become a Harald Jaeger moment?

The PanAm Post‘s Orlando Avendaño says that today’s protests in the city of Valencia are the largest in recent history:

After protesters filled the streets of Valencia, the Chavista authorities shut off access to all major roadways, the PanAm Post‘s Orlando Avendaño reports.

The Venezuelan press reports that the young woman killed in San Cristobal was the victim of Chavista paramilitary groups.

Anti-Maduro protesters have torn down a fence at an Air Force base in eastern Caracas. The regime has responded with aggression from the start, and some demonstrators are not intent on keeping today’s protests entirely peaceful.

A 24 year-old woman has been killed during protests in the western city of San Cristobal. This is the Maduro regime’s second known casualty today following the death of a 17 year-old economics student shot in the head in Caracas.

In a speech to his followers (awfully few compared to the anti-Chavistas protesting at this very moment across Venezuela), dictator Nicolás Maduro blamed today’s violence on Julio Borges, an opposition congressman who was himself attacked by Chavista paramilitaries last year, and threatened him with legal action. Maduro added that, today, he is “more Chavista than ever before.”

The western city of San Cristobal, located near the border with Colombia, is also the scene of massive protests against Maduro.

A young man who suffered a wound to the head is evacuated via motorcycle:

Civilian opposition groups set up a barricade to protect themselves from official Chavista forces. Paradoxically the communist regime is forcing the democratic opposition to adopt the tactics of the Paris Commune.

Several members of the National Guard drag a Venezuelan woman on the street.

Members of the opposition denounce the presence of armed paramilitaries standing next to the National Guard in Caracas:

The protests in the gulf city of Maracaibo have turned into a street battle between demonstrators and the Chavista forces:

Venezuelans are giving the world a lesson in courage today as the anti-Chavista marches proceed despite the regime’s thuggery.

This scene is from Caracas today. Those who called today’s protest “the mother of all marches” likely did not exaggerate.

More scenes from Maracaibo’s massive protests against dictator Maduro. The Chavista regime faces a nation-wide movement which appears to be venting its frustration as seldom before. How long can Maduro resist without turning to even worse repressive measures? Tear gas alone seems to have failed to intimidate the opposition and civil society.

Lilian Tintori, wife of Leopoldo López, a political prisoner, warns that protesters in western Caracas are trapped as Chavista forces launch tear bombs against them from two flanks:

Things are turning ugly in the city of Maracaibo as Chavista forces attack protesters:

Citizens of Valencia show their own strength in numbers as they gather against the Chavista regime:

Venezuelans are not cowed by Maduro’s aggressions. The Francisco Fajardo Highway in Caracas is full to the brim:

Despite the regime’s heavy-handed tactics and widespread use of tear gas, the Venezuelan opposition to the Maduro dictatorship has mobilized an impressive number of citizens today:

The National Guard repels protesters with high-powered water hoses, from a vehicle nicknamed “The Whale”, on Francisco Fajardo Highway in Caracas:

17 year-old economics student Carlos José Moreno confirmed dead after receiving a gun shot in the back of the head during today’s anti-Maduro protests.

The Venezuelan citizenry comes out en masse against the Maduro dictatorship:

Members of the National Guard refuse to allow opposition congressmen and their followers to pass through their blockade.

The streets of San Cristobal turn violent as the Maduro regime’s forces march against the civilian opposition.

Protesters in Caracas throw themselves into the Gauire river in order to escape the tear gas which the Maduro dictatorship has used the entire day against peaceful demonstrators:

The tally of injured protesters rises:

Lilian Tintori, wife of Leopoldo López, a political prisoner, calls for peaceful protests as the Maduro regime steps up its repression:

The current state of Francisco Fajardo Highway in Caracas:

Strong showing for the opposition in the city of Valencia:

Protesters in the city of Maracaibo also face the Maduro regime’s violence and generous use of tear gas.

Opposition leader Henrique Capriles tweets about “heavy repression” on a Caracas highway, where citizens who oppose the Maduro dictatorship face attacks from the security forces.

An economics student was injured by gunfire during the protests. He is undergoing surgery in Caracas.

A Chavista gang of motorcyclists head toward Plaza Venezuela in Caracas in order to confront critics of the Maduro dictatorship.

Protesters in Carabobo state march toward a highway as soldiers prepare to clash with them.

12:20 PM
Supporters of Voluntad Popular, the political party led by Leopoldo López, a political prisoner of the Maduro regime, protest in the state Zulia:

12:15 PM
Protesters in the coastal city of Cumaná:

12:10 PM
Twitter users denounce the regime’s repression against protesters, this time in the state of Guayana, where security forces assaulted a woman demonstrator.

11:54 AM
Venezuela’s Attorney General calls on the security services to respect citizens’ right to protest.

11:15 AM
Opposition demonstrators gather in Altamira square in Caracas as they prepare to march on the adjacent highway: