Low-Cost Private Schools Are Leaping Ahead in the Developing World

Education is changing, and it's the poor who are innovating fastest 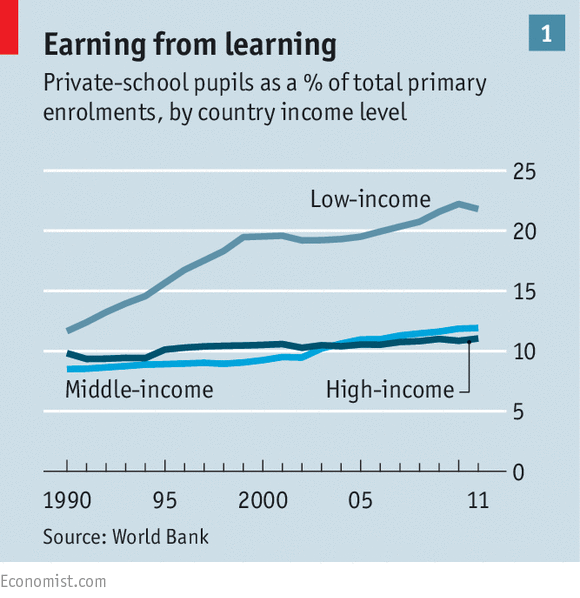 Private schools for the poor are growing rapidly throughout the developing world. The Economist has a review:

Private schools enroll a much bigger share of primary-school pupils in poor countries than in rich ones: a fifth, according to data compiled from official sources, up from a tenth two decades ago (see chart 1).

Since they are often unregistered, this is sure to be an underestimate. A school census in Lagos in 2010-11, for example, found four times as many private schools as in government records.

UNESCO, the UN agency responsible for education, estimates that half of all spending on education in poor countries comes out of parents’ pockets (see chart 2). In rich countries the share is much lower.

Overall, there is good evidence that private school systems tend to create small but meaningful increases in achievement (e.g. here, here, here, here) and especially good evidence that they do so with large costs savings. The large costs savings suggest that with the right institutional structure, which might involve vouchers and nationally comparable testing, an entrepreneurial private sector could create very large gains.

Karthik Muralidharan who has done key work on private schools and performance pay in India puts it this way:

Since private schools achieved equal or better outcomes at one-third the cost, the fundamental question that needs to be asked is “How much better could private management do if they had three times their current level of per-child spending?”

The Economist notes that another promising development is national chains which can scale and more quickly adopt best practices:

Bridge International Academies, which runs around 400 primary schools in Kenya and Uganda, and plans to open more in Nigeria and India, is the biggest, with backers including Facebook’s chief executive, Mark Zuckerberg, and Bill Gates. Omega Schools has 38 institutions in Ghana. (Pearson, which owns 50% of The Economist, has stakes in both Bridge and Omega.) Low-cost chains with a dozen schools or fewer have recently been established in India, Nigeria, the Philippines and South Africa.

Bridge’s cost-cutting strategies include using standardised buildings made of unfinished wooden beams, corrugated steel and iron mesh, and scripted lessons that teachers recite from hand-held computers linked to a central system. That saves on teacher training and monitoring.

The Economist is somewhat skeptical of scripted lessons, known as Direct Instruction in the education world, but in fact no other teaching method has as strong a record of proven success in randomized experiments (see also here and here).

Need I also point out that online education can bring some of the best teachers in the world to everyone, everywhere at low cost?

An article in Technology Review titled India loves MOOCs points out that students from India are a large fraction of online students (FYI, we are also finding many Indian students at Marginal Revolution University)

Throughout India, online education is gaining favor as a career accelerator, particularly in technical fields. Indian enrollments account for about 8 percent of worldwide activity in Coursera and 12 percent in edX, the two leading providers of massive open online courses, or MOOCs. Only the United States’ share is clearly higher; China’s is roughly comparable.

Education is changing very rapidly, and it’s the developing world which is leading the way.