Life Expectancy Is Up, and Health Inequality Is Down

We have heard a great deal about increases in mortality among white, non-Hispanic, middle-aged Americans (especially women), but to state the case is also to note that this is one group among many. In an excellent new paper, Currie and Schwandt discuss the good news — overall life expectancy is up, and health inequality is down, in some cases dramatically. Here, for example, is life expectancy at birth by gender and year. 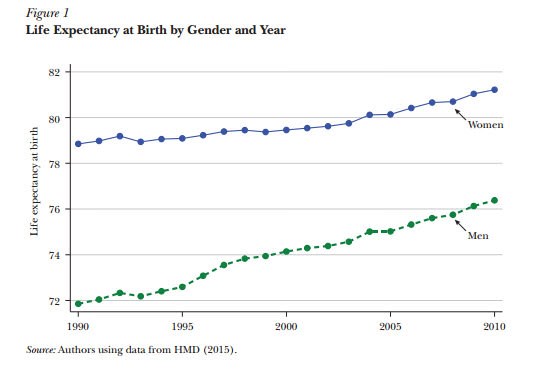 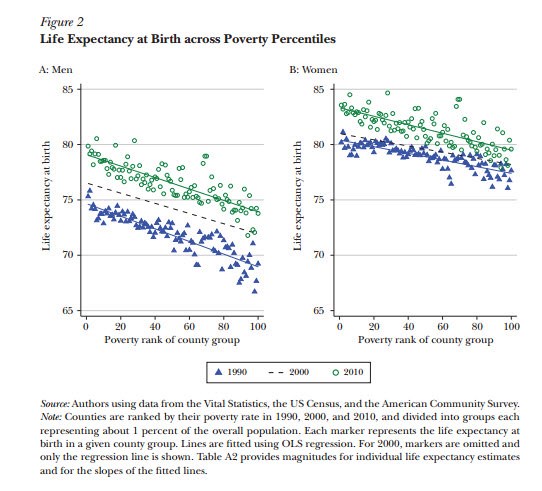 The news is good and may get better. Between 1990 and 2010 mortality rates for children ages 0-4 fell especially dramatically and especially so in poor counties. Moreover, since mortality at older ages is often baked in by poor health at younger ages, there is significant opportunity for these gains to persist over time.

The New York Times also reported yesterday on inequality in life expectancy across race. It’s down.

Blacks are still at a major health disadvantage compared with whites. But evidence of black gains has been building and has helped push up the ultimate measure — life expectancy. The gap between blacks and whites was seven years in 1990. By 2014, the most recent year on record, it had shrunk to 3.4 years, the smallest in history, with life expectancy at 75.6 years for blacks and 79 years for whites.

Part of the reason has been bad news for whites, namely the opioid crisis. The crisis, which has dominated headlines — some say unfairly, given racial disparities — has hit harder in white communities, bringing down white life expectancy and narrowing the gap.

The Currie and Schwandt paper is also very good on describing how these estimates are produced and some of the data issues with making these estimates. It’s a must read for those interested in these issues.