Let Stem Cell Donors Be Paid. Lives Depend on It

Each of the compensation objections are fundamentally flawed.

I’m proud to release a new report, Bone Marrow Mismatch: How compensating bone marrow donors can end the transplant shortage and save lives. The report analyses the science and ethics behind the Health Resources and Services Administration’s (HRSA) proposed rule to redefine hematopoietic (blood-forming) stem cells (HSC) as an organ. These are the cells that originate in bone marrow but are also found in the bloodstream. Today, over 70% of HSC donations are extracted from the bloodstream through a safe, non-invasive technique known as apheresis, after which the cells quickly regenerate. 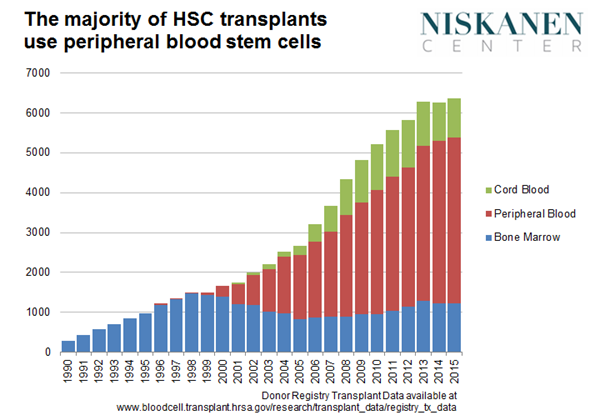 In 2011, a federal court ruled compensating donors of HSC by apheresis to be legal due to the procedure’s comparability to plasma and whole blood donation. HRSA’s rule change would supersede the court and violate congressional intent, thereby making compensation to all HSC donors illegal under the National Organ Transplant Act. HRSA has until December 18th to move forward on its rule.

Why is this important?

Nearly 2% of the U.S. population is a registered bone marrow donor. And while the volunteer donor registry has grown in recent years, it remains both too small and beset by low follow-through rates. Using the best available data, this paper estimates that the gap between the actual and optimal size of the bone marrow registry leads to 1318 fewer transplants and 275 deaths per year – creating a net social cost well in excess of $100 million a year. This impact is felt disproportionately by racial minorities, for whom finding a close genetic match is most difficult. I, therefore, argue that legalizing compensation for HSC donors would help to close that gap by increasing registry size among target populations while improving follow-through rates of those who are called upon to donate. 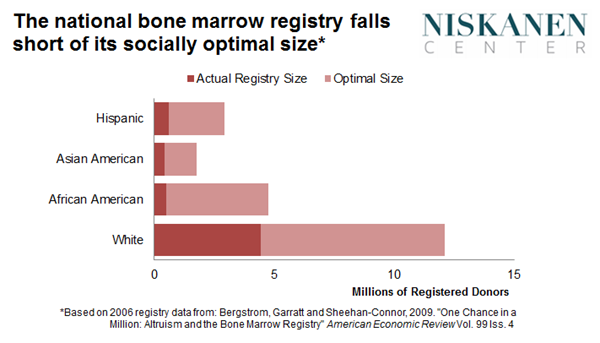 According to another estimate, in 2012 the unmet demand for HSC transplants across the United States was 10,276 adults, out of a total demand of 16,096 for the same population. In children, the unmet need was 3,213 out of a total demand of 4,561. Together, that implies an overall shortfall in demand of 65%. The demand for HSC transplants has accelerated as the population has aged, with adults ages 51 to 64 receiving 32 percent of all transplants. This suggests the supply shortfall will only widen if no further action is taken. 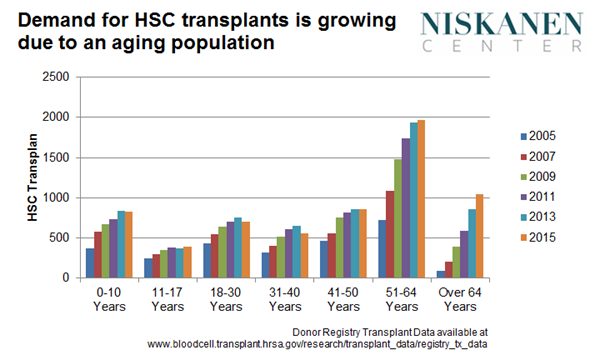 HRSA is concerned that legal compensation could cause exploitation, devalue the human body, and/or reduce the altruistic motivation of donors. In a September 7, 2016, open letter to HRSA, twenty-two of the country’s most prominent ethicists argued that each of these objections are fundamentally flawed. In that time the list of signatories has grown to thirty-seven. This report goes deeper into disputing HRSA’s weak ethical objections and outlines the strong positive case for compensation. The Niskanen Center thus joins the signatories of the letter found at DonationEthics.com in demanding that this rule not be enacted. At stake are thousands of leukemia and anemia patients that face preventable death due to a self-inflicted shortage of bone marrow donor matches.

In writing this report I am indebted to the tireless work of the Institute for Justice, an early champion of bone marrow compensation; Peter Jaworski, who brought the issue to my intention and created DonationEthics.com; and Doug Grant, CEO of Hemeos, a healthcare start-up wishing to compensate donors for their peripheral blood stem cells. The research of economist Mario Macis has also been incredibly useful for building the case that compensation for blood and blood-derived cells is both safe and efficient.

This first appeared at Niskanen Center.