It's Long Past Time to Cut Corporate Tax Rates

America’s anti-competitive corporate tax rate is the highest in the developed world and creates big disadvantages for American workers and companies.

The centerpiece of President Trump’s tax plan is a 15 percent corporate tax rate.

Republicans in Congress aren’t quite as aggressive. The House GOP plan envisions a 20 percent corporate tax rate, while Senate Republicans have yet to coalesce around a specific plan.

Notwithstanding the absence of a unified approach, you would think that the stage is set for a big reduction in America’s anti-competitive corporate tax rate, which is the highest in the developed world (if not the entire world) and creates big disadvantages for American workers and companies.

While I am hopeful something will happen, there are lots of potential pitfalls, including the “border-adjustable tax” in the House plan. This risky revenue-raiser has created needless opposition from major segments of the business community and could sabotage the entire process. And I also worry that momentum for tax cuts and tax reform will erode if Trump doesn’t get serious about spending restraint.

What makes this especially frustrating is that so many other nations have successfully slashed their corporate tax rates and the results are uniformly positive.

My colleague Chris Edwards recently shared the findings from an illuminating study published by the London-based Centre for Policy Studies. It examines what’s happened in the United Kingdom as the corporate tax rates has dropped from 35 percent to 20 percent over the past 30 years. Here’s some of what Chris wrote about this report.

New evidence comes from Britain… It shows the tax rate falling from 35 percent to 20 percent since the late 1980s and corporate tax revenues as a percentage of gross domestic product (GDP) trending upwards. As the rate has fallen, the tax base has grown more than enough to keep money pouring into the Treasury. …the CPS study says, “In 1982-83 when the rate was 52%, corporation tax receipts yielded revenues equivalent to 2% of GDP. Corporation tax now raises over 2.3% of GDP when the headline rate is at just 20%.”

And keep in mind that GDP today is significantly greater in part because of a better corporate tax system.

Here’s the chart from the CPS study, showing the results over the past three decades. 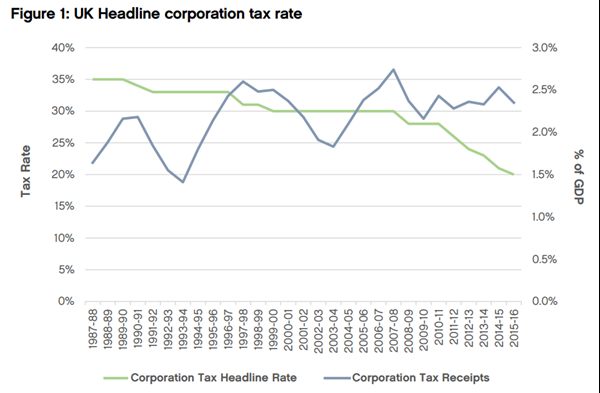 The results from the most-recent round of corporate rate cuts are especially strong.

None of this should be a surprise.

Big reductions in the Irish corporate tax rate also led to an uptick in corporate receipts as a share of economic output. And remember that the economy has boomed, so the Irish government is collecting a bigger slice of a much bigger pie. 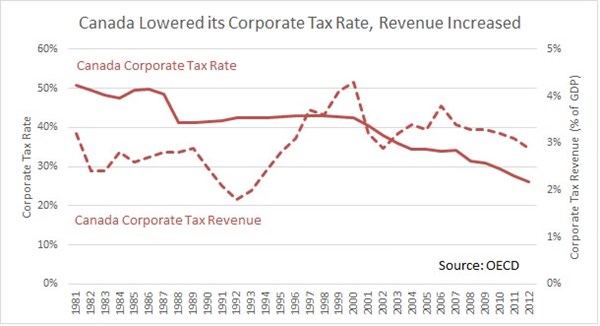 And Canadian corporate tax cuts generated the same effect, with no drop in revenues even though (or perhaps because) the federal tax rate on business has plummeted to 15 percent.

Would we get similar results in the United States?

I’d be satisfied (temporarily) if we split the difference between those two estimates and cut the rate to 20 percent.

Let’s close with some dare-to-hope speculation from Joseph Sternberg of the Wall Street Journal about what might happen in Europe if Trump significantly drops the U.S. corporate tax rate.

Donald Trump says many things that alarm Europeans, but one of the bigger fright lines may have come in last week’s address to Congress: “Right now, American companies are taxed at one of the highest rates anywhere in the world. My economic team is developing historic tax reform that will reduce the tax rate on our companies so they can compete and thrive anywhere and with anyone.” What’s scary here to European ears is…the idea that tax policy is now fair game when it comes to global competitiveness. …One of the biggest political gifts Barack Obama gave European leaders was support for their notion that low tax rates are unfair and that taxpayers who benefit from them are somehow crooked.

Europeans pushed that line among themselves for years, complaining about low Irish corporate rates, for instance. The taboo on tax competition is central to the political economy of Europe’s welfare states… Mr. Obama…backed global efforts against “base erosion and profit shifting,” meaning legal and efficient corporate tax planning.

The goal was to obstruct competition among governments… The question now is how much longer Europe could resist widespread tax reform if Mr. Trump brings in a 20% corporate rate alongside rapid deregulation—or what the consequences will be in terms of social-spending trade-offs to a new round of tax cutting. Dare to dream that Mr. Trump manages to trigger a new debate about competitiveness in Europe."

Amen. I’m a huge fan of tax competition because it pressures politicians to do the right thing even though they would prefer bad policy. And I also like the dig at the OECD’s anti-growth “BEPS” initiative.

P.S. I want government to collect less revenue and spend less money, so the fact that a lower corporate tax rate might boost revenue is not a selling point. Instead, it simply tells us that the rate should be further reduced. Remember, it’s a bad idea to be at the revenue-maximizing point on the Laffer Curve (though that’s better than being on the downward-sloping side of the Curve, which is insanely self-destructive).