The New York Times called Harris a ‘pragmatic moderate.’ But does that label fit with the actual economic policies she has endorsed?

When presumptive Democratic presidential nominee Joe Biden announced this week his choice of Sen. Kamala Harris as his running mate, mainstream media covered her selection with fanfare. For example, the New York Times dubbed the California progressive a “pragmatic moderate,” and both the Associated Press and Los Angeles Times described Harris as “centrist.”

But is this narrative accurate?

Given that Harris may become vice president under Biden, who would be the oldest president ever on Day One of his term, it’s important to look past media spin and accurately assess her policy agenda. With that in mind, here are five economic policies Harris openly supports and would likely push if she became president.

Not content with the record-breaking $3.7 trillion deficit the federal government is currently set to rack up this year, Harris wants to spend $5.5 trillion more over a decade—$500 billion per year—on a new proposal.

Harris’s latest bill would send most Americans monthly $2,000 checks, regardless of COVID-19-related need or circumstance, for the duration of the coronavirus crisis. It’s entirely unclear how this crisis period is defined, and it could easily last for years or become permanent.

This is essentially a “Universal Basic Income” plan that forces taxpayers to finance a minimum income of roughly $24,000 for tens of millions of people. Is it “pragmatic” or “moderate” to put the government in charge of Americans’ livelihoods and incomes? Is it “centrist” to seize trillions of dollars taxpayers in the process?

During the Democratic presidential primary, Harris endorsed “Medicare for All,” which is basically socialized healthcare, and openly backed abolishing all private health insurance. However, she later walked back that proposal in the face of widespread criticism. Yet Harris still wants the federal government to seize control of Americans’ healthcare and transition to a mostly socialist system in short order.

As the Wall Street Journal reports, Harris’s most recent plan would transition the US into a government-run healthcare system over 10 years, with only a minor, highly-regulated role remaining for private health insurance. This means that the massive tax hikes, government control over life-and-death decisions, and stifled innovation that would accompany fully socialized “Medicare for All” would still largely apply under Harris’s vision for American healthcare.

3. Total of At Least $40 Trillion in New Spending

According to Manhattan Institute economist Brian Riedl, Harris’s combined proposals would mean more than $40 trillion in new spending over a decade. To put that figure in context, it is roughly $280,000 in debt accrued per US taxpayer, over 10 years.

The federal government’s broken budget is already piling trillions onto the shoulders of future generations and setting the stage for a future fiscal crisis. Harris basically wants to drop a match on the powder keg that is our public finance.

In today's Washington Post, I estimate that Kamala Harris' recession plan to give most Americans $2K/month for an entire year would cost at least $5.5 trillion -- on top of her $40 trillion spending plan. https://t.co/X1R57hGDDK pic.twitter.com/KR6SLeq1su

“Harris is many things, but please do not use ‘moderate’ or ‘pragmatic’ to describe someone whose own campaign proposed approximately $40 trillion in new spending over the decade,” Riedl said.

Harris was an original co-sponsor of the “Green New Deal” resolution in the Senate, a companion to Rep. Alexandria Ocasio-Cortez’s resolution in the House of Representatives. Throughout her presidential campaign, the California Democrat vociferously backed a version of AOC’s far-left climate plan. Harris has thus signaled her support for a radical “green” platform that would cost up to $600,000 per U.S. household. As Jarrett Stepman wrote for the Daily Signal, among the Green New Deal’s radical goals are:

...meeting ‘100 percent of national power’ demand through renewable sources, retrofitting ‘every residential and industrial building for state-of-the-art energy efficiency, comfort, and safety,’ and eliminating ‘greenhouse gas emissions from the manufacturing, agricultural, and other industries.’

It also includes a grab bag of other left-wing goodies to ‘mitigate deeply entrenched racial, regional, and gender-based inequalities in income and wealth (including, without limitation, ensuring that federal and other investment will be equitably distributed to historically impoverished, low-income, deindustrialized, or other marginalized communities in such a way that builds wealth and ownership at the community level.)’

Among the liberal wish list items included, the Green New Deal contains a proposal for universal health care and a basic minimum income program to make up for all the jobs lost in the process of transitioning to a fully green economy.

But the flawed economics of rent control are clear. Price caps backfire in the long run by limiting the supply of housing, benefitting the few who snag artificially-cheap housing but ultimately leading to higher prices and worsening the area’s housing crisis.

Surveys of top economists routinely show near-consensus on this issue. For example, an IGM Economic Experts Panel survey of top economists found that weighted for confidence, only 1% of respondents agreed that rent control works. A whopping 95% disagreed, with 4% uncertain. 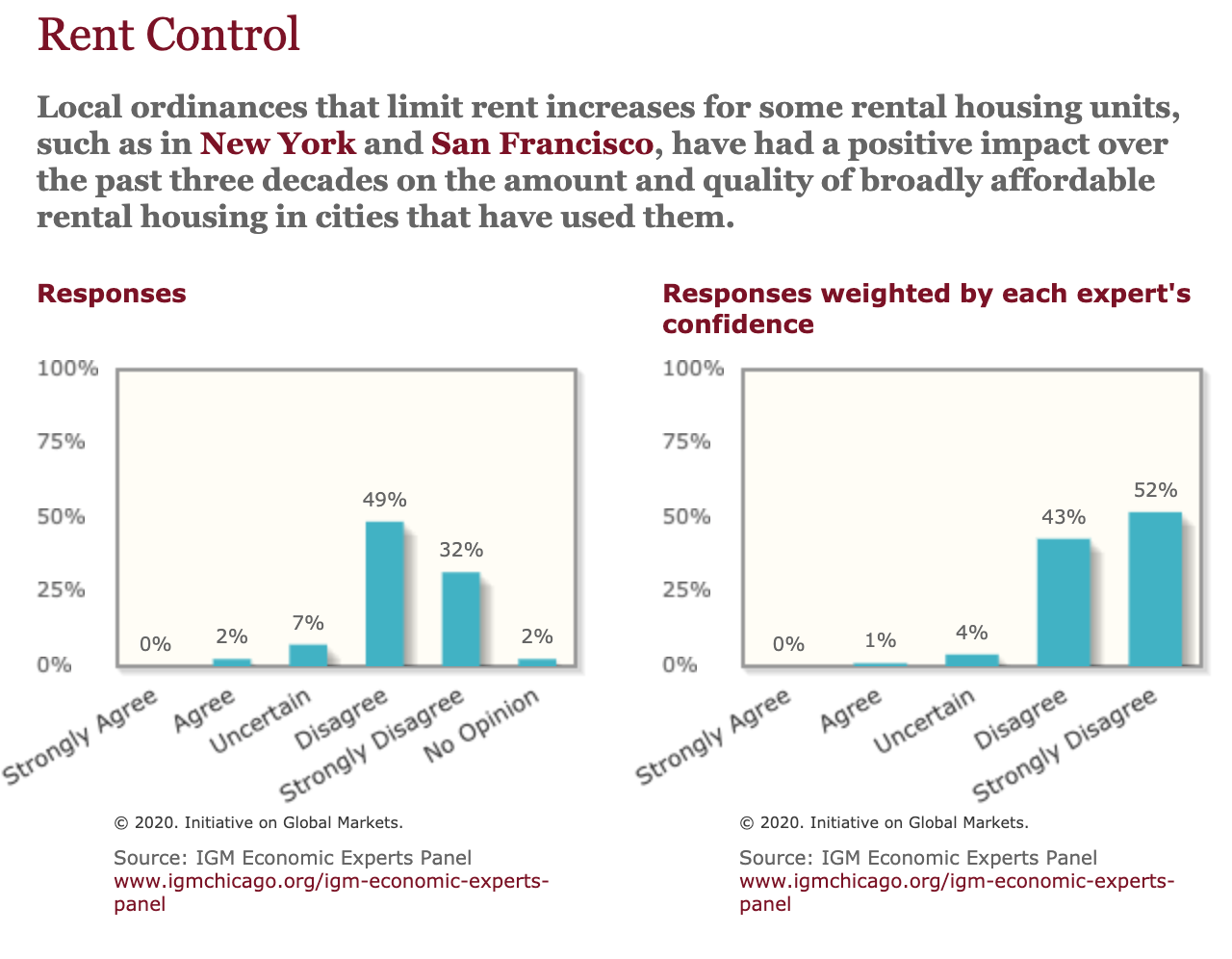 Even the liberal Brookings Institution concluded that “rent control appears to help current tenants in the short run, [but] in the long run it decreases affordability, fuels gentrification, and creates negative spillovers on the surrounding neighborhood.”

Yet Harris has ignored this evidence time and time again, even after rent control conclusively failed in San Francisco, her home city. If ever allowed to impose her misguided socialist price controls on federal housing policy, Harris would spread the housing crisis plaguing cities with these rules to the entire country.

So Is Harris a ‘Moderate?’

The takeaway here is clear: Harris’s economic policies are far to the left, and not centrist or moderate by any stretch.

In fact, objective analysis of Harris’s Senate record reveals that she is one of the most left-wing politicians in America. According to the watchdog website GovTrack.us, Harris ties for furthest-left of all senators, alongside self-avowed socialist Sen. Bernie Sanders. The group also reports she is the least bipartisan member of the Senate.

Meanwhile, the left-wing organization Progressive Punch deems Harris the 4th most left-wing of all senators. It concludes that her voting record is more liberal than even that of Sen. Elizabeth Warren.

But after acknowledging this fact, we’re left with another question. Obviously this far-left policy agenda is unsustainable and unrealistic—so why would an intelligent and well-educated senator like Harris endorse it?

Why Has Harris Embraced The Far Left?

Simply put, public choice economics explains that candidates for government offices are predisposed to support whatever big government programs might sound good to voters and get them elected, regardless of the long-term consequences for their constituents.

“Politicians are not forced to pay attention to future consequences that lie beyond the next election,” famed free-market economist Thomas Sowell wrote in Basic Economics. “An elected official whose policies keep the public happy up through election day stands a good chance of being voted another term in office, even if those policies will have ruinous consequences in later years.”

The senator surely knows we can’t spend $40 trillion without a fiscal crisis, and she has seen policies like rent control fail miserably in her own hometown. Yet as an ambitious politician, Harris’s concern is first and foremost getting elected. And in 2020, succeeding as a Democratic politician, especially in California, increasingly demands an embrace of the socialist agenda—even when empirical data, basic economics, and logical arguments aren’t on your side.

As Sowell wisely concluded, “Politics allows people to vote for the impossible.” Kamala Harris is hoping that come November, Americans will do exactly that.