It now takes 85 percent fewer man-hours to produce a ton of steel than it did in 1980.

From an AP news report:

Some mini-mills need just 0.5 man-hours to produce a ton of steel, Innace says. Increased productivity means today’s steel mills don’t need as many workers. Steel industry employment peaked at 650,000 in 1953. By the start of this year, U.S. steelmakers employed just 143,000. 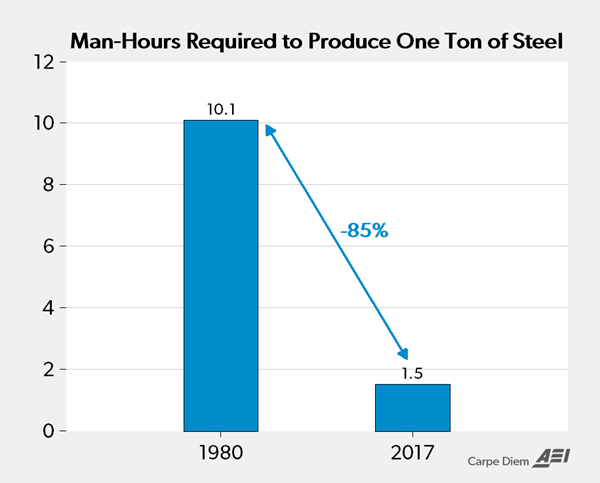 Someone should tell Trump about Voestalpine AG’s steel plant in Austria, which reveals the reality of steel production and jobs. A Bloomberg News story from June 20, 2017, offered a fascinating look at how a modern plant can now produce high-quality steel with few workers. The plant in Donawitz, a two-hour drive from Vienna, needs all of 14 employees to make 500,000 tons of steel wire a year. The same mill in the 1960s would have needed as many as 1,000 workers to produce a similar amount albeit of lesser quality.

“We have to forget steel as a core employer,” Voestalpine CEO Wolfgang Eder told Bloomberg. “In the long run we will lose most of the classic blue-collar workers, people doing the hot and dirty jobs in coking plants or around the blast furnaces. This will all be automated.” Voestalpine long ago concluded it couldn’t compete with the low-cost blast furnaces of the Chinese and others. So it has invested in technology to reduce costs while competing to make high-quality niche products. The so-called U.S. mini-mills have done something similar to stay competitive. Tariffs will let those mills raise prices and profits, but they won’t add much more than a token number of new jobs.

The policy point is that Mr. Trump’s tariffs are trying to revive a world of steel production that no longer exists. He is taxing steel-consuming industries that employ 6.5 million and have the potential to grow more jobs to help a declining industry that employs only 140,000.