Illinois Politicians Are Doubling Down on Failure

In the face of a fleeing population, politicians in Illinois are doubling down on the policies that are driving people away in the first place.

When I did a poll earlier this year, asking which state would be the first to suffer a fiscal crisis, I wasn’t terribly surprised that Illinois wound up in first place.

But I was surprised by the margin. Even though there’s a good case to be made for basket-case jurisdictions such as New Jersey, California, and Connecticut, Illinois not only got a plurality of votes, it received an absolute majority.

Based on what’s happening in the Land of Lincoln, it appears that state politicians want to receive a supermajority of votes. There’s pressure for ever-higher taxes to finance an ever-more-bloated bureaucracy.

And taxpayers are voting with their feet.

The Wall Street Journal editorialized about the consequences of the state’s self-destructive fiscal policy.

Democrats in Illinois ought to be especially chastened by new IRS data showing an acceleration of out-migration. The Prairie State lost a record $4.75 billion in adjusted gross income to other states in the 2015 tax year, according to recently IRS data released. That’s up from $3.4 billion in the prior year. …Florida with zero income tax was the top destination for Illinois expatriates… What’s the matter with Illinois? Too much for us to distill in one editorial, but suffice to say that exorbitant property and business taxes have retarded economic growth. …Taxes may increase as Democrats scrounge for cash to pay for pensions. …Illinois’s unfunded pension liabilities equalled 22.8% of residents’ personal income last year, compared to a median of 3.1% across all states and 1% in Florida. …Illinois’s economy has been stagnant, growing a meager 0.9% on an inflation-adjusted annual basis since 2012—the slowest in the Great Lakes and half as fast as the U.S. overall. This year nearly 100,000 individuals have left the Illinois labor force.

Here’s a chart showing a very depressing decline in the state’s labor force. 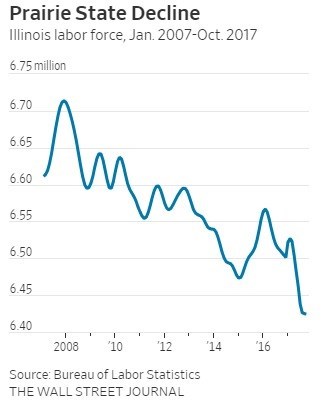 By the way, I wonder whether the chart would look even worse if government bureaucrats weren’t included.

The Chicago Tribune has a grim editorial about what’s happening.

From millennials to retirees, …Illinois is losing its promise as a land of opportunity. Government debt and dysfunction contribute to a weak housing market and a stagnant jobs climate. State and local governments face enormous pension and other obligations. Taxes have risen sharply; many Illinois politicians say they must rise more. People are fleeing. Last year’s net loss: 33,703.

In an editorial for the Chicago Tribune, Kristen McQueary correctly worries about the trend.

It’s one thing to harbor natural skepticism toward government. It’s quite another to take the dramatic step of moving your family, your home, your livelihood to another state to escape it. But it’s happening. The naysayers and deniers blame the weather. They eye-roll the U-Haul rebellion. They downplay the dysfunction. Good riddance to those stingy taxpayers, they trumpet. But that is a shallow, ignorant and elitist viewpoint that dismisses the thoughtful and wrenching decisions thousands of once-devoted Illinoisans have made. For four years in a row, Illinois has lost population in alarming numbers. In 2017, Illinois lost a net 33,703 residents, the largest numerical population decline of any state. That’s the size of St. Charles or Woodridge or Galesburg. Wiped off the map. In one year. …Policy choices have consequences. …People are fleeing Illinois. And still, Democratic leaders in Chicago and Cook County, and their supporters, generally deny that high taxes, underfunded pensions, government debt and political dysfunction are the reasons for the exodus — or that it’s acute.

Newspapers in other states have noticed, as evinced by this editorial from the Las Vegas Review-Journal.

When the progressive political class preaches equality and prosperity, but bleeds productive citizens dry by treating them as little more than human ATMs, there should be little surprise when those same citizens take themselves (and their green) to greener pastures. Perhaps no state in the nation is seeing a bigger such exodus than Illinois. …On the flip side, all of the states surrounding Illinois saw their populations increase… Illinois is experiencing a self-inflicted storm of fiscal distress. …While state income taxes in Illinois don’t reach the level imposed in states such as New York and California, that’s not for a lack of trying. The state raised its rate by 32 percent over the summer, and Democrats want to even more progressive tax rates to pay for all the goodies they’ve promised to Big Labor in order to grease their re-elections. …Illinois is a financial basket case—which is what you get when you combine political patronage with powerful public-sector unions that control leftist politicians. The state should be a case study for other jurisdictions on how not to conduct public policy. After all, who will pay the bills when the taxpayers flee?

Steve Chapman, in a column for Reason, expects more bad news for Illinois because of pressure for higher taxes.

With the biggest public pension obligations, the slowest personal income growth, and the biggest population loss of any state, it has consistently recorded achievements that are envied by none but educational to all. The state is in the midst of a debilitating fiscal and economic crisis. …Illinois has endured two income tax increases in the past seven years. In 2011, the flat rate on individual income jumped from 3 percent to 5 percent. In 2015, under the original terms, it fell to 3.75 percent—a “cut” that left the rate 25 percent above what it was in 2010. Then last year, over Gov. Bruce Rauner’s veto, the legislature raised the rate to 4.95 percent. None of these changes has ended the state’s economic drought, and it’s reasonable to assume they actually made it drier. …well-paid people can’t generally leave the country to find lower tax rates. They can leave one state for another, and they do. …A 2016 poll by the Paul Simon Public Policy Institute at Southern Illinois University found that nearly half of residents would like to leave the state—and that “taxes are the single biggest reason people want to leave.”

The Wall Street Journal opined on the state’s slow-motion suicide.

The only…restraint…on public union governance in Illinois…the state’s flat income tax. …Democrats in Springfield have filed three constitutional amendments to establish a graduated income tax… Democrats are looking for more revenue to finance ballooning pension costs, which consume about a quarter of state spending. …Connecticut and New Jersey provide cautionary examples. Democrats in both states have soaked their rich time and again, and the predictable result is that both states have fewer rich to soak. Economic growth slowed and revenues faltered. This vicious cycle is already playing out in Illinois amid increasing property, income and business taxes. Over the last four years, Illinois GDP has risen a mere 0.9% per year, half the national average and the slowest in the Great Lakes region. Between 2012 and 2016, Illinois lost $18.35 billion in adjusted gross income to other states. …Democrats claim a progressive income tax will spare the middle-class, but sooner or later they’ll be the targets too because there won’t be enough rich to finance the inexorable demands of public unions. …Once voters approve a progressive tax, Democrats can ratchet up rates as their union lords dictate.

While a bloated and over-compensated bureaucracy (especially unfunded promises for lavish retiree benefits) is the top fiscal drain, the state also loves squandering money in other ways.

Here are some excerpts from a piece in the Belleville News-Democrat.

Illinois is the dependency capital of the Midwest. No other state in the region has more of its population dependent on food stamps… So what’s driving the state’s dependency crisis? State bureaucrats using loopholes and gimmicks to keep more people dependent on welfare. According to the Illinois Department of Human Services, nearly 175,000 able-bodied childless adults are on the program. These are adults in their prime working years—between the ages of 18 and 49—with no dependent children and no disabilities keeping them from meaningful employment. …the state has relied upon loopholes and gimmicks to trap more and more able-bodied adults in dependency. Federal law allows states to seek temporary waivers of the work requirement in areas with unemployment rates above 10 percent or with a demonstrated lack of job opportunities in the region. …the Illinois Department of Human Services…used old data and it gerrymandered the request in whatever way was necessary to keep more able-bodied adults on welfare. …State bureaucrats have gamed the system and as a result, thousands of able-bodied adults will remain trapped in dependency, with little hope of better lives.

Let’s close with some excerpts from a very depressing column in the Chicago Tribune by Diana Sroka Rickert.

Keep in mind, incidentally, that all this bad news will almost certainly become worse news thanks to last year’s tax reform. Restricting the state and local tax deduction means a much smaller implicit federal subsidy for high-tax states.

P.S. If you want good news on state tax policy, South Dakota may have the nation’s best system. And North Carolina arguably has taken the biggest step in the right direction. Kentucky, meanwhile, has just switched to a flat tax.