If Creating Jobs Made a Country Great, North Korea Would Epitomize Success

There was also much job creation under slavery.

Other things being equal, less unemployment is better than more. I am of course speaking of involuntary unemployment at the going wage rate. It is preferable to be unemployed if one prefers that and can afford it. It is also better to be employed where one can earn more, other aspects of the work being the same.

If creating jobs made a country great, North Korea would be very great, as one can read between the lines in a story on North Korea in The Economist of last week. The poor North Koreans fear getting sent to a labor camp, where between 80,000 and 120,000 of their fellow citizens are incarcerated. Young men are compelled to spend years in military service, which mostly consists of "hard labor on construction sites." The state is also nice enough to create lots of other, ordinary jobs :

North Koreans are compelled to spend six days a week working for the state for meager wages. ... "My job is just a dull waste of time," says one woman in her 20s who works for a state-run firm. Asked about quitting, she demurs: "It's not easy."

One good and simple way for the state to create jobs is to maintain a labor-intensive economy:

It is true that foreign sanctions, which limit trade between North Korea and the rest of the world, help create these jobs and make North Korea great. But an authoritarian state would be quite successful at generating poverty by itself.

There was also much job creation under slavery. No valid slave was unemployed. If people belong to you, you put them to work. If a machine has an opportunity cost, you don't keep it idle or else you sell it.

Labor in the United States Is Voluntary

The labor situation in today's United States greatly differs from North Korea's. According to the latest (June 1, 2018) monthly employment report by the Bureau of Labor Statistics (BLS), 155 million Americans were voluntarily employed in May. Six million were involuntarily unemployed (according to the official definition, they were not employed and they had actively looked for a job during the preceding four weeks), which gives a 3.8 percent rate of unemployment. Much of this was frictional unemployment (in between two jobs) or the result of poor skills and such constraints as minimum wages. For individuals 25 years old and over with at least a bachelor's degree, the unemployment rate is 2 percent. To illustrate the importance of frictional unemployment, one only has to realize that every month, on average, some 5 million Americans change jobs, as can be checked with BLS data. 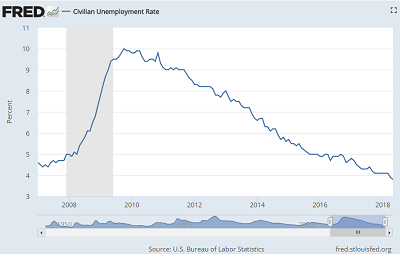 This happy situation, however, makes a standard trade-off even clearer. If more guns or washing machines are produced, the production of butter or cars must diminish. Which brings us to protectionism.

Any new goods produced as a substitution for imports will divert jobs away from producing something else that would otherwise have been produced. Jobs will be diverted from producing higher-valued goods to producing lower-valued ones. More precisely, resources will be wasted in producing domestically what could have been purchased abroad at a lower cost. The cost of the increased domestic production will be higher, in terms of goods foregone, than the value consumers assign to it.

In truth, you do not make a country great by deciding what its residents will produce and from whom they will buy what.

Note that even when an economy is not at full employment, the structural or cyclical reasons why this is so often continue to apply if the production configuration changes. In this case, it remains true that producing more of something means producing less of something else, at least over time.

It would be vastly exaggerated to say that this sort of import-substitution strategy is the same as the North Korean government's industrial strategy, but it is inspired by the same kind of muddled economics. In truth, you do not make a country great by deciding what its residents will produce and from whom they will buy what, that is, by creating jobs that produce less valuable goods. Jobs are a means to consumption. Public policy that emphasizes the means to the detriment of the goal is detrimental, in America as in North Korea.