I Test-Drove the Future

And the ride was oh-so smooth.

I just bought a new car, so why would I be test-driving another so soon?

The short answer is: I’m a gadget nut, and the Tesla Model S is the ultimate gadget.

There once was a very dark time when no one had such a thing as a car.

In that world, which lasted a very, very long time, people had to rely on their feet or, if they were lucky, pollution-spreading horses to transit any sort of distance on land. I say “had to rely” because their was, quite literally, no other option.

Of course, I never lived during those times, so it would be easy for me to take for granted the fact that I, by myself, can literally traverse hundreds of miles in a day. (Roads are another enabling factor, but I’ll leave them alone for their unexpectedly controversial nature.)

Following the locomotive’s relatively short run as the alternative to horses, Henry Ford transformed a useless byproduct of kerosene lamps—which, in turn, were fueled by a naturally-occurring substance that had been sleeping in the ground for millennia—into a new fuel for human ambition.

In 1908, Ford built on the largely unapplied inventions of Nikolaus August Otto, Gottlieb Daimler, and others to launch the first truly accessible gasoline-powered automobile: the Model T.

The car improved everything about being human. Sitting behind the wheel, we could go nearly anywhere at low costs of time, money, and even thought. Gone were the days of matching train schedules to personal schedules, and sitting next to a talkative fellow passenger when all you wanted was to be alone.

The Tesla is an internet gadget on wheels, filled with high-technology and comfort beyond anything I’ve seen before in a car.

The car let us stretch far beyond our places of birth to begin new lives where no one knew our names, our parents, or our backgrounds. The car freed us from local prejudices, including those we unwittingly assigned to ourselves.

As we grew accustomed to our cars and the freedoms they afforded, life continued to be less than absolutely perfect. We started becoming anxious about all of our time on the road, the environmental and health impacts, and the fact that Bluetooth would sometimes cause our mobile telephone calls to fail.

Because cars carried a cost, we started demanding that something be done to fix them  or even make them less accessible to the vast majority of people.

But innovation does not happen by actions taken at the ballot box or in the legislature. We cannot simply wish solutions into being. Innovation takes just the right mix of inspiration and resources to stumble upon the next thing that will change the world.

Enter Elon Musk and his vision to finally, after all these smoggy decades and record temperatures, turn dinky electric golf carts into real-life cars. I can confirm he has achieved just that.

Beginning when the door handles smoothly emerged from the flat door surface, my experience test-driving the Tesla was filled with jaw-dropping moments. The Model S 100D I drove has a range of 335 miles per charge.

Given government subsidies and other handouts provided to Tesla, I’ve already contributed to the adoption of this new form of ride.

The Tesla is an internet gadget on wheels, filled with high-technology and comfort beyond anything I’ve seen before in a car. Of course, I checked to see how FEE.org rendered in its built-in web browser shortly before reaching for the non-existent gear-shift. (Our wonderful Tesla guide Khadijah described that common action as the “phantom touch,” as if the gear-shift had become a part of our very own bodies.)

Before we left the Tesla lot, Khadijah told us that the autopilot feature doesn’t work quite yet on this model, but it will be slowly rolled out over the next few weeks via wireless software updates. This means you go to bed one night, and the next morning your car can magically drive itself. What next?

I have absolutely no plans to buy a Tesla. I merely needed to witness the future. Ok, truthfully, I really wanted to feel how quickly the Tesla Model S accelerated. (It pushes you into your seat similarly, I suppose, to the first nanosecond of a rocket launch.)

The wealthy people paying today as much for this car as many do for a house are making it possible for me to afford the next, next generation of personal transportation. Of course, given government subsidies and other handouts provided to Tesla, I’ve already contributed to the adoption of this new form of ride. I would prefer it be otherwise, but, damn, it feels good to sit in this driver’s seat. 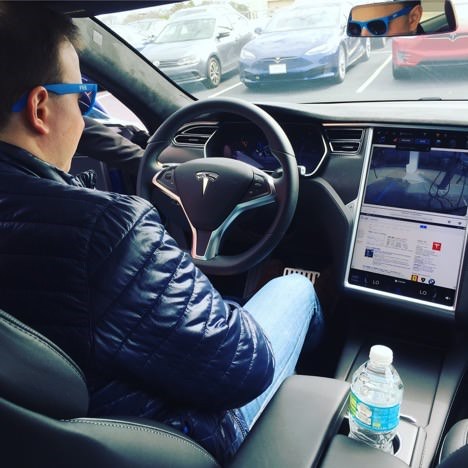 Me, familiarizing myself with the future. 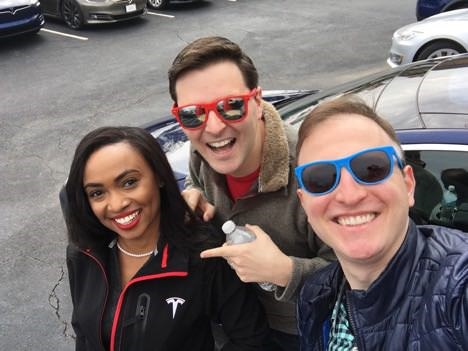 Pictured with our Tesla guide, Khadijah, following our test drive.