I Just Bought a ThinkPad from a Company in China. The UPS Tracking Reveals the Miracle of Trade.

Despite the interference of two customs bureaus, not to mention the mountains of regulations in each place, trade had worked its magic.

What an extraordinary episode in the economic progress of man that age was which came to an end in August, 1914! ... The inhabitant of London could order by telephone, sipping his morning tea in bed, the various products of the whole earth, in such quantity as he might see fit, and reasonably expect their early delivery upon his doorstep; he could at the same moment and by the same means adventure his wealth in the natural resources and new enterprises of any quarter of the world, and share, without exertion or even trouble, in their prospective fruits and advantages; or he could decide to couple the security of his fortunes with the good faith of the townspeople of any substantial municipality in any continent that fancy or information might recommend. He could secure forthwith, if he wished it, cheap and comfortable means of transit to any country or climate without passport or other formality.

From the vantage point of the 21st century, Keynes had a detrimental influence on the evolution of economics and liberty. A charitable view would be that he was a dilettante captured by the statist intelligentsia of his time (a libertarian cultural environment was as rare then as it is now), and naïve about Leviathan.

Commenting on Friedrich Hayek's 1944 book The Road to Serfdom, Keynes said of government intervention that "dangerous acts can be done safely in a community which thinks and feels rightly, which would be the way to hell if they were executed by those who think and feel wrongly" (quoted by the late Ralph Raico in "Was Keynes a Liberal?"). Keynes was sure that those who thought and felt rightly were on his side and that he would be advising their government. But he had, at least in 1919, the right sentiment about freedom of movement and the aesthetics of trade.

The Beauty of Trade

I was reminded of the beauty of trade after I ordered a ThinkPad laptop from Lenovo, a Chinese company that bought the ThinkPad line from IBM in 2005. Dell also makes good high-end laptops, but they did not have exactly what I wanted (I am actually writing this post on an older Dell machine). I don't like the fact that the Chinese Academy of Sciences, a government creature, owns about 10 percent of Lenovo. I feel for the poor Chinese taxpayer who was milked to invest in Lenovo and who indirectly subsidized my ThinkPad. But the company's shares are also listed in Hong Kong; it is a market-driven and market-constrained organization, and if they make the computer I want, I will buy it.

The customized ThinkPad I had ordered online on April 26 was manufactured in China and, as can be seen on the screen picture of UPS tracking, was tendered to the shipping company on May 4. Follow the peregrination of the small package. 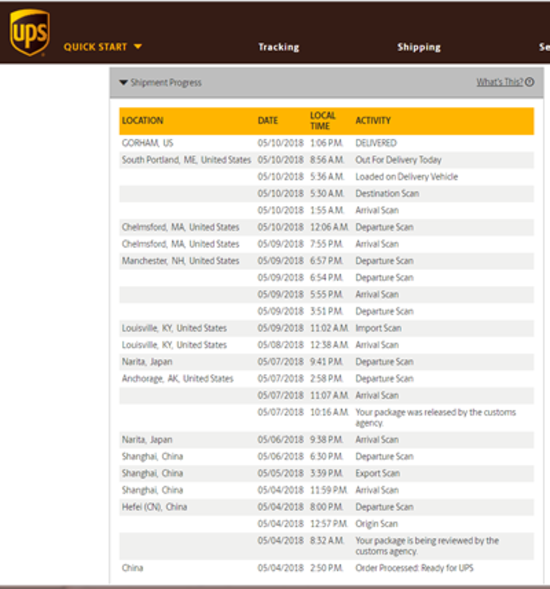 From Heifei in China, it traveled over the weekend to Shanghai, then Japan, and landed in Anchorage, Alaska, on Monday morning May 7. As the plane was somewhere in the skies between Japan and Alaska, the price of the order was debited from my credit card.

Very early the next day, the package was scanned in Louisville, Kentucky, the largest UPS air facility. The Louisville hub processes 1.6 million packages a day on 155 miles of conveyors and in 546 camera tunnels. The typical day sees 130 airplanes land or take-off. My laptop spent more than 36 hours in this labyrinth. Talk about a Travelling Salesman problem!

UPS then flew my package to Manchester, New Hampshire, after which it made a little detour to Chelmsford, Massachusetts. From there, it was sent to South Portland, Maine, probably by truck. A few hours later, in the early morning, it was "loaded on delivery vehicle," and the UPS truck appeared in my driveway six hours later. The last 30 miles took nearly as much time as from Japan to Alaska.

The Modern Economy Is Built on Trade

Despite the interference of two customs bureaus, one in China and one in the United States, not to mention the mountains of regulations in each place, trade had worked its magic. As impressive as the conception and manufacturing of a laptop computer are, so is trade along the way through countless purchases of components and armies of intermediaries.

As Hicks says, "So long as the trade is voluntary, it must confer an All-round Advantage."

In John Hicks's extraordinary book A Theory of Economic History (1969), one sees beautiful trade as an essential part of the modern economy. In the primitive economy based on custom or command, Hicks writes, "[t]here are farmers, and soldiers, and administrators; but there are no traders, no one who is specialized upon trade." There are no middlemen.

The modern economy, on the contrary, is filled with middlemen, from traders of raw materials to stock exchange traders, a multitude of component and service suppliers, shipping companies, and at the end of the long chain, Amazon or Best Buy for the typical computer buyer.

The reason for the beauty of trade lies in its bringing utility to the individuals involved and, in the long run, to most if not all individuals in society. Even monks benefit from trade. At any rate, there is no way to know if a poor person of today would have been happier in a pre-modern economy; he might as well have been a serf. As Hicks says, "So long as the trade is voluntary, it must confer an All-round Advantage." This applies to trade over political borders as much as within them—if not more, for international trade also reduces the power of national leviathans.