Human Progress: The Most Important (and Under-Reported) Fact in Modern History

Things are improving, and they have been for a while.

In his new book Enlightenment Now and in his McLaughlin Lecture at the Cato Institute this week, Steven Pinker made the point that we may fail to appreciate how much progress the world has made because the news is usually about bad and unusual things. For instance, he said, quoting Max Roser, if the media truly reported the important changes in the world, “they could have run the headline NUMBER OF PEOPLE IN EXTREME POVERTY FELL BY 137,000 SINCE YESTERDAY every day for the last twenty-five years.”

This is understandable. As Pinker writes,

News is about things that happen, not things that don’t happen. We never see a journalist saying to the camera, “I’m reporting live from a country where a war has not broken out”—or a city that has not been bombed, or a school that has not been shot up. As long as bad things have not vanished from the face of the earth, there will always be enough incidents to fill the news, especially when billions of smartphones turn most of the world’s population into crime reporters and war correspondents.

And among the things that do happen, the positive and negative ones unfold on different time lines. The news, far from being a “first draft of history,” is closer to play-by-play sports commentary. It focuses on discrete events, generally those that took place since the last edition (in earlier times, the day before; now, seconds before). Bad things can happen quickly, but good things aren’t built in a day, and as they unfold, they will be out of sync with the news cycle. The peace researcher John Galtung pointed out that if a newspaper came out once every fifty years, it would not report half a century of celebrity gossip and political scandals. It would report momentous global changes such as the increase in life expectancy.

I’ve noted this myself. I think the mainstream media such as NPR, which I listen to morning and evening, fail to adequately examine the most important fact in modern history—what Deirdre McCloskey calls the Great Fact, the enormous and continuing increase in human longevity and living standards since the industrial revolution. If you listen to NPR or read the New York Times, you’ll be well informed about the news in general and about problems such as racism, sexism, and environmental disaster. But you won’t often be reminded that we are the richest, most comfortable, best-fed, longest-lived people in history. Or as Indur Goklany put it in a book title, you won’t hear about The Improving State of the World: Why We’re Living Longer, Healthier, More Comfortable Lives on a Cleaner Planet.

Pinker does point out, “Information about human progress, though absent from major news outlets and intellectual forums, is easy enough to find. The data are not entombed in dry reports but are displayed in gorgeous Web sites, particularly Max Roser’s Our World in Data, Marian Tupy’s HumanProgress, and Hans Rosling’s Gapminder.” But of course, those aren’t the major media. Which is why, he says, “And here is a shocker: The world has made spectacular progress in every single measure of human well-being. Here is a second shocker: Almost no one knows about it.”

So what if the media did report the most important news, the Great Fact? I asked Cato intern Thasos Athens to help me envision that: 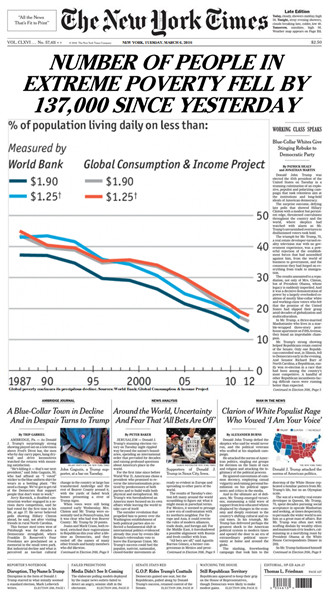