Health care is too complex and changes too quickly for anyone to manage from a central list. 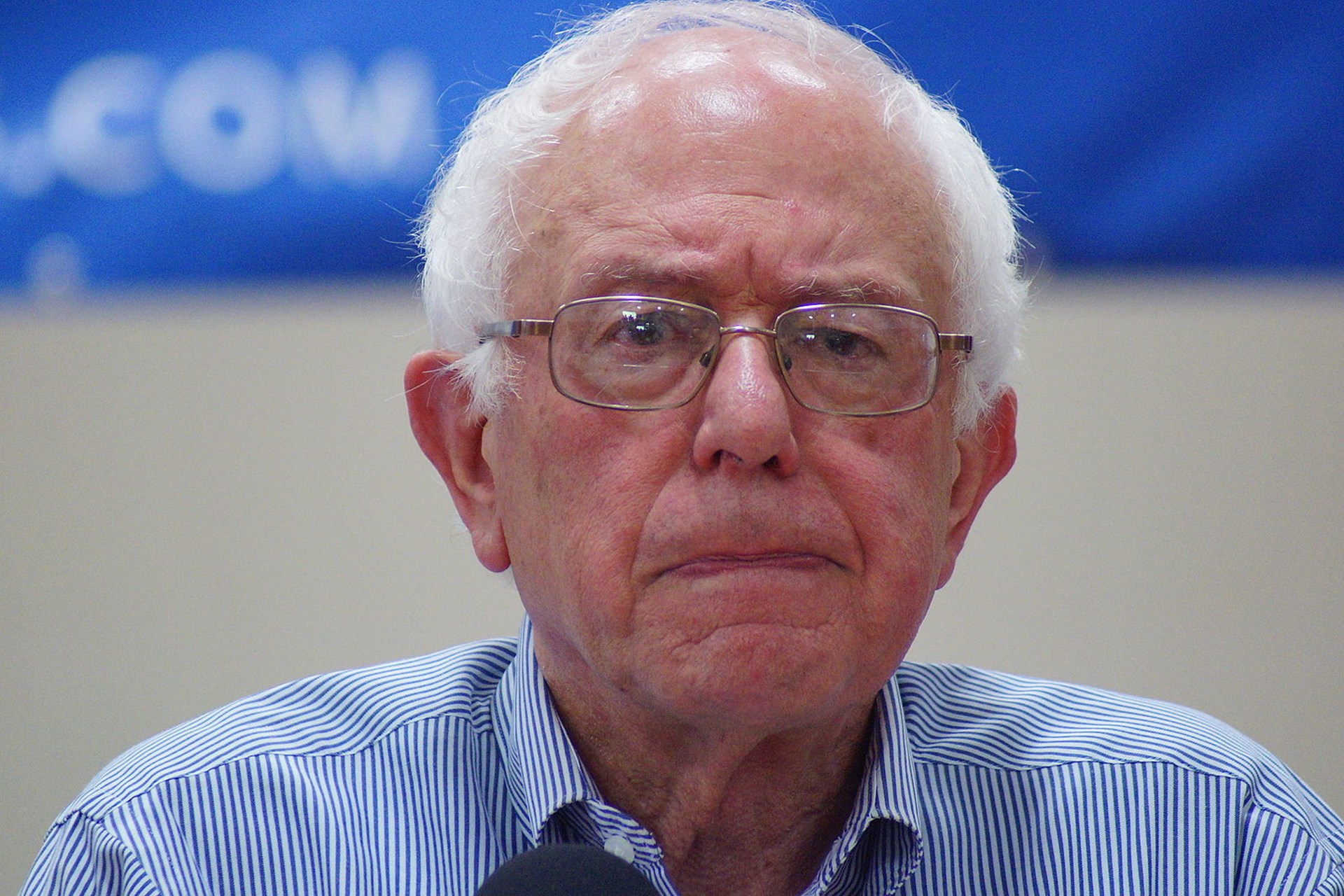 You’ve heard the US spends twice as much on health care as the rest of the developed world. Yet we’re not twice as healthy.

We’re mentally ill for sure because we keep rejecting a “single-payer” system like sensible countries have. Don’t you know, Citizen, that Medicare for All would drive huge efficiencies and slash costs? Yet you and other Americans have resisted it since the Roosevelt administration.

Do we delight in hearing of our uninsured neighbors’ bankruptcies? Do we get an extra thrill from skiing knowing a broken leg would mean financial ruin?

Perhaps some do. But some of us dispute the savings claims.

Bernie Sanders promises Medicare for All would be about 20 percent cheaper. Others claim 60 percent. And they have a list of costs to trim, starting with reclaiming insurers’ outrageous profits.

Unfortunately, outrage buys fewer tongue depressors than one might hope. The top health insurers averaged 4.1 percent profit in 2017 (per Yahoo Finance). That’s taken on half (at most) of spending for-profit insurers handle. Eliminating those profits would save about 2 percent. Since health care gets 4.5 percent more expensive every year, that would in effect roll prices back to last August.

Then there are prescription drugs. Bernie Sanders assures us “the government will finally have the ability to stand up to drug companies and negotiate fair prices.” Perhaps he imagines Medicare boss Seema Verma holding America’s seniors hostage for a better deal from Pfizer.

The industry is riddled with waste, just not in pockets big enough to spot from Capitol Hill and fix with laws. It must be found with a magnifying glass and extracted with tweezers.

Is single payer up to the job? Can it root out waste and drive improvements in health care’s nooks and crannies and keep doing so as the world evolves? Let’s turn to its track record.

Question 1: In what country is single-payer making health care cheaper from one year to the next?

America spends $10,000 per person on health care. If single payer saved 20 percent, someday we’d be spending $8,000. In other words, the growth rate would go negative for a while. 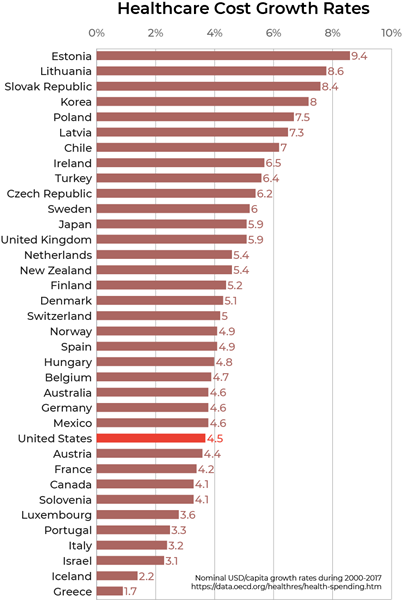 Please point to a country where single-payer is driving costs down, Senator.

All other single-payer systems are struggling with runaway costs. Would our bar in the chart be the only one pointing left? It would seem optimistic. Based on this data, we should expect our costs to grow even faster than they do now.

The UK saw costs rise when it launched the National Health Service (NHS) in 1948. Health Minister Aneurin Bevan bought doctors off (“stuffed their mouths with gold”) to win support for it. Pent-up demand put it over budget immediately. In the first year, it spent 32 times what it had planned for eyeglasses. It had to raise salaries to attract more nurses. Prime Minister Clement Attlee pleaded over the radio with citizens not to overburden the system.

Over the subsequent 68 years, costs have grown an average 4 percent per year.

Between 1947 and 1951, prescription volume nearly tripled, and a single-payer system was proving unsustainable. The health minister’s career came to an early end, and the NHS introduced prescription charges, achieving a slight lull in costs. Over the subsequent 68 years, costs have grown an average 4 percent per year.

The UK does not justify hopes of even a one-time cost drop. Socialists, can you point to a country that does?

Question 3: What other function has government taken over and made cheaper over time?

Not education. Not defense. Not police and fire protection. Any other nominations?

Question 4: How often have politicians voted to put millions of Americans out of jobs?

Even if health care waste were easy to spot and fix, single payer still wouldn’t do so.

The single-digit profits mentioned above are typical. Less than a dime of every health care dollar gets distributed to someone as profit. The great majority goes into someone’s paycheck—maybe a nurse, maybe an advertising copywriter, maybe an IT guy at the FDA. Health care is 18 percent of the US economy, which means 30 million of the country’s 165 million jobs.

Any health care reform that has us put fewer dollars in means fewer dollars out to all those people. For costs to halve, 14 million people need to lose their jobs.

Any health care reform that has us put fewer dollars in means fewer dollars out to all those people. For costs to halve, 14 million people need to lose their jobs. Or 27 million need to take a 50 percent pay cut. Or there needs to be some combination of the two, all without comparable drops in quality and while handling higher demand.

Please name a politician willing to put 14 million Americans out of work.

Of course not. Washington can’t even push Big Bird—who doesn’t vote—out of the nest. That’s why Medicare’s costs are out of control. That’s why Obamacare gave insurers a more central role rather than pushing them to the periphery. If there were big, easy ways to make health care cheaper, politicians would run screaming from them.

It's Not Funny Anymore

Sanders is right that American health care needs a serious shake-up. He’s right that big insurers are a problem.

But his proposed solution—to replace them with one giant monopoly insurer, run to please politicians rather than customers—is nakedly irrational. Every such system out there is struggling as hard as we are to control costs. Both our system and theirs have somehow leveraged technology—which is making everything else on the planet cheaper and more accessible—to drive up their costs. Eighty years of Washington’s fixes have turned health care into a bureaucratic maze of gatekeepers and high tolls.

Yet instead of being discouraged, the social engineers are even more violently bent upon prosecuting their schemes, driven equally on by hope and despair. This time, they insist, it will be different. This next government fix will turn it around. Our results will be better than all those other single-payer countries. This time politicians will defy their incentives and cut costs. Think of single payer’s potential, won’t you?

Let’s all agree the potential gleams as bright as ever.  Then let’s acknowledge that 80 years of experiments have spawned a wretched hive of middlemen, second-guessers, gatekeepers, bureaucratic baggage handlers—individually charming people, no doubt, but collectively a burdensome rabble the middle class can’t afford to support.  The truth is they need to be downsized and streamlined, a fiendishly complex and at times painful job Washington likely is not up to.

We know who can.  A group large enough and motivated enough to spurn the middlemen, inflict the needed job losses, and demand value for money: consumers. Free markets are not just the best way to impose cost efficiencies on complex supply chains, they’re the only approach that has ever worked.

Health care is literally a matter of life and death.  It’s not okay for politicians to run medical experiments on us unwilling patients for decades.  Nor for citizens to stand patiently by as they launch the next set on millions of vulnerable people.