How the Left's Racial Politics Backfired

The Left Wanted Racial Politics and That's Exactly What They Got

Get out the Doritos. Pop the top on your Bud Light. Go down to your man cave, plop down on your La-Z-Boy, invite your friends over and turn on the Packers game.

Normally, white people just don't think much about race. But they are now surrounded by a culture obsessed with both race and gender.

CNN commentator Van Jones, clearly upset by the results coming in last night, claimed that Democrats got “White-lashed.” In a way, he was right. But he has only himself to blame.

The problem with liberals is that they want all the advantages of racial politics and none of the detriments. They have succeeded in weaponizing entire racial groups, but when they find that they have inadvertently weaponized the ones who vote the other way, they get upset.

Nate Cohn at the New York Times said something interesting about Trump's win to which everyone should pay careful attention. He said that “white working class voters just decided to vote like a minority group. They're [over] 40% of the electorate.” 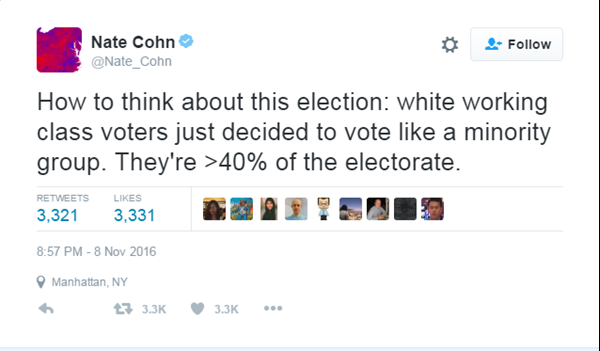 In a sense, I think a large part of Donald Trump's vote consisted of people who felt like saying, “You want racial politics? We’ll give you racial politics!”

These people are not racist. They’ve got too many other issues to deal with that really matter. Under normal circumstances, white people just don't think very much about race. They have always been the default ethnic group, so they've never had to think about race. But they are now surrounded by a culture obsessed with both race and gender. And they are regularly lectured by the liberal elites who just got spanked at the polls that they should think about it all the time.

Black Lives Matter, but your little White honky life is politically meaningless. Go help your children finish their Black History Month coloring assignment from school and shut up. And don't even think about touching that Peach crayon. If your finger even touches anything lighter than Burnt Sienna we'll cut it off.

This is what many Whites think they hear. They may be wrong or right, but that is beside the point. And when other things in their lives make them feel undervalued—the loss of their manufacturing job, the collapse of their marriage, the effect of drugs on their family, the bad schools their kids have to go to—when this is the reality of their lives, then watching television and hearing about how everyone except you deserves more attention and assistance becomes just a little hard to bear.

And when you are forced toward sentiments you don’t really think you should have by a self-righteous cultural establishment that is always telling you how you should feel, you tend to get a little cranky, and when you get cranky you end up as the beer frame at the bowling alley. And you take it out on someone who represents this establishment at the polls.

The problem is that when Whites are forced to think about race, they are also forced to act like a minority.

So Hillary did serve some purpose.

Just look at where Trump was the strongest: in the Appalachias and the rust belt. There’s a reason J. D. Vance, author of Hillbilly Elegy, is the man of the hour. It is he who has presented the liberal Democrats with their causa mortis. He’s the one who, by mere reflection on the plight of the White middle and underclass—and its underappreciation—did more to predict what happened yesterday than all the sophisters and calculators manipulating the polling data.

Race did play a role in Trump's win, but not in the way that the liberal media thought. Through their control of what Richard Weaver called the “great stereopticon”—the media construct by which we are all propagandized—we are told that we should think about race and gender everywhere all the time. The problem is that when Whites are forced to think about race, they are also forced to act like a minority—as Cohn points out, a very large one. The problem here is that the result is almost exactly the opposite of what the purveyors of racial politics intended.

Quite frankly, it serves them right.

And when you add gender into the mix, it becomes nitro to the racial glycerin. Liberal Democrats victimized themselves on election night. They need to think harder about whether they really want the kind of culture they have been trying to create: one divided along lines of race and gender.

What they found out on election night is that it doesn't always work to their advantage.