How the Harlem Globetrotters Won Hearts and Minds through the Market

The Globetrotters played a huge role in professional basketball's desegregation. 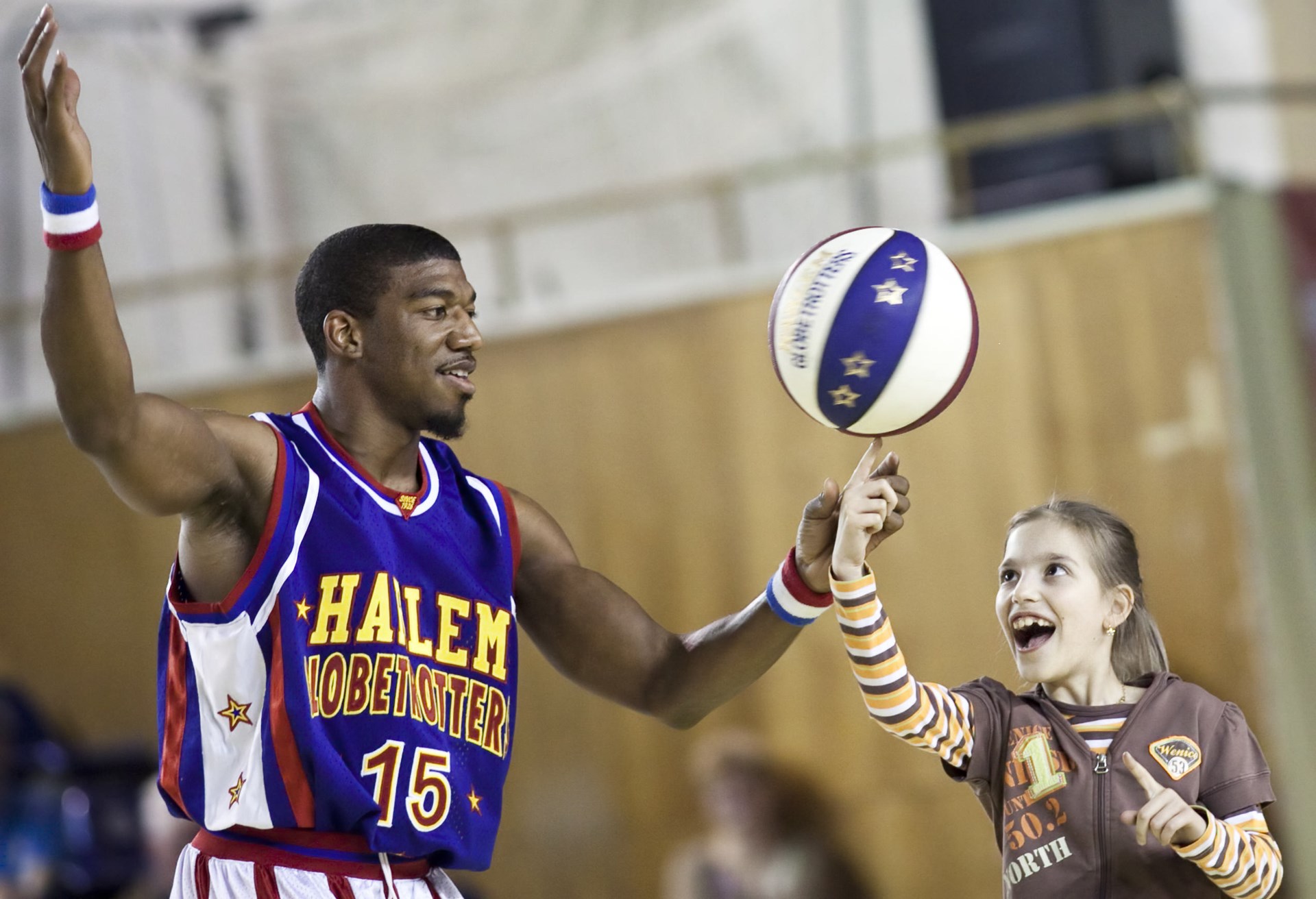 The Harlem Globetrotters did not wait for the benevolence of others to play basketball. Starting in 1927, the team composed of all-black players donning red-white-and-blue uniforms toured the United States playing anybody willing to play them. Winning hundreds of games per year, the Globetrotters became the barnstorming team of the century and only shifted from competitive play to an entertainment act after professional leagues integrated.

The Struggle with Prejudice and Bigotry

The Globetrotters were a welcome introduction to the game of basketball for most, but the team represented an uncomfortable shift in the culture for white conservatives. White audiences heckled and prodded at the all-black team. The Globetrotters responded with style, professionalism, and a comedic ability to razzle-dazzle. Spectators began to look past their color and, instead, would enjoy the game of basketball.

Saperstein’s attitude towards African-Americans contributed to players’ struggles with racism.

While the Harlem Globetrotters were one of the first organizations to utilize black talent, another independent team, the New York Renaissance (Rens), embraced professional black players first. College basketball outside of the American South had been racially integrated since shortly after basketball’s inception, as well. College teams served as a valuable source of recruits and competition for the Globetrotters during their early years.

The coach and owner of the Globetrotters until his death in 1966 was Abe Saperstein. As a Jewish man who had faced discrimination himself, it is astonishing that Saperstein would pay his black players less than half as much as their white opponents.

Abe nearly had a monopoly on black players because of the lack of opportunities for them to play elsewhere. Saperstein took full advantage and was unresponsive to players’ demands, once firing the entire team for threatening to strike. Saperstein’s attitude towards African-Americans contributed to players’ struggles with racism, but Abe’s actions to profit from the black talent led to the empowerment of black individuals to participate in the market.

From 1939 to 1948, the World Tournament of Professional Basketball took place in Chicago, Illinois. The tournament was comprised of the best teams from the all-white National Basketball League and the best independent teams like the Globetrotters and the Rens. The New York Rens won the first tournament in 1939, and the Globetrotters won in 1940. These victories effectively proved black players could match up with the best white teams, but it would take another decade before professional leagues would integrate.

The Globies were considered one of the best teams during the 1940s, but the “show” the ‘Trotters put on made the team by far the most popular. Additionally, the Globetrotters’ style of dribbling innovated the game of basketball. Prior to the Harlem Globetrotters, the game of basketball was rigid; pass the ball five times, and then take a shot. The Globies embraced a much looser style of play. Globetrotter Marques Haynes could dribble for an entire quarter in the era before a shot clock.

How the Globetrotters Beat the Lakers and Segregation

The Globetrotters were riding a 102-game win streak heading into a showdown on February 19, 1948, with the World Champion Minneapolis Lakers. The Globetrotters versus Lakers game was intended to be a pre-game event for the Chicago Stags versus the New York Knicks. However, the Globetrotters, as always, stole the spotlight and performed for a crowd of over 17,000. The typical Stags game only drew about 5,000 fans.

The following year, the Boston Celtics drafted Chuck Cooper, and the Washington Capitols drafted Earl Lloyd, desegregating the NBA in 1950.

Laker legend George Mikan stood at 6’10’’ and posed a threat unlike any previously faced by the Globetrotters. Trailing at halftime, the Globies decided to double-team the giant Mikan. The plan worked to perfection. With the game tied 59-59, Globetrotter Marques Haynes dribbled for the final two minutes. With seconds remaining, Haynes passed to fellow Globie Ermer Robinson who drained a buzzer-beating shot to win 61-59.

The Globetrotters would beat the Lakers again in 1949. The following year, the Boston Celtics drafted Chuck Cooper, and the Washington Capitols drafted Earl Lloyd, desegregating the National Basketball Association (NBA) in 1950. A former Globie and Ren, Nate “Sweetwater” Clifton, was the first African-American to sign an NBA contract when he became a New York Knick, and Saperstein’s leverage on black talent quickly evaporated.

The Globetrotters acknowledged that racism continued to get in the way of basketball. Hotels and businesses in the South would not accommodate the players. In one instance in Jacksonville, Florida, the ‘Trotters were refused a hotel room, but Judy, a bowling chimpanzee, had the best suite in the hotel with all of the bananas she wanted. The ‘Trotters were appalled at how the chimpanzee could get the best room in town, but humans were being rejected.

Overcoming racism was a double-edged sword for the Globetrotters.

In contrast, the Globetrotters were adored and treated like royalty abroad. The team’s trip to Europe in 1950 was a smashing success. The United States’ government immediately saw potential in the Globetrotters for international relations. Starting in 1951, the Harlem Globetrotters began a subsidized tour of the world, eventually extending to beyond the Iron Curtain in 1959.

The U.S. State Department knew the Globetrotters would combat the image of a racial divide painted by communist propagandists, but the Globetrotters themselves became a tool for American propaganda. The Globetrotters’ depiction of free black men came into conflict with segregation that persisted in the Jim Crow South.

Overcoming racism was a double-edged sword for the Globetrotters. Ex-Globetrotter Connie Hawkins, along with tennis player Arthur Ashe, the New York Rens’ long-time owner, and an op-ed in the New York Times all advanced the claim that the Globetrotters were “Uncle Toms” because their hijinks catered to white preferences and Abe Saperstein was a racist, white owner.

The profit motive is what gave the players a chance to prove themselves and pave the way towards integrated professional basketball.

Accusing the Globetrotters of perpetuating a racist society, or “Tomming for Abe,” was a terribly short-sighted misconception. Consumer demand for the ‘Trotters existed from both black and white audiences as the team would regularly play two games per night, one for a white audience and one for a black audience.

The inability to draw crowds pressured the NBA to become more entertaining and be more like the Harlem Globetrotters. The profit motive is what gave the players a chance to prove themselves and pave the way towards integrated professional basketball. The Globetrotters won on the courts and in the market.

The Harlem Globetrotters heralded a new era of liberty but were accused of being sycophants to a system that had long exploited African-Americans. Reece “Goose” Tatum, Marques Haynes, Ermer Robinson, Louis “Babe” Pressley, and Nate “Sweetwater” Clifton are a few of the underappreciated heroes of racial equality in basketball.

Today, the Globetrotters are pop-culture icons, having made appearances in 122 countries and on several television shows. The team also became the first sports franchise owned by an African-American when Globie Mannie Jackson purchased the team in 1993. Basketball fans everywhere enjoy the ‘Trotters for their shenanigans, and although no longer a competitive team, the Harlem Globetrotters remain involved in communities worldwide by entertaining children, teaching basketball, and promoting freedom.

Michael Kastner is an economist and research fellow at the Johnson Center for Political Economy at Troy University.