How Should We Grade the Republican Tax Plan?

The proposed Republican tax plan is a mixed bag, so here's a section-by-section review of each aspect.

Is this something to celebrate? Well, that depends on whether you’re grading on a curve. Compared to a pure, simple, and fair flat tax, it’s timid and disappointing.

But compared to today’s wretched and unfair tax code, there are some very positive changes.

At the end of 2015, I reviewed the major tax plans put forth by the various presidential candidates, grading them on issues such as tax rates, double taxation, and simplicity. 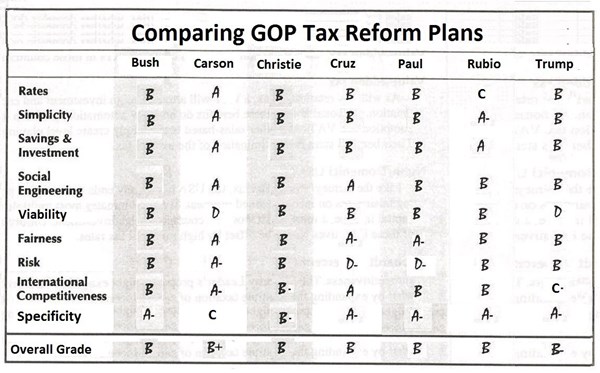 Trump’s plan got the lowest score, though “B-” nonetheless represented a non-trivial improvement over the status quo.

And since he wound up in the White House, nobody should be surprised to see that many of his priorities are reflected in the House plan.

So let’s grade the major provisions of this new proposal (with the caveat that grades may change as more details emerge).

America’s high corporate tax rate is probably the most self-destructive feature of the current system. If the rate is permanently reduced from 35 percent to 20 percent, that will be a huge boost to competitiveness.

The proposal is relatively timid on rate reductions for households. This is disappointing, but not unexpected since lower individual tax rates mean considerable revenue loss.

Ending deduction for state and local income taxes: A+

Next to the lower corporate tax rate, this is the most encouraging part of the proposal. It generates revenue to use for pro-growth provisions while also eliminating a subsidy for bad policy on the part of state and local governments.

Instead of allowing mortgage interest deduction on homes up to $1 million, the cap is reduced to $500,000. A modest but positive improvement that will reduce the distortion that creates a bias for residential real estate compared to business investment.

Don’t die for six years, because that’s how long it will take before the death tax is repealed. But if we actually get to that point, this will represent a very positive change to the tax system.

It is quite likely that the consumer price index overstates inflation because it doesn’t properly capture increases in the quality of goods and services. Shifting to a different price index will lead to higher revenues because tax brackets and other provisions of the tax code won’t adjust at the same rate. That’s fine, but I’m dissatisfied with this provision since it should apply to spending programs as well as the tax code.

The business interest deduction is partially undone, which is a step toward equal treatment of debt and equity. It’s not the right way of achieving that goal, but it does generate revenue to finance other pro-growth changes in the legislation.

Here’s a useful summary from the Wall Street Journal of changes to business taxation. 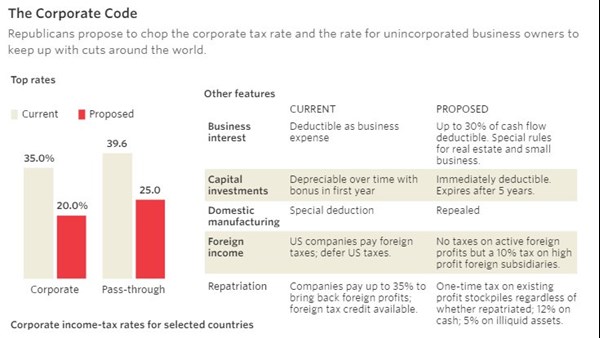 Now let’s zoom out and grade the overall plan in terms of major fiscal and economic goals.

Restraining the growth of government: F

In my fantasy world, I want a return to the very small federal government created and envisioned by the Founding Fathers. In the real world, I simply hope for a modest bit of spending restraint. This legislation doesn’t even pretend to curtail the growth of government, which is unfortunate since some fiscal prudence (federal budget growing about 2 percent per year) would have allowed a very large tax cut while also balancing the budget within 10 years.

Collecting revenue in a less-destructive manner: B

This is a positive proposal. It will mean more jobs, increased competitiveness, and higher incomes. The wonks in Washington doubtlessly will debate whether these positive effects are small or large, but I’m not overly fixated on that issue. Yes, I think the growth effects will be significant, but I also realize that many other policies also determine economic performance. The most important thing to understand, though, is that even small increases in growth make a big difference over time.

The bottom line is that half a loaf (or, in this case, a fourth of a loaf) is better than nothing. House Republicans have a good plan. Now the question is whether the Senate makes it better or worse (hint: don’t be optimistic).