No longer the party of truly free markets, some Republicans have come to view the government as a mere vehicle for job creation. 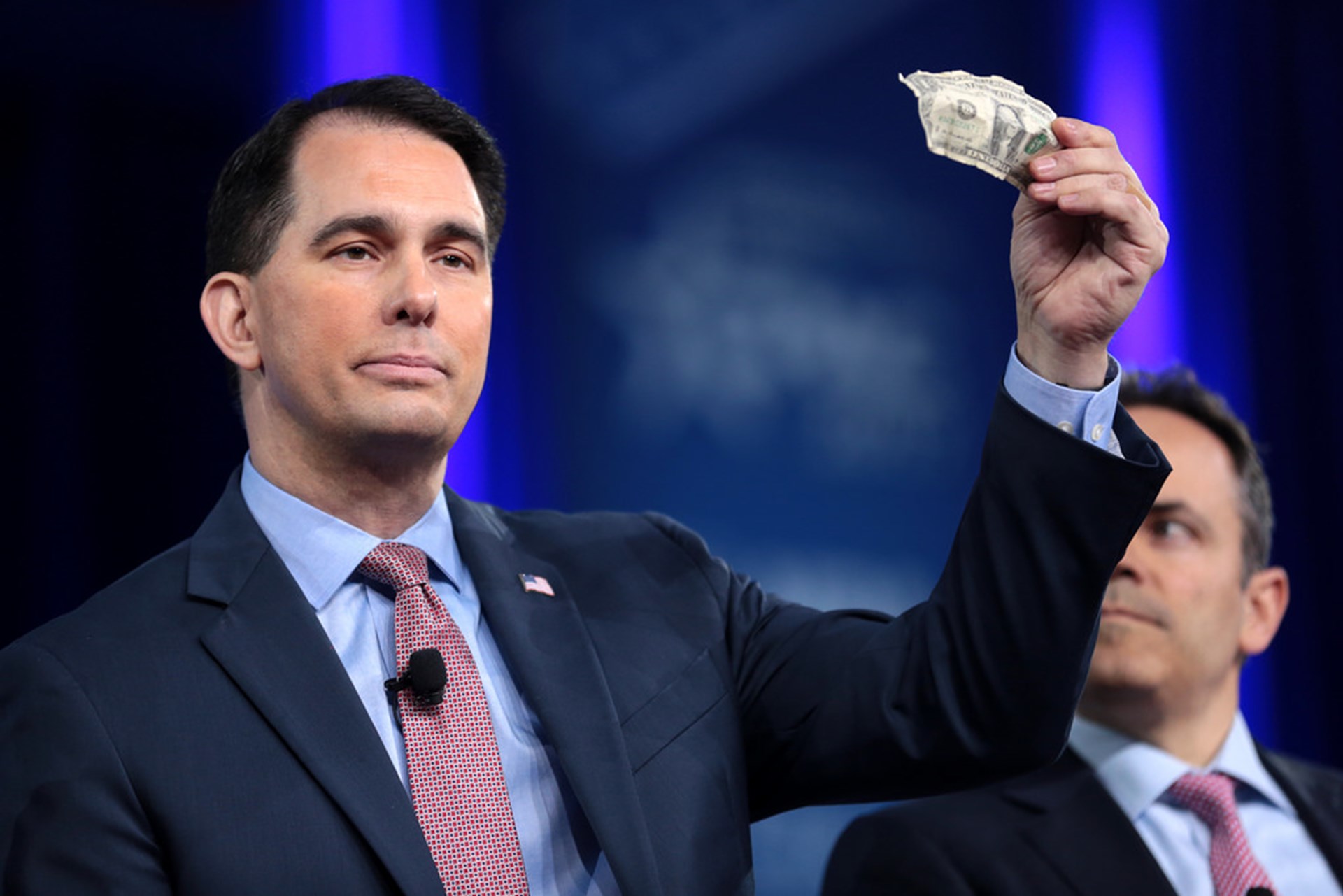 “It’s not the government that creates jobs; it’s the people who create jobs. The best thing we can do is get the government out of the way.” That’s what Wisconsin Governor Scott Walker said back in 2012. If only he’d taken his own advice.

Corporate Welfare at the Expense of Citizens

In his second and last term as Wisconsin governor, Walker approved a deal in which the state and local governments of Wisconsin will provide nearly $4.8 billion in tax breaks and subsidies to Foxconn, a Taiwanese electronics company, so they can build one new factory in the city of Mount Pleasant. The plant is set to cost Wisconsinites an average of $1,800 per taxpayer, with $346,000 being spent on each job created, much more than the average salary the jobs will offer.

As two years of Republican hegemony spanning all levels of government come to an end, the Foxconn deal is just more evidence that the party has grown increasingly out of touch with its core economic principles.

Far from “getting out of the way,” the Walker administration tried to use government power to create jobs—but did so at the expense of its citizens. As two years of Republican hegemony spanning all levels of government come to an end, the Foxconn deal is just more evidence that the party has grown increasingly out of touch with its core economic principles.

Even though Republicans held majorities in both the Senate and the House of Representatives in the 115th Congress, they still passed some of the most crony-esque legislation in recent memory. President Trump signed the Bipartisan Budget Act of 2018 on February 9, which contained a laundry list of tax breaks and subsidies for special interests. This included tax incentives for electric motorcycles, racehorses, motorsport entertainment complexes, and mining equipment. Trump also signed into law a reauthorization of the National Flood Insurance Program, a flood insurance subsidy program that often favors insurance companies over the citizens it was designed to protect.

Meanwhile, both chambers of Congress passed the 2018 farm bill—swampy and corrupt even by depressingly low farm bill standards. A 2017 Congressional Research Service report found that the 12 percent of farm households with a revenue greater than $250,000 a year receive 60 percent of the state’s agricultural subsidies. No longer the party of truly free markets, some congressional Republicans have come to view the government as a mere vehicle for job creation.

So Much for the Free Market

Corporate welfare has remained the norm in the executive branch, as well. Government agencies like the Overseas Private Investment Corporation and the Rural Business-Cooperative Service continue to support failing businesses and dubious foreign investments with tax breaks and subsidies. The Export-Import Bank, perhaps the federal government’s largest driver of corporate welfare, continues to operate unimpeded. It provides subsidies and tax incentives to the politically-connected under the guise of boosting American exports.

Trump has also introduced tariffs on several major imports, which benefits specific industries at the expense of American consumers. He has even floated the prospect of subsidies for failing coal power plants rendered ineffective by technological advancement. While the Obama administration could at least claim its corporate handouts to green tech companies were in the interest of combating climate change, Trump’s willingness to subsidize failing fossil fuels reveals his energy subsidies as the corporate welfare they actually are.

The GOP has embraced displays of job creation they can brag about, ignoring the often invisible ramifications of such government-driven actions. Subsidies, tax breaks, and other forms of corporate welfare all benefit the companies with the best lobbyists—not the best business model.

So much for the free market. The GOP has embraced displays of job creation they can brag about, ignoring the often invisible ramifications of such government-driven actions. Subsidies, tax breaks, and other forms of corporate welfare all benefit the companies with the best lobbyists—not the best business model. Cronyism erodes market competition, leading to higher prices for consumers and reduced innovation. In addition, every tax dollar used to subsidize a corporation is a dollar that could have been spent or invested elsewhere in the economy.

Even worse, subsidies often fail to meet their goals in the first place. Although Walker did successfully encourage the construction of a new factory in Wisconsin rather than Asia, Foxconn has allegedly toyed with the prospect of importing foreign labor—especially given the dearth of American workers with the required skills.

For those hoping the trend toward corporate welfare will reverse following Democrats’ gains in the midterms, disappointment is imminent. You don’t have to look beyond the massive tax breaks given by Democrat-controlled New York to Amazon in their bid for HQ2 for a glimpse of what’s to come. Perhaps one day a major political party will take a stand against corporate welfare that goes beyond a mere campaign slogan. But for now, neither party is actually advocating for free and fair markets.

Michael received his B.A. (2016) from the University of Michigan in history, with a specialization in East Asian history.  His thesis, “Reverse Course: The Secret Battle for the Japanese Economy”, focused on the ideological disputes involved in the reconstruction of the Japanese economy after World War II and won the William P. Malm Award for Outstanding Student Writing in Japanese Studies and the Arthur Fondiler Award for Best Undergraduate Thesis.  He worked as an intern for the Cato Institute and Libertarianism.org in Fall 2016.