I’ve repeatedly argued that faster growth is the only effective way to help the less fortunate.

Class warfare and redistribution, by contrast, are not effective. Such policies are based on the fallacy that the economy is a fixed pie, and proponents of this view fixate on inequality because they mistakenly believe additional income for the rich means less income for the poor.

Today, let’s look at some numbers that prove this fixation on inequality is misguided. The Census Bureau this week released its annual "Income and Poverty in the United States" report. That publication includes data (Table A-2) showing annual inflation-adjusted earnings by income quintile between 1967-2017.

To see if my left-leaning friends are right about the rich getting richer at the expense of the poor, I calculated the annual percent change for each quintile. Lo and behold, the data actually demonstrate that there’s a very clear pattern showing that all income quintiles tend to rise and fall together. 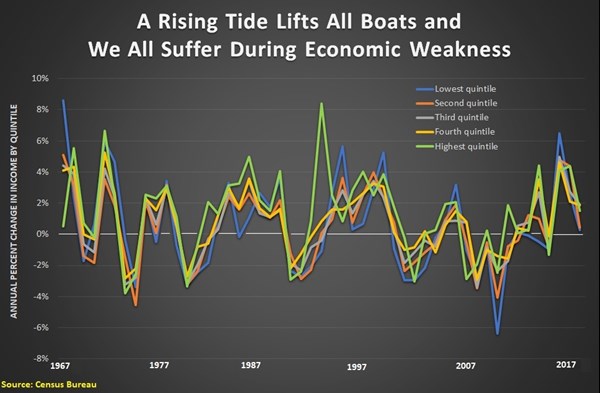 And if you hate the rich, you need to realize that policies hurting them will almost certainly hurt the less fortunate, as well.

And if you hate the rich, you need to realize that policies hurting them will almost certainly hurt the less fortunate, as well.

One other lesson is that all income quintiles did particularly well during the 1980s and 1990s when free market policies prevailed.

P.S. Many people (including on the left) have pointed out that the Census Bureau’s numbers undercount compensation because fringe benefits such as healthcare are excluded. This is a very legitimate complaint, but it doesn’t change the fact that all income quintiles tend to rise and fall together. For what it’s worth, adding other forms of compensation would boost lower quintiles compared to higher quintiles.

P.P.S. Here’s an interesting video from Pew Research showing how the middle class has become more prosperous over the past few decades.

P.P.P.S. The Census Bureau’s report also has the latest data on poverty. The good news is that the poverty rate fell. The bad news is that long-run progress ground to a halt once the federal government launched the ill-fated War on Poverty.

Reprinted with permission from International Liberty.