The Big Three have become “addicted to the easy money” they are allowed to pick from the pockets of U.S. vehicle buyers with help from their government enablers. 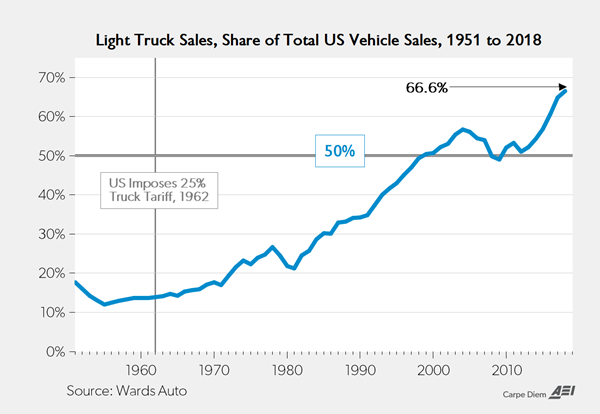 We hear all the time that the U.S. has relatively low tariffs and opens its markets to the world, while other countries impose unfair high tariffs and trade barriers that keep foreign markets closed to U.S. exports.

Team Trump frequently points out that the U.S. tariff on foreign automobiles is only 2.5 percent, while Europe has a 10 percent import tariff. Further, China's import tariffs on cars were reduced to 15 percent in May before going back up to 25 percent as a retaliatory measure following Trump’s announcement of tariffs on $16 billion of China’s products in August.

What Trump conveniently ignores is that the U.S. has had a 25 percent tariff on imports of light trucks (and two-seat SUVs) for more than 50 years. What makes that especially important is that the truck share of the U.S. vehicle market has been above 50 percent in every year since 1999, except for two years (2008 and 2009) during the Great Recession, and rose during the first quarter of this year to an all-time high of 66.6 percent (see chart above).

In 2009, Harvard Professor of International Trade and Investment Robert Lawrence wrote a guest blog post on Harvard economist Dani Rodrick’s blog titled “The chickens have come home to roost.” The article detailed the 1964 “Chicken Tax”—the 25 percent tariff/tax on imported light-duty pickup trucks, which has insulated the Big Three (Ford, GM, and Chrysler) from foreign competition in the truck market for more than half a century:

Although we call the Big Three automobile companies they have basically specialized in building trucks [see chart above]. This left them utterly unable to respond when high gas prices shifted the market towards hybrids and more fuel-efficient cars.

One reason is that Americans like to drive SUVs, minivans, and small trucks when gasoline costs $1.50 to $2.00 a gallon. But another is that the profit margins have been much higher on trucks and vans because the U.S. protects its domestic market with a 25 percent tariff. By contrast, the import tariff on regular automobiles is just 2.5 percent, and U.S. duties from tariffs on all imported goods are just 1 percent of the overall value of merchandise imports. Since many of the inputs used to assemble trucks are not subject to tariffs anywhere near 25 percent—U.S. tariffs on all goods average only 3.5 percent—the effective protection and subsidy equivalent of this policy has been huge.

What accounts for this distinctive treatment of trucks? An accident of history that shows how hard it is for the government to withdraw favors even when they have no sound policy justification. It all comes down to the long forgotten Chicken Wars of the 1960s. In 1962, when implementing the European Common Market, the Community denied access to U.S. chicken producers. In response, after being unable to resolve the issue diplomatically, the U.S. responded in 1964 with retaliatory tariffs that included a 25 percent tariff on trucks that was aimed at the German Volkswagen Combi-Bus that was enjoying brisk sales in the U.S.

Since the trade (GATT) rules required that retaliation be applied on a non-discriminatory basis, the tariffs were levied on all truck-type vehicles imported from all countries and have never been removed. Over time, the Germans stopped building these vehicles, and today the tariffs are mainly paid on trucks coming from Asia. The tariffs have bred bad habits, steering Detroit away from building high-quality automobiles towards trucks and truck-like cars that have suddenly fallen into disfavor.

If Congress wants an explanation for why the Big Three have been so uncompetitive, it should look first at the disguised largess it has been providing them with for years. It has taken a long time—nearly 47 years—but it seems that eventually the chickens have finally come home to roost.

The “chicken tax” has effectively insulated U.S. truck manufacturers from competition for five long decades. That’s kept prices high and created huge profit centers at Chrysler, Ford, and General Motors—so much so, some argue, that the Big Three have slacked off in developing innovative cars because they’ve become addicted to the easy money offered by pickups.

Profits from hundreds of thousands of Ford F-150 and Chevrolet Silverado pickups have stayed disproportionately high because any truck built outside North America had a 25 percent tariff slapped onto its price (versus just 2.5 percent on cars). Addicted to that easy money, Detroit stopped paying attention to passenger cars. Which is easy to believe if you’ve driven a 2009 Dodge Caliber or 2009 Chevrolet Cobalt, neither of them remotely competitive with the best compacts from Honda or Toyota.

Americans love pickup trucks. They are rugged and utilitarian, like the American pioneer. They serve our inclination toward industriousness. Pickups embody the American spirit. But the “Big Three” harbor a shameful secret. The industry is not as tough as the “like a rock” image it projects. Behind the façade, the industry fears foreign competition. And it forces its loyal customers to flip the bill for that insecurity.

Foreign-made pickup trucks are subject to a 25 percent import tariff, a policy heartily endorsed by U.S. producers. So a foreign truck valued at $20,000 costs the importer $25,000 before he can even clear customs. Meanwhile, domestic producers of $20,000 pickups have an artificial $5,000 cushion, enabling them to increase prices without appearing out of line.

At 25 percent, the import tariff is virtually prohibitive. In 2001, fewer than 7,000 pickups were imported from outside North America. That’s only 0.23 percent of almost three million purchased. Without imports, supply is smaller, choices are fewer, and domestic producers are the only game in town. It’s a veritable sellers’ market, sanctioned under official U.S. policy. And truck buyers—if you’ll pardon the pun—carry the load.

MP: As much as we hear the constant narrative from Team Trump that America is an open market compared to other countries, and that those countries must, therefore, be punished for their “unfair” trade practices with import tariffs (actually, of course, it’s Americans who are being punished with higher taxes and prices), the U.S. truck market provides a counter-example of a U.S. market that is basically closed to foreign imports because of the prohibitive 25 percent “chicken tax.” With a two-thirds market share today for trucks and SUVs, only one-third of the U.S. vehicle market—passenger cars—is really a market open for imports with a low 2.5 percent tariff rate, while the large majority of our vehicle market is basically closed to imports with the 25 percent tariff on trucks and SUVs.

Maybe it’s time now to end the “chicken tax” on imported trucks and finally put an end to 50+ years of anti-consumer protectionism for what has become two-thirds of the U.S. vehicle market. Probably not likely though since that share of the market is by far the most lucrative and profitable, and the Big Three have become “addicted to the easy money” they are allowed to pick from the pockets of U.S. vehicle buyers with help from their government enablers.