Hillary Will Tax You to Death... And Then Tax You for Dying

What’s the worst possible tax hike, the one that would do the most economic damage?

Raising income tax rates is never a good idea, and there’s powerful evidence from the 1980s about how upper-income taxpayers have considerable ability to change their behavior in response to changes in incentives.

But if you want to know the tax hikes that do the most damage, on a per-dollar raised basis, it’s probably best to focus on levies that boost double taxation of saving and investment.

The Tax Foundation ran some estimates on five different tax increases, for instance, and found that worsening depreciation rules (an arcane part of the tax code dealing with the degree to which new investment is taxed) would do the most damage, followed by a higher corporate tax rate, and then higher individual income tax rates. 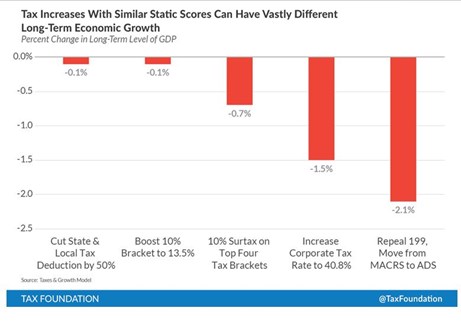 But I wonder what they would have found if they also modeled the impact of a higher death tax. That levy is particularly destructive because it directly requires the liquidation of capital. The assets of investors, entrepreneurs, farmers, small business owners, and other victims take a big hit as politicians grab as much as 40 percent of what they’ve worked for during their lives. 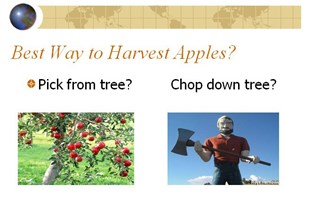 This is bad for the economy because it directly reduces the capital stock. Sort of like harvesting apples by cutting down 40 percent of the trees in an orchard. The net result is that the economy’s ability to generate future income is undermined.

But it’s also bad for the economy because it reduces incentives for successful taxpayers to both earn and invest while they’re alive. Why bust your rear end when the government immediately will take at least 39.6 percent (actually more when you consider Medicare taxes, state taxes, and double taxation of interest, dividends, and capital gains) of your income, and then another 40 percent of what you’ve saved and invested when you kick the bucket?

Unfortunately, Hillary Clinton doesn’t seem to care about such matters. She actually just decided to double down on her destructive tax agenda by endorsing an even bigger increase in the death tax.

The editorial page of the Wall Street Journal is not exactly impressed by Hillary’s class-warfare poison.

On Thursday she decided that her proposal to raise the death tax to 45% from 40% isn’t enough and endorsed even higher levies that would apply to thousands of estates. Though she defeated Bernie Sanders in the primary, she is adopting the socialist’s death-tax rate structure. She’d tax all estates over $10 million at 50%, apply a 55% rate on estates over $50 million, and go to 65% on assets above $500 million. The 65% rate would be the highest since 1981 and is another example of how she is repudiating the more moderate policies of her husband and the Democrats of the 1990s. …the Sanders plan that Mrs. Clinton is copying did not index exemption levels for inflation. …Mrs. Clinton would also end the “step-up in basis” on stock valuations for many filers, triggering big capital gains taxes for a much broader population.

Wow, this is class warfare on steroids. And the part about this being more like Bernie Sanders than Bill Clinton hits the mark. Economic freedom actually increased in America between 1992 and 2000. 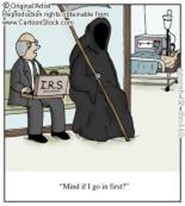 Hillary, by contrast, is a doctrinaire and reflexive statist. I’m not aware of a single position she’s taken that would reduce the burden of government.

By the way, here’s a bit of information that won’t shock anyone familiar with the greed and hypocrisy of the political class.

Hillary and her friends will largely dodge the tax, which mostly will fall on small business owners who lack the ability to create clever structures.

…most of her rich friends will set up foundations, as she and Bill Clinton have, to shelter most of their riches from the estate tax. …In any case, Mrs. Clinton is now promising total tax hikes of $1.5 trillion over a decade if elected President.

Gee, knock me over with a feather.

The Tax Foundation may not have included the death tax when it compared the harm of different tax hikes, but it has looked at how the death tax hurts the economy by discouraging capital formation and capital accumulation.

…an estate tax increase would cause economic production to be allocated away from business equipment, reducing the quantity of business equipment in the economy. …Many of the assets that fall under the estate tax, such as residential structures, commercial structures, and business equipment, enhance productivity, or gross domestic product (GDP) per hour worked. …The relationship between these assets and productivity is the focus of one of the most common models in economics, an equation called the Cobb-Douglas production function, which describes how workers and capital goods together produce economic output. Under this model, more capital increases output or income, even as the number of workers is held constant. It therefore increases GDP per hour worked, making people richer. Under such a model, reallocating economic production away from the capital goods that enhance output would reduce GDP in the long run. This is an effect that one might expect to see in a macroeconomic analysis of the estate tax.

Amen. If you want more output and higher living standards, you need to boost worker pay by increasing the quality and quantity of capital in the economy.

Here are the estimates of what happens to the economy with a 65 percent death tax. 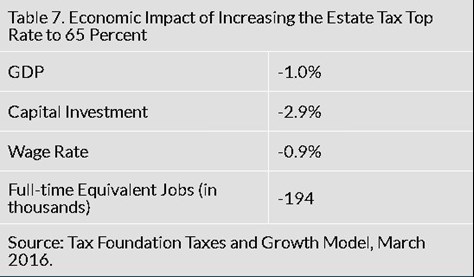 So what would happen if lawmakers instead did the right thing and abolished this wretched example of double taxation?

The Tax Foundation has crunched the numbers. Here’s the impact on the overall economy. 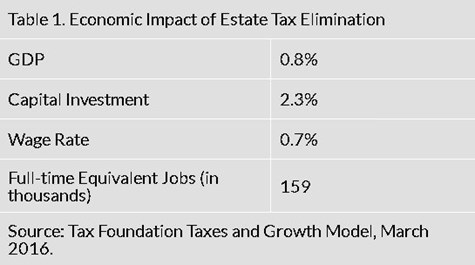 And here’s what happens to federal revenue over the same period. 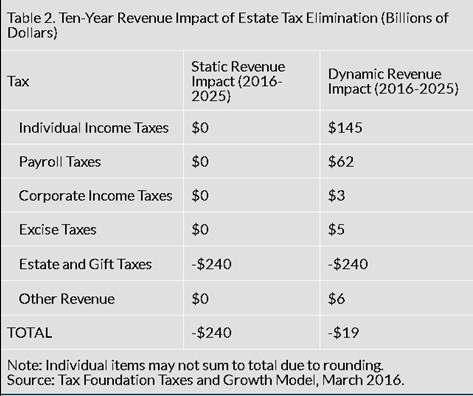 By the way, the Wall Street Journal editorial cited above did contain a bit of good news.

Congress is starting to push back against President Obama’s stealth death tax increase. Rep. Warren Davidson (R., Ohio) read our recent editorial about Treasury plans to raise taxes on minority stakes in family businesses by artificially inflating their value, and he’s drafted a bill to stop Treasury’s tax grab as a violation of the separation of powers. …A former owner of several businesses, Mr. Davidson says the U.S. economy needs owners focused on “growing assets, not structuring them for life events.” He explains that many farms in particular may carry high values but hold little cash, and so the death tax triggers land sales to pay the IRS. “The whole concept of a death tax is immoral,” Mr. Davidson says, and he’s right. The tax confiscates assets that have already been taxed once or more when first earned, and it punishes a lifetime of investment and thrift.

I wrote about this issue the other day, so I’m glad to see that there’s pushback against this Obama Administration scheme to unilaterally boost the burden of the death tax.

P.S. Politicians are not the only beneficiaries of the death tax.