Hillary Clinton: A Portrait of Power and Corruption

The promise of power consumes and corrupts her noble goals. 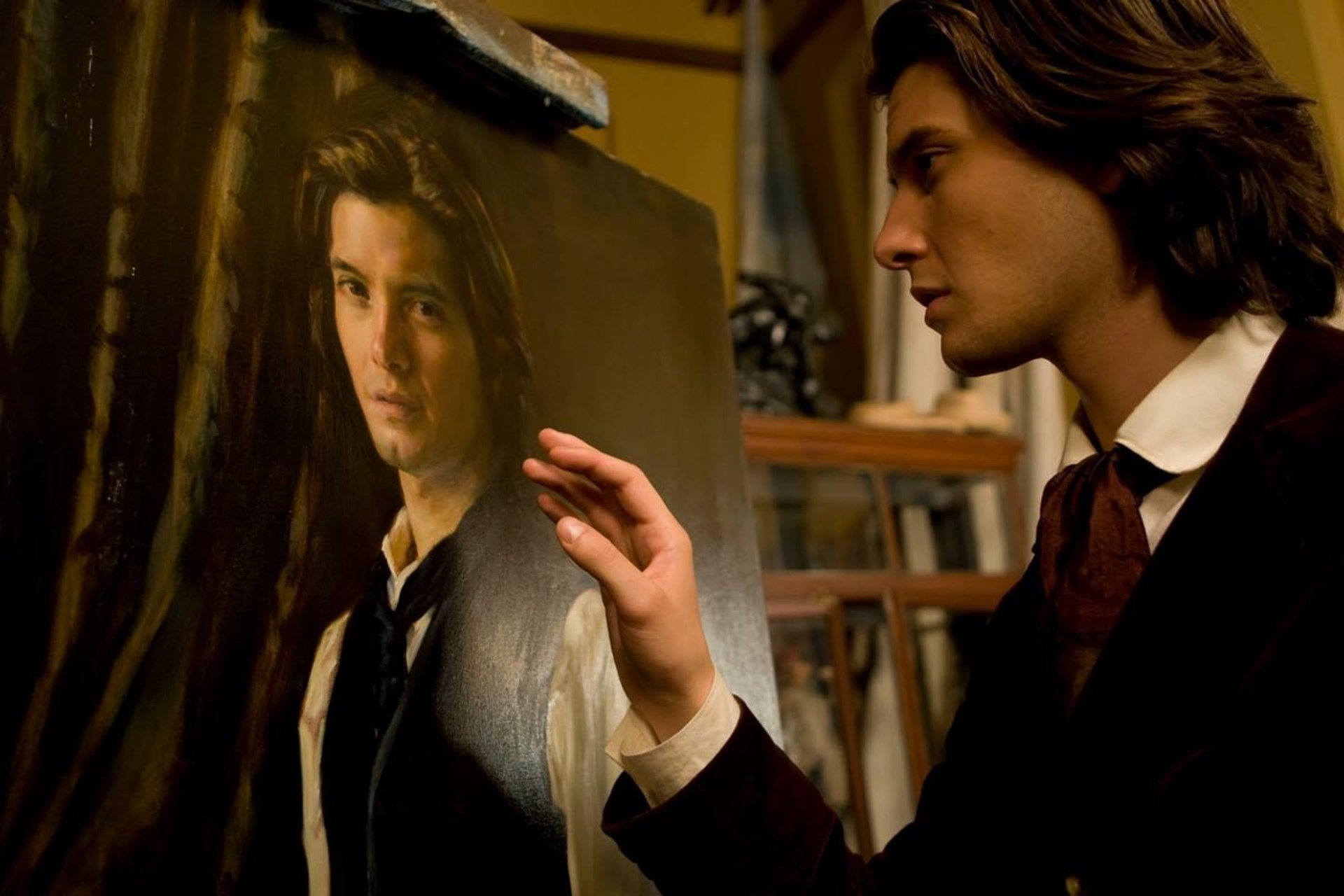 In The Picture of Dorian Gray, a decaying painting is locked away to decay in its attic mausoleum as a symbol of a beautiful boy’s tarnished soul. By way of contrast, the embodiment of America’s ruling class now lives and breathes in the public persona of one person, Hillary Clinton.

Compromise after compromise of principles is made for the sake of power. After years of toiling in the halls of power, the presidency finally seems hers for the taking. Yet, the closer Hillary comes to assuming the presidential chair, the closer Americans examine her public pose only to recoil.

Many Americans agree there is something about the shadow and shade of Hillary’s portrait that leaves more questions than answers, a “touch of cruelty” seeping through the cracks in her carefully crafted façade.

In a word, many Americans find her “mendacious,” and the revelations regarding the appearance of the Clinton State Department’s “pay-to-play” scheme – delivering special access and favors to Clinton Foundation donors – is only the latest episode in a long series of scandals besmirching her trustworthiness.

The revelations – and there are more to come and they will never end – is shocking and not shocking. If you think government is good, clean, and constantly striving for the public good, seeing all this up close must be startling. Most thinking people long ago let go of their naïveté about government and therefore find nothing particularly surprising about any of this.

Is this appearance of impropriety just in the eyes of her beholders? Are Americans simply projecting their worst fears about their politics onto her as the Clintons and their supporters would have us believe? Or is there something truly nefarious lurking beneath the surface?

I venture the answer is a bit of both.

Hillary Clinton strikes me at once as a Faustian figure, but rather than making a deal with the devil for eternal youth or unlimited knowledge, she has asked for state power.

Spurred by her idealism to serve the poor and underprivileged, this victim of her own privilege has engaged in a bargain time immemorial: give me the power of the state to kill and steal and coerce other people with impunity, and I will use this power to bring social justice to the land. Like most before her who have made this pact, the promise of power consumes and corrupts her noble goals.

Where power may begin as simply a means to achieve one’s dreams, winning and wielding power ultimately becomes the dream itself. Compromise after compromise of principles is made for the sake of power. Sacrifice after sacrifice of others is offered for the sake of power. Lie after lie is told for the sake of keeping the truth of power-hungry dreams alive. One’s ideals become hollow pretense, mere words, and the curse of power takes hold, i.e. for every good deed done, two or three “necessary” evils must be committed.

Such appears to be the tragic tale of Hillary Rodham Clinton.

In 1969, Hillary Clinton wrote her senior thesis, titled “There Is Only the Fight,” on the work of that now infamous radical, Saul Alinsky. Alinsky seems to have played the same role for young Hillary Rodham that Lord Henry Wotton played for young Dorian Gray – the enchanting snake in the Garden of Eden. At the beginning of his own book, Rules for Radicals, Alinsky quotes himself:

Lest we forget at least an over-the-shoulder acknowledgment to the very first radical: from all our legends, mythology, and history (and who is to know where mythology leaves off and history begins — or which is which), the first radical known to man who rebelled against the establishment and did it so effectively that he at least won his own kingdom — Lucifer.

That said, Hillary diverges with her role model Alinsky in her thesis on one crucial point. Rather than rebelling against the establishment to win her own kingdom, she would become the establishment. Mark Leibovich provides a telling summary of this schism in his 2007 piece for The New York Times:

Beyond Mr. Alinsky, the treatise yields insights about its author. Gaining power, Ms. Rodham asserted, was at the core of effective activism. It “is the very essence of life, the dynamo of life,” she wrote, quoting Mr. Alinsky.

Ms. Rodham endorsed Mr. Alinsky’s central critique of government antipoverty programs — that they tended to be too top-down and removed from the wishes of individuals.

But the student leader split with Mr. Alinsky over a central point. He vowed to “rub raw the sores of discontent” and compel action through agitation. This, she believed, ran counter to the notion of change within the system.

Nearly half a century after these youthful aspirations, Hillary Clinton appears to have nearly come full circle. No longer is she simply the academic activist adorned with thick-framed spectacles hoping to change the establishment from within.

Well, before that question is answered, Americans should be asking more questions not only about Hillary Clinton but about the very the nature of state power itself.

Do Hillary Clinton’s “noble” ends justify her choice of means, her ambitions for state power?

In my opinion, the answer is a firm “no,” but I do not say this as something unique to Hillary Clinton. She comes from a long line of murderers and thieves dressed up in high ideals – the type of person Isabel Paterson once called the “humanitarian with the guillotine,” – those who, as Paterson wrote, cause great harm as “the result of their deliberate actions, long persevered in, which they hold to be motivated by high ideals toward virtuous ends.” In step, Hillary is quick to downplay her mistakes and the “collateral damage” left in her wake in the name of her “virtuous ends.”

One may realize the promise of power is one of the oldest temptations known to man, leading to mistake after bloody mistake. Just think of all the “humanitarian” foreign policy adventures to Hillary’s name, carried out with weapons much more powerful than any guillotine – she pushed the bombing of former Yugoslavia in the 1990s, advocated strongly for the invasion of Iraq in 2003, supported the 2009 troop surge in Afghanistan (which led to the majority of American deaths in the Afghan war), orchestrated the 2009 coup in Honduras, supported the revolutionary overthrow of Hosni Mubarak 2011, led the policy to violently overthrow Libyan President Muammar Gaddafi in the same year only to smugly giggle at his death, and persists in her defense of the use of drone warfare that kills innocents across the globe from Yemen to Pakistan while continuing to advocate the arming of Syrian rebels as part of her on-going support for the overthrow of ISIS’s enemy, Syrian President Bashar al-Assad.

To Clinton, the ends really do justify the means. But again, this is not unique to Hillary Clinton. No, when engaged in the pursuit of political power, the politician is always certain of her truths and victories while being forever ignorant of her falsehoods and failures. She is happy to remember the parades in her honor, but it darkens her doorstep to remind her of the times when she blindly marched people to folly.

At the bottom of politics, there is a smarmy certainty, a sort of bad faith, underlying the whole hubbub. Politics relies on this faith in power – on a willingness to create a vision in one’s mind and force it upon the rest of the world with audacious violence – and accordingly the cornerstone of statecraft is drenched in sure-fire sacrifices.

Faith in state power and the corruption that follows may not be unique to Hillary Clinton – before writing Clinton Cash, author Peter Schweizer wrote another excellent book, Extortion, outlining how our dear public servants systematically use their political power to manipulate those they supposedly serve – but Hillary’s career in politics certainly provides a crash course in how such a faith corrupts.

Whether it be her support of NSA mass surveillance programs, her penchant to centrally plan the American economy through a morass of crony capitalists enabling job-killing policies, or the Clinton Foundation’s global pay-for-play scheme, Hillary has in many ways become the very establishment she used to dream of replacing. She makes the ‘69 establishment President Richard Nixon look like a domesticated pussy cat, as she escalates America’s imperial wars, facilitates arms deals for Clinton Foundation donors, and continually lies to the American public about her own record.

When did Clinton stop agreeing with Alinsky that the government’s programs are “too top-down” and removed from the wishes of individuals on the ground? Just as Dorian Gray’s indifference for anything other than his search for beauty led him down a dark path, how many more Sibyl Vane’s must be driven into death’s arms by Hillary Clinton for her to see the cruelty that flows out of her indifference for those who oppose her pursuit and use of state power?

I fear there will never be enough. As much as her public persona is the current portrait of the American ruling class, I fear Hillary Clinton will always see herself battling against the status quo—always fearful and envious of the status quo to come if she not the one in control.

She may be right for the time being. Though I highly encourage everyone to watch the documentaries Clinton Cash and Poverty, Inc., to read books critical of the Clintons such as the late Christopher Hitchens’ No One Left to Lie To, and to follow the details reported on the Clintons’ back room dealings, I also encourage people not to lose sight of the larger problem: the state itself.

A Portrait or Mirror?

Many Americans do seem to be projecting their worst fears about politics onto the Clintons without seeing the same horrible qualities in their own political champions. As awful as Hillary Clinton may be, Donald Trump may prove to be just as bullying, murderous, and thieving. And if not Donald Trump or Hillary Clinton, someone else will take their place if Americans do not see the portrait of the American establishment is no portrait at all but a mirror.

Someone else will take their place if we do not see that the establishment is no portrait, but a mirror.So, the next time you recoil in the face of Hillary’s corruption ask yourself, “Would I or the people I support truly behave any differently in such a wicked world?” This not as a way of excusing any corrupt power, but as a reminder of how power can corrupt to even the best of our intentions.

As long as human beings, free of regret, continue to make the mistake of granting immense power and impunity to “their” governments, there will always be cronies to damn, corruption to root out, establishments to fight, and innocent fellows trampled underfoot in the process.

Hopefully, we will one day realize the promise of power is one of the oldest temptations known to man, leading to mistake after bloody mistake. But until that day comes, it seems Lord Henry Wotton has our number when he whispers like a snake to anyone who will listen, “That is one of the great secrets of life. Nowadays most people die of a sort of creeping common sense and discover too late that the only things one never regrets are one's mistakes.”

With such a motto ringing in our ears, I can expect we will soon see the portrait of President Hillary Rodham Clinton staring back at us through shadow and shade with a touch of cruelty.