Highlights from a Day of FEEcon 2018

James Walpole gives an attendee's-eye-view of a single day of FEEcon 2018.

I’m terribly proud of my friends at the Foundation for Economic Education (FEE). With FEEcon, they’ve put on an event which has brought together young people from all over the United States (and several other countries) to celebrate freedom and inspire action.

FEE put together a great track of speakers and content for this year’s FEEcon, and I was lucky to attend many on Friday. Here’s a short play by play of my Friday at FEEcon 2018.

I got to the beautiful Hyatt Regency for the conference shortly before noon and immediately saw an old pal on the escalator. I love that about conferences—I was going around giving big old hugs to people I haven’t seen in a year.

I arrived at a packed room for my first breakout session of the day, given by my Praxis friends (and, let’s admit it, heroes) Isaac Morehouse, Derek Magill, and TK Coleman. The title of the session was “Stop Asking Permission: How to Launch a Career that Doesn’t Suck.” 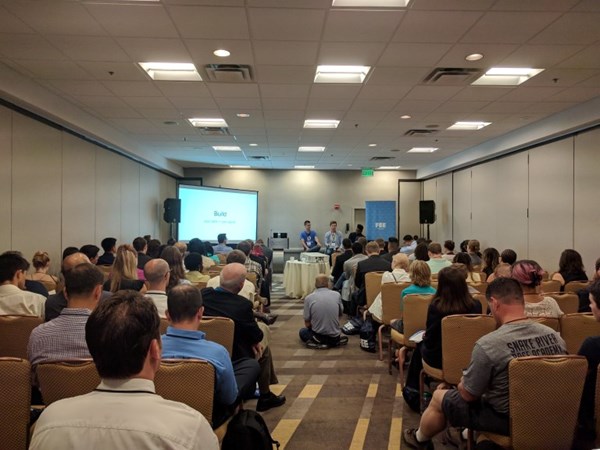 Some key takeaways for me: 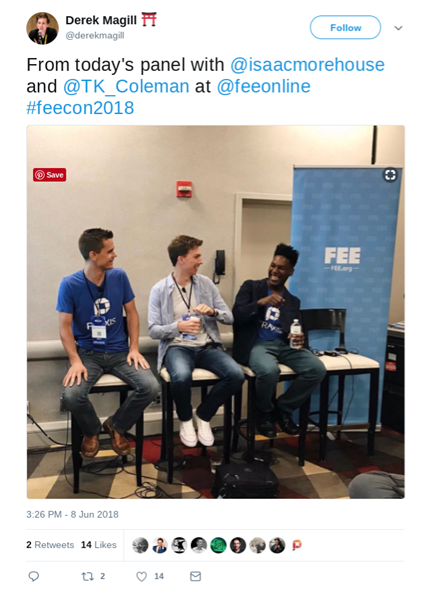 After a good chat with my man Nate Baker from Students for Liberty, I made my way to a panel in FEEcon’s creative track: “Honing Your Craft: Learning to Take Criticism from Trusted Mentors”: 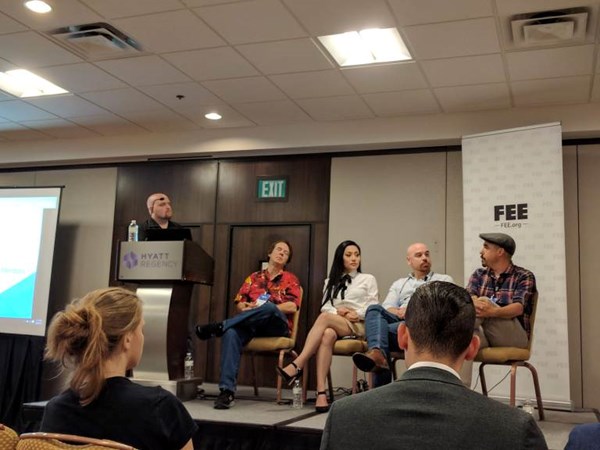 I missed cellist Tina Guo give a facemelting, bow-breaking performance earlier that day at FEEcon, so I didn’t want to miss her panel. (Here’s a bit from that performance.)

Tina, along with a Hollywood screenwriter, a Hollywood composer, and a photojournalist gave their advice and stories on feedback, mentorship, and failure in creative professions. Some key takeaways for me.

The Socialist Destruction of Venezuela

These conferences can sometimes feel a little too comfortable. We Americans have our problems, but we don’t face the same level of unfreedom common elsewhere.

The challenges of liberty that put a fire in my belly are happening abroad in places like Venezuela, which has been suffering under worsening socialist rule since the 70s. Three members of the Venezuelan opposition spoke in my next panel “The Socialist Destruction of Venezuela:” 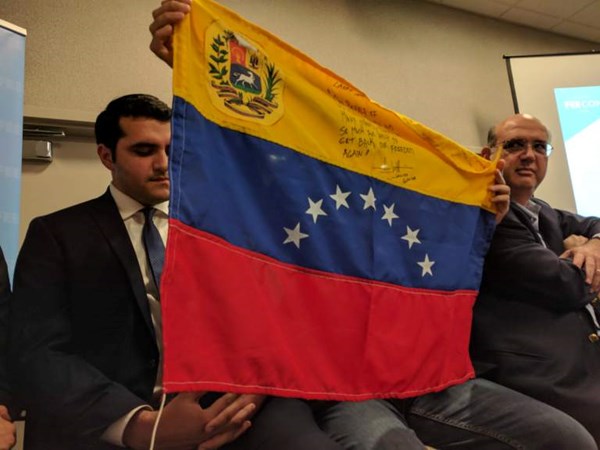 But it was also fully staffed with real bada**es, from the well-spoken young Jorge Jraissati (watch out for this guy—he’s going to do awesome things) to Luis H. Ball (who was once charged with treason and civil rebellion—wrongly, of course—for opposing Chavez) to Javier Garcia, who once obstructed the Venezuelan National Guard in the streets to protect innocents and who walked out of Venezuela to Colombia to escape to freedom.

Here are some of my key takeaways:

After that, it was back to my Praxis pals TK and Isaac for a live recording of the first episode of the second season of their excellent podcast Office Hours. 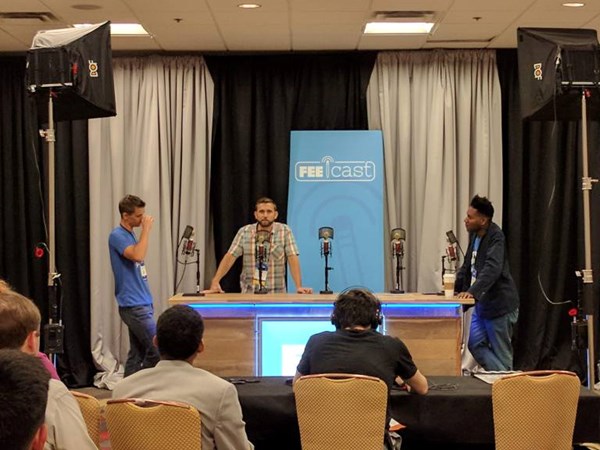 They riffed about working for free, the danger of envy, and the athletic mindset. I even got a question in (woot woot!), which prompted a guest appearance by Isaac’s brother (and my first office job boss) Levi Morehouse of Ceterus.

My emotional high of the day came from seeing young violinist Wuilly Artega play for us. Wuilly is a young Venezuelan who was detained and tortured for his role in protesting (famously, by playing violin) against the communist government ruling Venezuela. Check out his story—this guy is a true hero:

Wuilly gave FEEcon 2018 its own epic and beautiful and sad violin performance set against a backdrop of the horrible images of the destruction in Venezuela.

Happily, he got a standing ovation and an encore, including a “Viva Venezuela” from me. FEE’s President Larry Reed was presented with a Venezuelan flag by Wuilly, Jorge Jraisatti, and Javier Garcia, and (in a move of true bada**ery) predicted that a future FEE seminar—devoted to free-market principles—would one day came to Caracas: 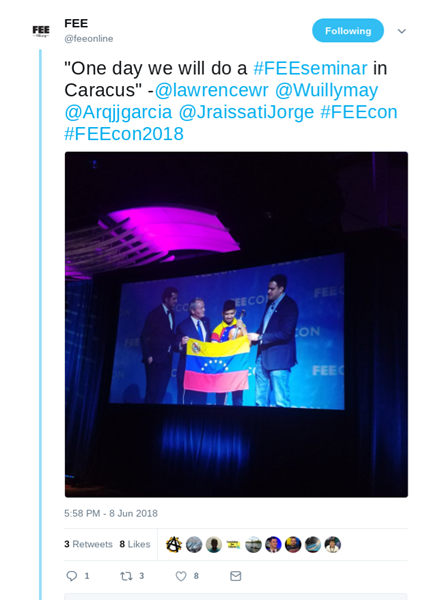 Here are some key takeaways for me:

For us economics nerds, thinking about the opportunity generated by an investment in clean water is a thing of beauty. To quote (roughly) Scott, “Imagine getting 49 hours back [per week]—just like that.” That’s the power of clean water. Consider this: 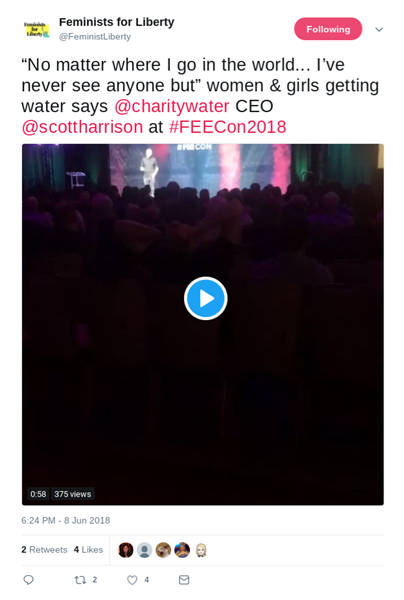 If you haven’t heard Scott’s story before, I recommend checking out one of his talks. Scott went from being a club promoter to bringing clean water to more than 8 million people around the world. Guy deserves a metal for dramatic redemptions/turnarounds.

Rounding Out the Day

I ended my day at FEEcon with a fabulously fun dance party hosted by America’s Future Foundation at the downtown Atlanta Sidebar where I hit the floor to dance with a bunch of young econ and liberty nerds from around the country and the world.

As usual, our Brazilian friends brought the best moves. We all laughed, smiled, cheered, and generally felt like a big happy family dancing at a wedding. It was something special, and it was a great way to celebrate freedom on a FEEcon 2018 Friday night.

We want to keep enjoying freedom and make the joys of freedom available to others. That’s not going to be easy, and most of us young people will be old and still going after it. So it’s worth ending with a quote which powers Scott Harrison at Charity:Water: 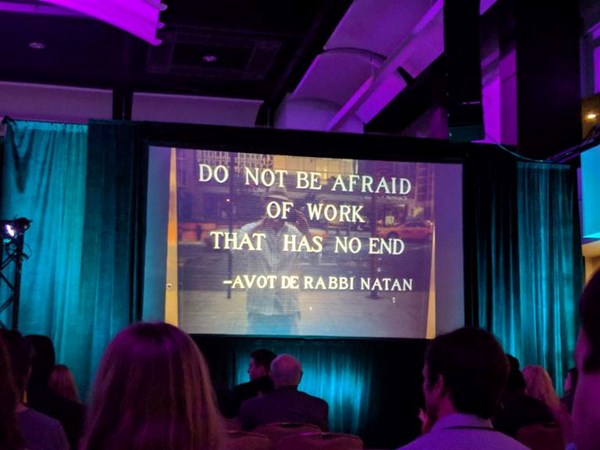