Higher Education Subsidies Are Cleaning Out Students and Enriching Bureaucrats

Government subsidies are a recipe for higher costs and inefficiency, regardless of the product or sector. 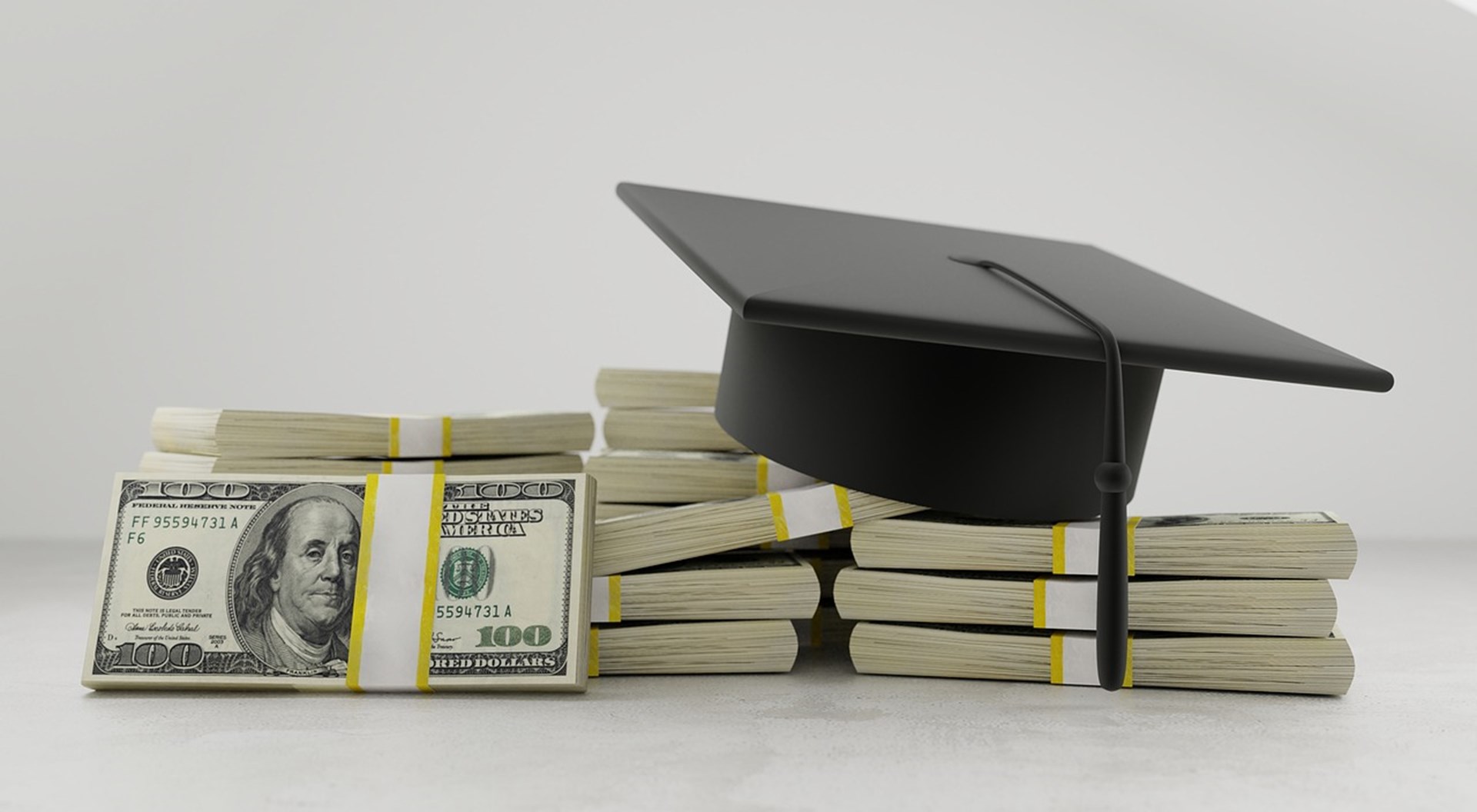 I’m not as eloquent on the issue as Professor Daniel Lin, but I recently explained on Fox Business that government subsidies for higher education have enabled big increases in tuition, an outcome that has been good for bureaucrats and bad for students.

In effect, this is simply a story of “third-party payer,” which happens when consumers get to buy something with other people’s money.

Sellers respond by increasing prices since they know that consumers won’t care as much about price.

Indeed, this is the main problem plaguing America’s health sector.

Simply stated, government subsidies are a recipe for higher costs and inefficiency, regardless of the product or sector. 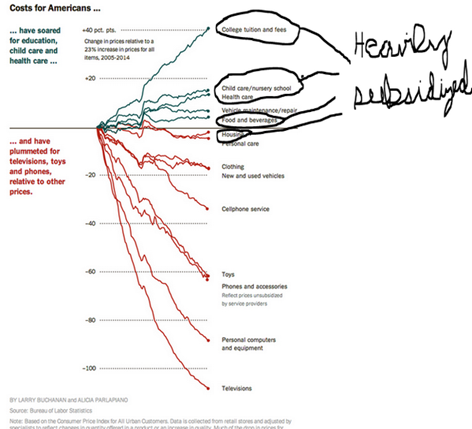 We definitely see the bad consequences in higher education. Mitch Daniels, the head of Purdue University, correctly identifies the problem of third-party payer in a column for the Washington Post:

…let’s design an economic sector guaranteed to cost too much. …we will sell a product deemed a necessity, with little or no option for the customer to avoid us altogether. Next, we will arrange to get paid for inputs, not outputs — how much we do, not how well we do it. We will make certain that actual results are difficult or impossible to measure with confidence. And we’ll layer on a pile of complex federal regulations to run up administrative costs. Then, and here’s the clincher, we will persuade the marketplace to flood our economic Eden with payments not from the user but from some third party. This will assure that the customer, insulated from true costs, will behave irrationally, often overconsuming and abandoning the consumerist judgment he practices at the grocery store or while Internet shopping. Presto! Guaranteed excessive spending, much of it staying in the pockets of the lucky producers. You say, “Oh, sure, this is American health care.” …Your answer is correct but incomplete. It worked so well in health care, we decided to repeat the formula with higher education. …by evading accountability for quality, regulating it heavily, and opening a hydrant of public subsidies in the form of government grants and loans, we have constructed another system of guaranteed overruns. It is the opposite of an accident that the only three pricing categories that have outpaced health care over recent decades are college tuition, room and board, and books.

Daniels has done a great job controlling costs at Purdue, but I’m even more impressed that he is willing to look at the problems for our entire system of higher education (as such, I’ll forgive him for being the budget director during the big-spending Bush Administration).

I especially like his solution, which, in part, would require colleges to repay taxpayers if there are loan defaults, thus ensuring that they have some skin in the game:

…a promising movement is advancing in education to put some of the risk of lousy results — students who do not graduate or who graduate without having learned enough to earn their way in the world — on the institutions that “educated” them. It is about time. This game has been skinless far too long. …even a small degree of risk-sharing in higher education would cause significant behavior change. …Even a small charge, plus the embarrassment of its public announcement, would probably jar many schools from their complacent ruts.

By the way, some people (including Paul Krugman) claim higher tuition is caused by budget cuts. Preston Cooper shared some of his research on this issue in the Wall Street Journal:

A typical student in an American public college pays thousands of dollars more in tuition than just a decade ago. Students and parents are worried and frustrated, and many point the finger at state legislators… Hillary Clinton blamed “state disinvestment” in higher education for soaring tuition and declared her support for “free college.” While the “disinvestment” narrative is simple and appealing, it collapses under scrutiny. …Tuition goes up no matter what state legislators do. Public colleges, with state boundaries insulating them from competition, and generous federal student aid programs at their disposal, charge as much as they can get away with. Changes in state funding are largely irrelevant.

Now let’s focus on the problem of ever-expanding bureaucracy.

One of the most famous essays on bureaucracy ever written was built upon a deceptively simple observation. Between 1914 and 1928, the number of ships in the British Navy declined by 67 percent. The ranks of officers and men shrank by 31 percent. But the number of Admiralty officials administering the shrunken force rose by 78 percent. …Here was the origin of Parkinson’s famous laws of bureaucracy, including “work expands to fill the time available” and “officials make work for each other.” …Why does college education cost so much? The Parkinson of American academia is Ralph Westfall, a professor at California Polytechnic University in Pomona. He computed in 2011 that over the 33 years from 1975 to 2008, the number of full-time faculty in the California state university system had barely increased at all: up from 11,614 to 12,019. Over the same period, the number of administrators had multiplied like little mushrooms: 3,000 had become 12,183. …with our universities. We’ve been thinking of them as institutions for teaching and learning—and wondering why we seem to be spending so much without achieving more. But if you think of them as institutions generating a perpetual cycle of employment in specialties for which there would otherwise be no demand at all? Why in that case, they are succeeding brilliantly.

George Will, in a column about political correctness and campus snowflakes, shares this factoid about bureaucracy in California’s higher education system:

…between the 1997-1998 academic year and the Great Recession year of 2008-2009, while the University of California student population grew 33 percent and tenure-track faculty grew 25 percent, senior administrators grew 125 percent. “The ratio of senior managers to professors climbed from 1 to 2.1 to near-parity of 1 to 1.1...”

…over the last half-century, America’s universities have slowly been taken over by a burgeoning class of administrators and staffers who are less interested in training future entrepreneurs and thinkers as they are in turning institutions of learning into cash cows for a growing academic bureaucracy. …Every year, hosts of administrators and staffers are added to university payrolls, even as budget crises force schools to shrink their full-time faculties. There are armies of functionaries – vice presidents, associate vice presidents, assistant vice presidents, provosts, associate provosts, vice provosts, assistant provosts, deans, deanlets, and deanlings, each commanding staffers and assistants. In turn, the ranks of administrators have expanded at nearly twice the rate of the faculty, while administrative staffs have outgrown the academics by nearly a factor of five. No wonder college is so expensive!

Let’s close with this bit of satire from libertarian Reddit: 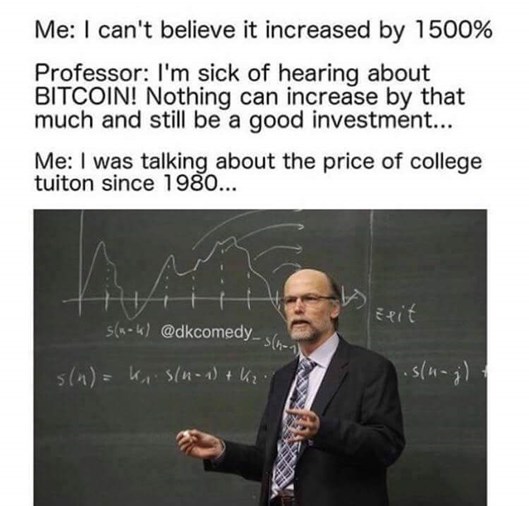