Has Brexit Boosted the British Economy?

After the Brexit referendum, there were many dire predictions for the British economy, but have any of them come true?

Forecasts of the economic consequences of Brexit are gloomy and pessimistic in the case of the Remainers, and upbeat and optimistic for the Leavers. In the Treasury report on the long-term effects of Britain leaving the European Union published in April 2016, for example, all the leave scenarios were pessimistic. The worst case scenario predicted that the average family would lose £5,200 per annum by 2030.

That said, a report published last year by economics Professor Patrick Minford, who is a prominent Leaver, claimed that GDP would be 6 percent higher as a result of Britain leaving the European Union. Clearly, the political views of forecasters have been exercising a strong influence over their predictions.

In our book Brexit: Why Britain Voted to Leave the European Union, we criticize the Treasury report on several grounds and conclude that the long-term forecasts of the consequences of Brexit were essentially meaningless. This is largely because economic futures in 10 to 15 years are unknowable.

Any long-term forecast of the consequences of Brexit is purely speculative.

The same point, however, can be made about overly optimistic forecasts that the economy will be boosted by a precise amount from Brexit. Any long-term forecast of the consequences of Brexit, whether optimistic or pessimistic, is purely speculative. Your guess is as good as ours.

Rather than making unrealistic forecasts about the consequences of Brexit, it is much better to look at what has happened to the UK economy in the 18 months since the referendum. In the words of Aneurin Bevan, the founder of the NHS: “Why gaze into the crystal ball when you can read the book?”

Measuring Economic Prosperity Before and After Brexit

We can look at key indicators of economic prosperity such as growth, employment, inflation, stock prices, and, more generally, consumer confidence and see if Brexit has had any impact on them over this period. This exercise shows that trends in growth, unemployment, and inflation remain essentially the same after the EU Referendum as they were before, reinforcing the point that some of the gloomier predictions about what would happen to the economy following the referendum have proved false.

There is one clear exception to this pattern, however; the Stock Market, which has risen faster since the referendum than it did before. This can be seen in the figure which shows the performance of the All Share Stock Market Index for the UK since 1995. It reached its highest level over this period in 2017, which tends to support optimism about Brexit rather than pessimism. But is the Stock Market a reliable indicator of the state of the economy as opposed to a measure of the psychology of investors? 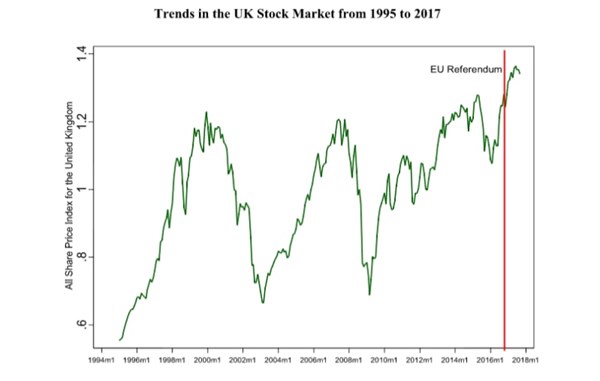 For many years the “efficient markets hypothesis” held that the current market price of shares provides an accurate picture of the future earnings from companies quoted on the exchanges, discounted to their present value. Faith in this particular theory has waned in recent years because, although there is a positive relationship between economic growth and stock prices over time, it is far from perfect.

In addition, work by the Nobel Prize-winning economist, Robert Shiller, showed that the stock market is far too volatile to reliably predict future earnings. Markets frequently get it wrong, in large part because there are so many uncertainties about our economic futures.

But we can ask a different and more important question, which is: does the Stock Market have any influence on the future of the economy? An econometric technique, known as “Granger causality” analysis, can help us answer this question. The technique is named after the late Clive Granger, another Nobel Prize-winning economist who invented it.

Brexit is turning out to be a good thing for important aspects of the British economy. So is there any evidence of stock prices influencing other economic variables over time? We examined the relationship between the Stock Market index and other economic measures using monthly data from 1974 to 2017, a total of 520 months altogether. The results show that the Stock Market “Granger causes” several variables.

If the market is buoyant, this makes people more confident about their economic futures, so it boosts consumer confidence and spending. It also affects the exchange rate by making the value of the pound rise relative to the dollar. In addition, it encourages inflation and lowers unemployment, again after a period of time. On balance, rising stock prices tend to be good for our economic futures, although there are also some negatives.

The volatility of the stock market, well-illustrated in the figure above, means that we can’t be sure that the rise in the market seen at the end of 2017 will continue into 2018. There may be a sharp reversal in the future if some unforeseen event turns the market around.

But what we can say at the start of the New Year is that so far, Brexit is turning out to be a good thing for important aspects of the British economy.