Gun Control Advocates Are Finally Admitting What They Really Want

Former Supreme Court Justice John Paul Stevens finally says what others think: that the 2nd Amendment should be repealed.

But I’m nonetheless a big supporter of private gun ownership. In part, this is because I have a libertarian belief in civil liberties. In other words, my default assumption is that people should have freedom (the notion of “negative liberty“), whereas many folks on the left have a default assumption that the state should determine what’s allowed. 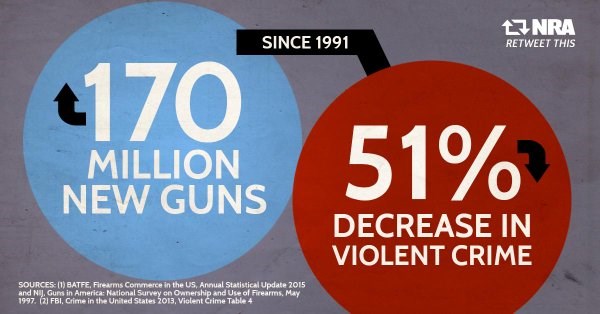 I also support private gun ownership because I want a safer society. Criminals and other bad people are less likely to engage in mayhem if they know potential victims can defend themselves. And I also think that there’s a greater-than-zero chance that bad government policy eventually will lead to periodic breakdowns of civil society, in which case gun owners will be the last line of defense for law and order.

I’m sometimes asked, though, whether supporters of the 2nd Amendment are too rigid. Shouldn’t the NRA and other groups support proposals for “common-sense gun safety”?

Some of these gun-control ideas may even sound reasonable, but they all suffer from a common flaw. None of them would disarm criminals or reduce gun crime. And I’ve detected a very troubling pattern, namely that when you explain why these schemes won’t work, the knee-jerk response from the anti-gun crowd is that we then need greater levels of control. Indeed, if you press them on the issue, they’ll often admit that their real goal is gun confiscation.

Though most folks in leadership positions on the left are crafty enough that they try to hide this extreme view.

So that’s why—in a perverse way—I want to applaud John Paul Stevens, the former Supreme Court Justice, for his column in the New York Times that openly and explicitly argues for the repeal of the 2nd Amendment.

…demonstrators should…demand a repeal of the Second Amendment. …that amendment…is a relic of the 18th century. …to get rid of the Second Amendment would be simple and would do more to weaken the N.R.A.’s ability to stymie legislative debate and block constructive gun control legislation than any other available option. …That simple but dramatic action would…eliminate the only legal rule that protects sellers of firearms in the United States.

The reason I’m semi-applauding Stevens is that he’s an honest leftist. He’s bluntly urging that we jettison part of the Bill of Rights.

Many—if not most—people on the left want that outcome. And a growing number of them are coming out of the pro-confiscation closet. In an article for Commentary, Noah Rothman links to several articles urging repeal of the 2nd Amendment.

They’re talking about repealing the Second Amendment. It started with former Supreme Court Justice John Paul Stevens and George Washington University Law Professor Jonathan Turley. …Turley and Stevens were joined this week by op-ed writers in the pages of Esquire and the Seattle Times. Democratic candidates for federal office have even enlisted in the ranks of those calling for an amendment to curtail the freedoms in the Bill of Rights. …anti-Second Amendment themes…have been expressed unashamedly for years, from liberal activists like Michael Moore to conservative opinion writers at the New York Times. Those calling for the repeal of the right to bear arms today are only echoing similar calls made years ago in venues ranging from Rolling Stone, MSNBC, and Vanity Fair to the Jesuit publication America Magazine.

But others on the left prefer to hide their views on the issue.

Indeed, they even want to hide the views of their fellow travelers. Chris Cuomo, who has a show on MSNBC, preposterously asserted that nobody supports repeal of the 2nd Amendment. 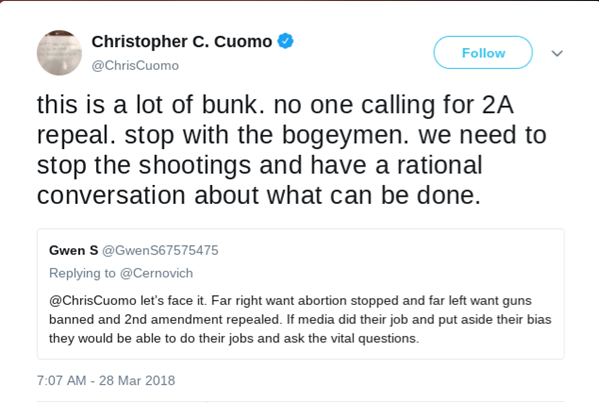 It’s also worth noting that Justice Stevens got scolded by a gun-control advocate at the Washington Post.

One of the biggest threats to the recovery of the Democratic Party these days is overreach. …But rarely do we see such an unhelpful, untimely and fanciful idea as the one put forward by retired Supreme Court justice John Paul Stevens. …Stevens calls for a repeal of the Second Amendment. The move might as well be considered an in-kind contribution to the National Rifle Association, to Republicans’ efforts to keep the House and Senate in 2018, and to President Trump’s 2020 reelection bid. In one fell swoop, Stevens has lent credence to the talking point that the left really just wants to get rid of gun ownership. …This is exactly the kind of thing that motivates the right and signals to working-class swing voters that perhaps the Democratic Party and the political left doesn’t really get them.

The bottom line is that the left’s ultimate goal is gutting the 2nd Amendment. Not much doubt of that, even if some leftists are politically savvy enough to understand that their extremist policy is politically suicidal.

But let’s set aside the politics and look at the legal issues. There’s another reason why I’m perversely happy about the Stevens op-ed. Even though he was on the wrong side of the case, he effectively admits that the 2008 Heller decision enshrined and upheld the individual right to own firearms.

And the five Justices who out-voted Stevens made the right decision. I’m not a legal expert, so I’ll simply cite some people who are very competent to discuss the issue. Starting with what Damon Root wrote for Reason.

Though the real hero of this story is probably Joyce Lee Malcolm, the scholar whose work was instrumental in producing the Heller decision. John Miller explains for National Review.

Malcolm looks nothing like a hardened veteran of the gun-control wars. Small, slender, and bookish, she’s a wisp of a woman who enjoys plunging into archives and sitting through panel discussions at academic conferences. Her favorite topic is 17th- and 18th-century Anglo-American history… She doesn’t belong to the National Rifle Association, nor does she hunt. …She is also the lady who saved the Second Amendment—a scholar whose work helped make possible the Supreme Court’s landmark Heller decision, which in 2008 recognized an individual right to possess a firearm.

For her dissertation, she moved to Oxford and Cambridge, with children in tow. …Malcolm’s doctoral dissertation focused on King Charles I and the problem of loyalty in the 1640s… The Royal Historical Society published her first book.

But her subsequent research uncovered some fascinating insights about the right to keep and bear arms.

At a time when armies were marching around England, ordinary people became anxious about surrendering guns. Then, in 1689, the English Bill of Rights responded by granting Protestants the right to “have Arms for their Defence.” Malcolm wasn’t the first person to notice this, of course, but as an American who had studied political loyalty in England, she approached the topic from a fresh angle. “The English felt a need to put this in writing because the king had been disarming his political opponents,” she says. “This is the origin of our Second Amendment. It’s an individual right.” …Fellowships allowed her to pursue her interest in how the right to bear arms migrated across the ocean and took root in colonial America. “The subject hadn’t been done from the English side because it’s an American question, and American constitutional scholars didn’t know the English material very well,” she says. …The Second Amendment, she insisted, recognizes an individual right to gun ownership as an essential feature of limited government. In her book’s preface, she called this the “least understood of those liberties secured by Englishmen and bequeathed to their American colonists.”

And it turns out that careful scholarship can produce profound results.

…in 2008, came Heller, arguably the most important gun-rights case in U.S. history. A 5–4 decision written by Scalia and citing Malcolm three times, it swept away the claims of gun-control theorists and declared that Americans enjoy an individual right to gun ownership. “…it gave us this substantial right.” She remembers a thought from the day the Court ruled: “If I have done nothing else my whole life, I have accomplished something important.” …the right to bear arms will not be infringed—thanks in part to the pioneering scholarship of Joyce Lee Malcolm.

Let’s close with a video from Prager University, narrated by Eugene Volokh, a law professor at UCLA. He explains the legal and historical meaning of the 2nd Amendment.

In other words, the bottom line is that the Justice Stevens op-ed and other honest leftists are right. The 2nd Amendment would need to be repealed in order to impose meaningful gun control.

And I suppose it’s also worth mentioning that it won’t be easy to ban and confiscate guns if they ever succeeded in weakening the Bill of Rights. But hopefully, we’ll never get to that stage.