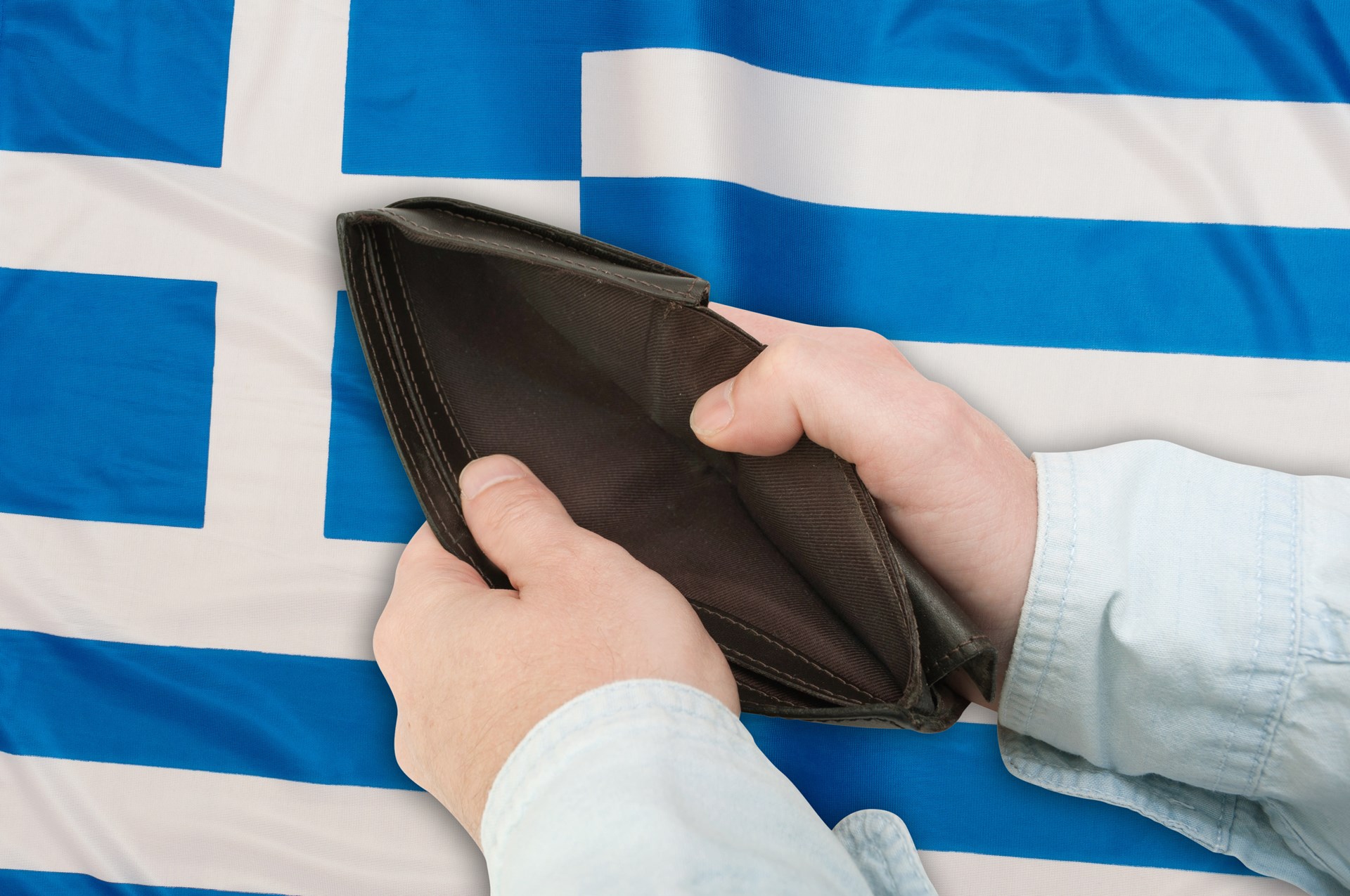 Shortly after the fiscal crisis began in Greece, I explained that the country got in trouble because of too much government spending. 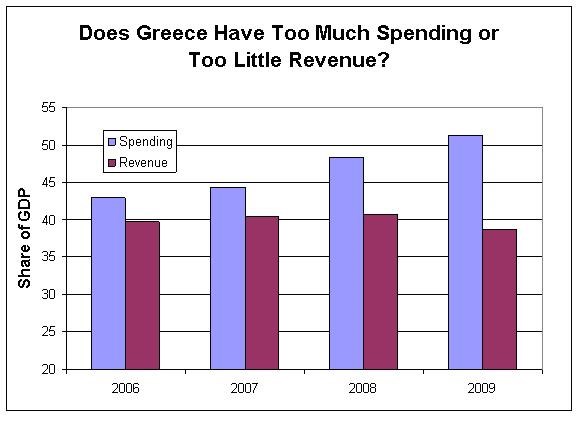 More specifically, I pointed out that the country was violating my Golden Rule, which meant that the burden of spending was rising relative to the private economy.

That’s a recipe for trouble.

Unfortunately, thanks in large part to bad advice from the International Monetary Fund, Greek politicians decided to deal with an overspending problem by raising taxes.

Then doing it again.

And raising taxes some more.

And raising them again.

The tax burden is now so stifling that even the IMF admits the country may be on the wrong side of the Laffer Curve.

And establishment media sources are noticing. Here are some excerpts from a report in the Wall Street Journal.

Greece is…raising taxes so high that they are strangling the small businesses that form the backbone of its economy. …The tax increases have left Greece with some of Europe’s highest tax rates across several categories, including 29% on corporate income, 15% on dividends, and 24% on value-added tax (a rough equivalent of U.S. sales tax). Individuals pay as much as 45% income tax, plus an extra “solidarity levy” of up to 10%. Furthermore, workers and employers pay social-security levies of up to 27% of their salaries. …small and midsize businesses and self-employed people…are fighting the government in court over having to pay what they say is up to 80% of their average monthly takings in taxes and levies. Some also have to pay retroactive social-security contributions, to the point where professional associations say some of their members are having to pay more to the state than they make.

Paying more than they make? Francois Hollande will applaud when he learns that another nation has an Obama-style flat tax.

…economists and Greek entrepreneurs say heavy taxation doesn’t help. The tax burden is considered the most problematic factor for doing business in Greece, according to the World Economic Forum. “The tax burden creates a serious disincentive for economic activity. It mainly hits the most productive part of the Greek society… Aris Kefalogiannis, the CEO of olive-oil and food company Gaea, said the fiscal straitjacket is keeping highly qualified executives he would like to hire from coming to Greece. It has also made him more sparing with investments. …“But this abusive taxation is not backed by any actual reforms that would make the state efficient.”

Of course the state hasn’t been made more efficient. Why would politicians shrink government if higher taxes are an option?

It’s not as if Greek voters are poised to elect a Ronald Reagan or Margaret Thatcher, after all.

In any event, all of the tax increases are having predictably bad effects.

Tax evasion has led to higher tax rates on those Greeks who can’t or won’t evade taxes. The so-called gray economy is estimated at 26.5% of GDP… “Overtaxation is a vicious circle, which is not fixing the problem,” said 40-year-old electrician Antonis Alevizakis. “Only a third of customers want a receipt. The incentive to avoid a 24% value-added tax surcharge is big for them.” …More than 100,000 self-employed professionals have closed their businesses since mid-2016, to avoid rising taxation and social-security contributions, according to Finance Ministry data. Some of these people stopped self-employment, while others turned to the gray economy. …tax consultant Chrysoula Galiatsatou said. “A financially active part of the population sees no reason to try to do more.”

Why “try to do more” when the government gets the lion’s share of any additional income?

And why even stay in the country when there are better (less worse) tax systems in neighboring nations? Indeed, Greece is one of the few nations to raise corporate tax rates as the rest of the world is taking the opposite approach. 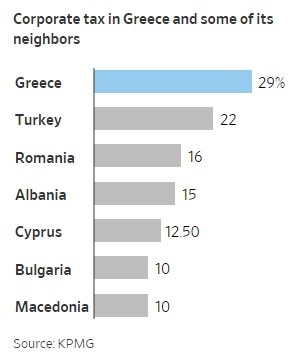 Here are some of the details. It appears that Bulgaria is a preferred destination for tax exiles.

Greece’s direct competitors for investment in its poorer, southeastern region of Europe have much lower taxes. For that reason, many Greek businesses and professionals are migrating to neighboring countries such as Bulgaria and Cyprus. …Around 15,000 Greek companies are registered in Bulgaria. Greece’s Finance Ministry estimates that 80% of them have a registration number but no activity in Bulgaria, and are only there to avoid Greek taxes. “If I stayed in Greece I would most certainly be in jail by now,” said John Douvis, who used his remaining savings in 2015 to move his family’s furniture factory from Athens to Blagoevgrad in Bulgaria. In Greece, he said, “it’s almost impossible for a company to survive unless it evades tax.”

In other words, the problem is tax rates, not tax evasion.

Lower the rates and evasion falls.

Let’s wrap up today’s column with a final observation. The WSJ story states that there have been spending cuts in addition to tax increases.

That’s basically true, but the net effect of the Greek fiscal crisis is that government has become a bigger burden relative to private economic output. Here’s a chart, based on data from the IMF. 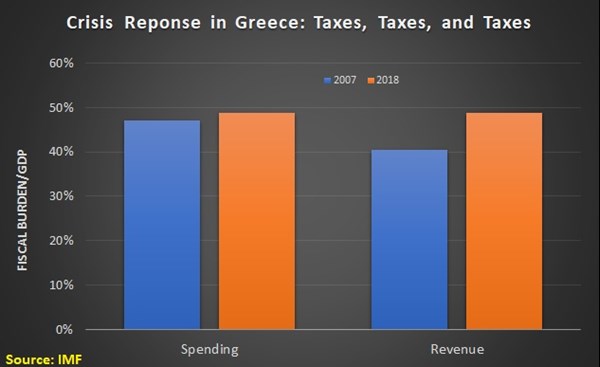 The bottom line is that Greek politicians did way too much spending last decade and now they’re augmenting that mistake with way too much taxing this decade.

P.S. To reward everyone who read to the end, here’s some Greek-related humor.

This cartoon is quite good, but this one is my favorite. And the final cartoon in this post also has a Greek theme.

We also have a couple of videos. The first one features a video about…well, I’m not sure, but we’ll call it a European romantic comedy and the second one features a Greek comic pontificating about Germany.

Last but not least, here are some very un-PC maps of how various peoples—including the Greeks—view different European nations. Speaking of stereotypes, the Greeks are in a tight race with the Italians and Germans for being considered untrustworthy.

P.P.S. If you want some unintentional humor, did you know that Greece subsidizes pedophiles and requires stool samples to set up online companies?