I have to admit that sometimes it’s fun to watch conspiracy theory shows and documentaries on Netflix. However, the problem arises when those theories become doctrine and affect political life.

This is what has happened with globalization and the whole myth behind it. The rejection of globalization is now common to both right- and left-wing politicians for different reasons, from President Trump, who has seemingly suggested we lock up ‘’globalists” such as George Soros, to Bernie Sanders, who believes “we need to fundamentally reject our 'free trade' policies.”

The Myth of Globalization

One the one hand, there are those who focus more on the social aspect of globalization and think of it as an ideology. To them, it is an evil plan pushed by nebulous, powerful people that will lead to the absence of national identity, mass immigration, and some form of one-world government. That’s why they use the term globalism, instead. As President Trump mentioned in his speech at the UN, ‘’We reject the ideology of globalism and accept the doctrine of patriotism.”

This narrative is also popular in Europe, with the prime minister of Hungary, Viktor Orban, naming George Soros as an enemy of his country, blaming him for sponsoring the reception of thousands of refugees into Europe. He has even passed anti-immigrant laws called “Stop Soros.” Both of these approaches, despite their different rationales, miss the point of globalization entirely.The refugees entering the country are not just considered a threat to national identity, but they are also blamed for ‘’stealing’’ jobs from natives.

The left, however much they may stand for the immigrants targeted by anti-globalists, aren’t necessarily pro-globalization by any means. In contrast, they oppose economic globalization, calling it a ‘’neoliberal’’ policy promoted by the greedy capitalists. For them, globalization is beneficial only for national elites and private corporations; it leads to inequality and, like every capitalist policy, to the exploitation of workers.

Both of these approaches, despite their different rationales, miss the point of globalization entirely.

Globalization Is an Outcome of Freedom

Wikipedia defines globalization as ‘’the process of interaction and integration among people, companies, and governments worldwide.” In other words, globalization is what happens when you let people be free to interact with each other on a global scale. It is a result of freedom, not political force. This is why it’s wrong to consider it an ideology rather than a simple process.

Conspiracy theories about George Soros or the New World Order are, frankly, not even worth commenting upon. But what about those criticisms of globalization that are more grounded in reality?

Some are still skeptical of the benefits of globalization. Some believe that only the very rich benefit from it.

Criticism of economic globalization often translates into criticism of the free movement of goods, services, technologies, and capital. Since 1990, thanks to a resurgence of globalization and the dominance of capitalism, “more than a billion people have lifted themselves out of extreme poverty and the global poverty rate is now lower than it has ever been in recorded history,” according to the World Bank.

A paper by Branko Milanovic on global inequality offers a great explanation on the winners and losers of globalization between 1988 and 2008.

As the figure shows, it is indeed among the very top of the global income distribution and among the “emerging global middle class”, which includes more than a third of world population, that we find most significant increases in per capita income. (...) These two groups—the global top 1% and the middle classes of the emerging market economies— are indeed the main winners of globalization.

The only exception is the poorest 5% of the population whose real incomes have remained the same. It is this income increase at the bottom of the global pyramid that has allowed the proportion of what the World Bank calls the absolute poor (people whose per capita income is less than 1.25 PPP dollars per day) to go down from 44% to 23% over approximately the same 20 years.

But the biggest losers (other than the very poorest 5%), or at least the “non-winners,” of globalization were those between the 75th and 90th percentiles of the global income distribution whose real income gains were essentially nil. 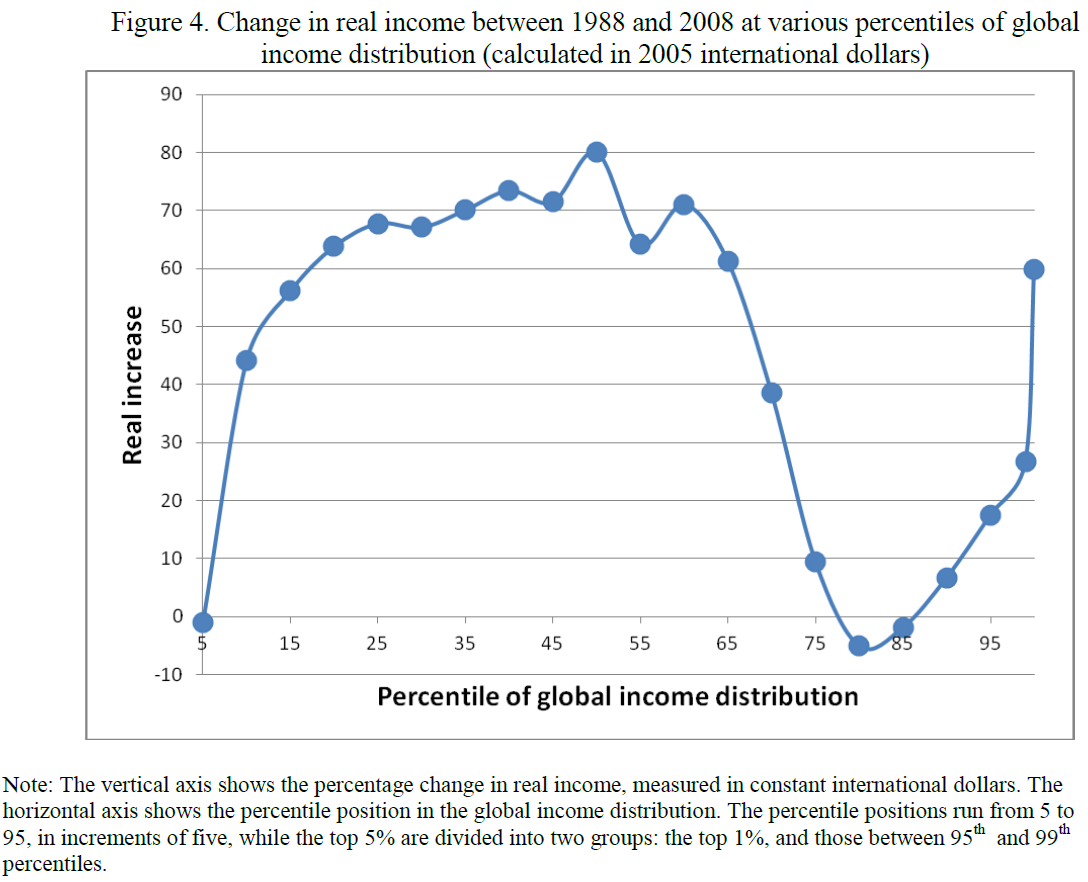 The winners of globalization are the global top one percent and the middle classes of the emerging market economies, which make up more than two billion people. Although the poorest five percent of the population have seen their real incomes stay the same, the biggest loser is the global upper-middle class.

You can’t ignore the lowest global poverty rate ever recorded just because the rich are getting richer, too.

For someone who only perceives robber barons and wealthy oppressors and ignores the most productive people in society, these figures might seem meaningless. But you can’t ignore the lowest global poverty rate ever recorded just because the rich are getting richer, too.

Humans have lived most of their existence in poverty. The question we have to ask ourselves is not what makes people poor but what makes them rich. Only now, after thousands of years of horrible living conditions and unmovingly slow growth, can we see millions escaping poverty under the globalized economy. It’s not a world of angels and saints, but it is by far the best we've ever had.