From Violence to Reason: An Insider's Account of the Arab Spring

We had to liberate the Muslim mind from the shackles of dogma. We had to bring back Reason. 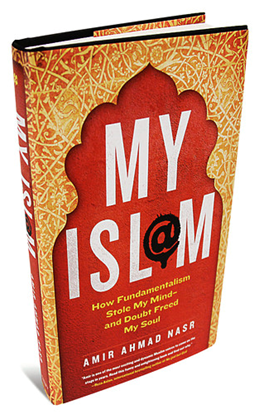 If you're looking to understand Islam and its adherents, this book is a must-read. The subtitle is How Fundamentalism Stole My Mind - And Doubt Freed My Soul. And it is an exciting intellectual journey, a story of how a young man growing up in a liberal Muslim family started questioning his faith and his society, found freedom through the internet, and was part of the international blogging community that brought about the Arab Spring, toppling dictatorships across the Arab world.

It is a story of intellectual openness and a spirit of curiosity and inquiry. Few people question the beliefs they are born into with any sort of rigor. Most ideas are absorbed by osmosis. To find someone of the intellectual courage that Amir displays is rare.

He starts with his childhood. As a six year old he has questions about the Egyptian soap opera his mom is watching on TV. A man had smacked down a woman to the floor, shouting, "You're divorced. Divorced. Divorced."

"Why did he hit her?" he asked. "Not now," his mother replied, avoiding the subject. Finally she tells him the man got angry at his wife and divorced her. When a man is displeased with his wife, he tells her she's divorced. But there is hope for reconciliation. If he says it twice, the situation is more serious. But if he says it three times, the marriage is over.

At age eleven he hoped to die as a martyr for Islam.

It is a fitting beginning to the story because Amir grows up loving Islam. He finds great comfort in its rituals and teachings. He alludes to it as his beloved, his sweetheart. But as his story continues, he becomes seduced by another - Doubt. And then he flirts with Atheism. And eventually there is a Messy Divorce. And then he discovers a Three Eyed Beauty.

His was a love-hate relationship with Islam. Some aspects he loved and some he hated. But he "believed without questioning". He was a brilliant student, memorizing long passages of the Qur'an and winning recital competitions. "I became wary of non-Muslims," he writes. "I hated Jews, hated secularism, and doubted democracy. I had a love-hate relationship with the West and its leader, the 'Big Satan', the United States of America."

At age eleven he hoped to die as a martyr for Islam.

A Search for Truth

The rest of the story is how he left that behind. As Amir puts it, it is about "the search for identity, meaning, and ultimately, Truth."

Amir Ahmad Nasr was born in the Sudan. Shortly after his birth his parents took him to Qatar to escape the turmoil in the land of his birth. He had a comfortable middle-class upbringing. His father had a Ph.D. from the University of Wisconsin-Madison. His parents liked America. But they were devout Muslims and young Amir went to religious schools. He describes his religious training in considerable detail - the orthodoxy, the demonization of Israel and Jews, the call to Jihad.

In the late 1990s when he was in his mid-teens, the family moved to Kuala Lumpur, Malaysia. Malaysia is a cosmopolitan, multicultural country and fairly Westernized and liberal compared to Qatar. Amir was enrolled in a British style international school. He asked his mom if he could be friends with all the non-Muslim kids in the school. It seemed strange to him. He had been taught to distrust infidels in his religious school in Qatar.

"What sort of nonsense were they teaching you?" she asks, flabbergasted. She had no idea of the orthodoxy that had been drilled into him. "There's no issue or problem being friends with Christians and non-Muslims. Don't let such empty talk affect you."

He became what some noted sociologists called a "third-culture kid", "a youngster struggling to assimilate elements of my parent's culture and other cultures in which I was immersed into a third colorful culture of my own. I was straddling East and West."

Then his parents moved to a home closer to his father's work and he and his sister were enrolled in another international school. But this one was founded  by "an American Arab Muslim who advocated the Islamization of knowledge." He despised the school and its regimentation. Like fundamentalist Christians, they were taught that evolution did not apply to people. Sexual repression was emphasized. And political rants were common among the teachers.

One of his teachers preached hellfire....thoughts of fornication would lead to his penis being bitten repeatedly by a large snake in hell. His mother told him such ideas were lunacy and he felt better.

How did Islamdom lose her virtue? She forgot the importance of reason.

An encounter with a religious bully has him tell the thug, "Mind your own business." Young Amir becomes ever more assertive of his independence. Then 9/11 happened.

In 2003 he started in university studying business and information technology. And he discovered the blogosphere. He discovered many dissident Arab youth, disenchanted with religious orthodoxy, disenchanted with political repression. Bloggers who often blogged anonymously with pseudonyms like "The Big Pharaoh". The Big Pharaoh blogged about "women's rights, sex, Islam, democracy, terrorism". And they were in English. The ideas were "irreverent, unique, fresh, and unthinkably heretical". There were women bloggers too who "bombarded the patriarchal norms of their society".

Amir started his own blog, The Sudanese Thinker, under the pen name of Drima. He became totally immersed in the world of liberal Arab bloggers - bloggers slagging Islamic and political tyranny. And he discovered Israeli bloggers - a diverse bunch. He discovered that Jews weren't all demons. That many were even critical of their own government.

Amir went to study in the United States and discovered the American blogosphere - the conservative and anti-Islamic blogosphere and the libertarian blogosphere.

Over this period his faith became shattered. He sought to understand the nastier repressive elements in Islam and discovered that there were once two contrarian Islamic traditions - the Mecca and the Medina verses. And two contrary philosophical offshoots - the Ash'ariyya and the Mu'tazila. The latter were a rationalist group that "held philosophy in high esteem, emphasized free will, and believed that the interpretation of the Qur'an and the Hadith are subordinate to human reason". The former group were traditionalists "emphasized predestination, were more literalist in their interpretation of the Qu'ran, and insisted that reason should be subordinate and subservient to revelation".

The rationalists ushered in an "Islamic Golden Age - a period of science, progress, and discovery, which affirmed independent reasoning and empiricism".  This is the golden age that Rose Wilder Lane refers to as The Second Attempt at freedom in The Discovery of Freedom, an effort that ultimately came to an end as Ash'ariyya took ascendancy and remains in control to this day.

"How did Islamdom lose her virtue?" asks Nasr. "Simply, she forgot the importance of reason."

It's at this point that Amir discovers "the Four Horsemen of the New Atheism - Sam Harris, Daniel Dennett, Christopher Hitchens, and Richard Dawkins". He quotes Thomas Jefferson's injunction to "Question with boldness even the existence of a God, because, if there be one, he must approve of the homage of reason, than that of blind-folded fear".

The dedication of these bloggers in the intellectual war for freedom is nothing short of inspiring.

Nasr goes on to discuss his flirtation with atheism and his eventual discovery of a third way, the three-eyed beauty, he calls it. This is derived from his reading of The Marriage of Sense and Soul: Integrating Science and Religion by Ken Wilber. Basically Wilber argues that there are three ways of seeing the world, all empirical - the eye of flesh which perceives the external world, the eye of mind which perceives things like mathematical truths, and the eye of contemplation which perceives spiritual truth. This leads Amir to the Islamic practice of Sufi - an individualist approach to religion that has no relation to organized religion. It is a non-institutional approach.

The final section deals with the Arab Spring - how the self-immolation of a 26 year old Tunisian man named Mohamed Bouazizi led to a revolution in Tunisia and throughout the Arab world. A revolution fuelled largely by the liberal Arab blogosphere. It is an astounding story told from a first person perspective.

I have touched briefly on the general thrust of this book, but it is, in my opinion, a must read for anyone wanting to gain an inside knowledge of Islam, how it ticks, and what needs to be done to eradicate its fundamentalists and bring back the religion of reason and science it once was. And what needs to be done is not to bomb the Arab world back into the stone age. What needs to be done is to support the subversive liberal intelligentsia like Amir and his fellow bloggers. Nothing short of an intellectual revolution will change the Islamic world. A revolution that is in the making and offers great hope for our troubled world.

The book is also a testament to the power of the Internet - the power of open and free communication. The dedication of these bloggers, these foot soldiers in the intellectual war for freedom is nothing short of inspiring. Read this book!