Freedom — Not Foreign Aid — Is the Solution to Global Poverty

Economic freedom is the proven escape hatch from an otherwise never-ending loop of intergenerational poverty.

The 2018 Index of Economic Freedom, an annual study that ranks 180 countries for their economic freedom using hard data, has now been published by The Heritage Foundation.

The results, when combined with poverty data from the World Bank, show that inhabitants of countries who enjoy high levels of economic freedom are far less likely to suffer from abject poverty.

In fact, as seen in the chart, which reflects the 122 countries for which recent data on poverty is available, inhabitants of countries most lacking in economic freedom are about 30 times more likely to subsist on less than $1.90 per day than people in countries where people are most economically free. 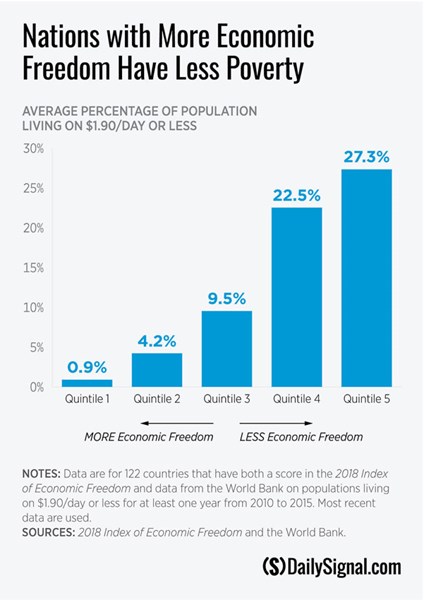 Aid as a Weapon

This finding should not be overlooked when organizations like the International Monetary Fund or the World Bank plan aid for developing countries. Such aid too often ignores economic freedom violations by despots, dictators, and autocrats.

Strongmen who disregard property rights or the rule of law to remain in power have been rewarded with billions of dollars in foreign aid from rich countries for decades. Despots and dictators have often used this aid to solidify their grips on power, for example by withholding food aid from groups that do not support them.

This injustice continues in places where foreign aid is disseminated without regard to the rule of law and economic freedom.

These strongmen and dictators often take credit for bringing foreign aid to their countries while depriving their country’s people of the economic freedom they would need to end the dependence on foreign aid.

William Easterly, in his book The Tyranny of Experts, explains how this has occurred at different times since the beginning of the 20th century, producing violent consequences in countries like China, Columbia, Ethiopia, and Sudan, among others. This injustice continues in places where foreign aid is disseminated without regard to the rule of law and economic freedom.

Those who give development funds to foreign countries should focus on securing individual rights and economic freedom for people, not on distributing supplies through the political machines of despots and dictators.

Economic freedom — not financial aid — is the proven escape hatch from an otherwise never-ending loop of intergenerational poverty.