Jobs, on net, don't get destroyed by free trade and competition.

The economic argument for free international trade is basically that people produce in order to consume, not the other way around, so the economic system should be geared to the benefit of the consumer, not the producer. In the economic sense, producers include workers and owners of capital or land, who often join in associations called "firms." There are more consumers than producers, as everybody is a consumer but not everybody is a producer; some live off the production of parents, donors, or taxpayers. So there are more consumers than producers; but this is not the important point.

Even assuming that the number of jobs is a good indication of welfare, the populist objection is not valid. That free trade would have net benefits is not surprising in light of the theory of comparative advantage, due to 19th-century economist David Ricardo. If two countries - that is, all producers in the two countries - produce what they are most efficient at, the total volume of goods available for exchange and consumption will be larger.

A popular objection to these economic arguments is that a consumer cannot benefit from lower prices if he does not have a job. Since free trade destroys jobs, it cannot be said to help consumers in general. You can't consume if you lose your job - or you have to consume less by getting a lower paying job or relying on transfers, public (unemployment insurance, social welfare, and such) or private (help from family or charity). Let me call this the "populist" objection to free trade.

A first reply is that availability of jobs is a symptom, not the cause, of prosperity. If jobs were the cause of prosperity, banning agricultural technology would generate much prosperity by dramatically increasing employment in that sector. Nearly 12 million Americans worked in agriculture in 1910 (the year when agricultural employment reached its peak) while they number less than 2.5 million today (for a population three times as large). In the meantime, the total number of jobs in the American economy increased from 37 to 151 million. We should beware of the obsession of job creation, especially by government edict.

Even assuming that the number of jobs is a good indication of welfare, the populist objection is not valid. Although some workers can, like other producers, be harmed by competition, free trade does not destroy net jobs. At least as many new jobs appear as old ones disappear.

Consider the example of manufacturing. The number of jobs in American manufacturing dropped from its peak of 19 million in 1979 to 12 million today. Most recent job losses in manufacturing come more from the impact of technological progress than from import competition; economists Michael J. Hicks and Srikant Devaraj estimate that international trade accounts for only 13% of these losses. And - this is the important point - while manufacturing employment was decreasing, total employment in the economy increased from 99 to 151 million between 1979 and today, for a net creation of 52 million jobs. In the meantime, and this is the really important point, GDP per capita (the most comprehensive measure of the standard of living) increased by 79%.

Another way to approach the populist objection that free trade destroys jobs is to observe that the main factor in employment is population growth. Employment naturally grows in line with population. Every new worker who arrives on the labor market creates his own job in the very real sense that he spends as much as he earns (or the rest is invested, creating jobs too); indeed, it is precisely in order to spend an equivalent amount that he starts working and earning an income (a reflection of Say's law, recently featured in The Economist). The new worker creates his own job by creating another one elsewhere in the economy through his own consumption.

The figure below illustrates the general point by showing the level of civilian employment in relation to the American working-age population (15 to 64 years of age) over the past half-century. Each dot on the chart represents one year. Observe how closely employment growth tracks population growth. A simple regression analysis confirms the visual impression: the coefficient of correlation is 0.992 and is highly statistically significant (at a level of significance much lower than 1%). Because the working population increases with time, the horizontal axis nearly coincides with the chronological order. The drop in the employment towards the end of the curve corresponds to the 2008-2009 recession and the slow recovery that followed. 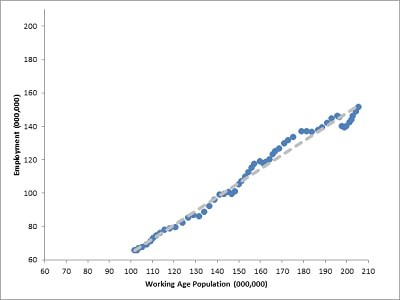 We thus have both a straightforward economic argument and empirical evidence to the effect that economic freedom in general and foreign trade, in particular, do not destroy net jobs in the economy. The number of jobs moves with the number of people who want to work, barring regulatory obstacles created by government.

Reprinted from the Library of Economics & Liberty