At first glance, the French yellow vests and American Tea Party seem quite similar, but once you look closely, the resemblance disappears. 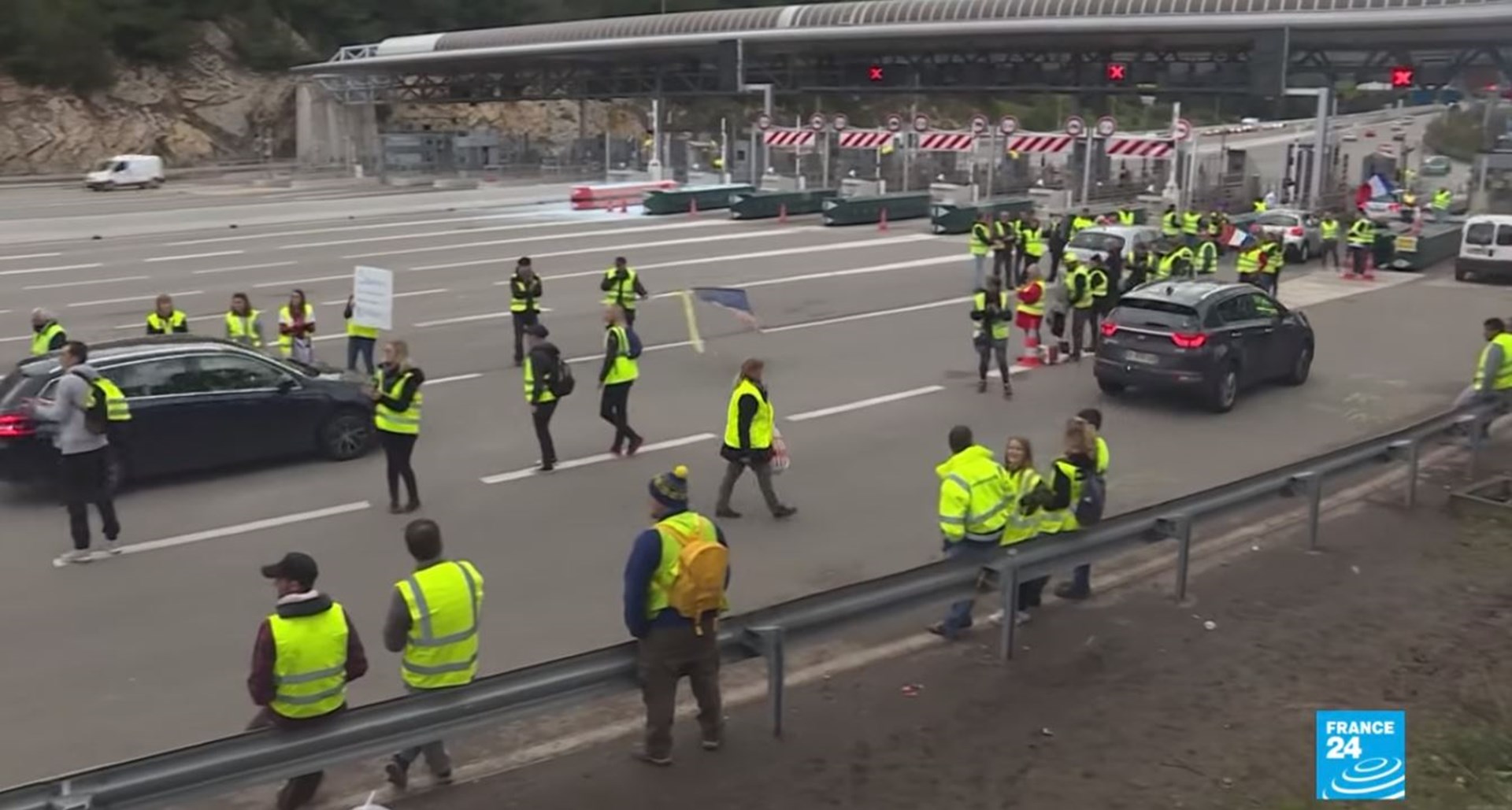 France is seeing large-scale protests against massive hikes in petrol prices, sparked by tax increases. Is the anti-tax uprising sustainable or bound to disappear?

In an effort to make its case on climate change, the government under French president Emmanuel Macron has significantly increased the TICPE, an acronym which stands for "interior tax on the consumption of energy products." An increase of up to 12 percent is supposed to curb CO2 emissions and get the country on target to fulfill its objectives, set out in the Paris Climate Accord (which the United States has pulled out of under President Trump).

Protest marches often occur on motorways, where the yellow vests block the streets to get attention for their cause.

Petrol prices in the République, which were already much higher than in its neighboring countries, skyrocketed despite the current level of cheap oil. On a website set up by the French government in an effort to help consumers compare prices, this becomes very visible: in the Paris region, a liter of petrol can cost up to €1.90 ($2.15). For my American friends who may be less familiar with the metric system, that’s $8.13 per gallon.

As a result, the gilets jaunes (yellow vests) arose out of civil society. They aren't associated with any political party, but they are surely angry, contesting sky-high taxation in France, and the political class is unwilling to listen to them. Protest marches often occur on motorways, where the yellow vests block the streets to get attention for their cause. The high-visibility security vests they wear are symbolic for a cry for help and a desperate attempt to gain attention. However, unannounced protests on motorways also had their price: one woman was killed, and hundreds injured in protests that were held on motorways not closed down by police.

Some protests have turned violent in city centers, where particularly large crowds are clashing with police forces.

“We shouldn’t underestimate the impact of these images of the Champs-Élysées [...] with battle scenes that were broadcast by the media in France and abroad,” government spokesman Benjamin Griveaux told a news briefing. “Behind this anger there is obviously something deeper and which we must answer, because this anger, these anxieties have existed for a long time.”

President Macron reacted to the protest by calling for the rule of law to be protected. His government had already introduced a special energy subsidy for those in need, in order to cope with the tax. However, this hasn't managed to stop the anger of the yellow vests, who are bound to continue their protests.

The yellow vests aren't a political movement, even though their requests are political. However, they risk being politicized by letting themselves be integrated into France's party political movements. This isn't new: political parties are mastering the art of undermining legitimate movements and claiming them for themselves. Both France's far-left and far-right believe that the yellow vests could be an essential electoral boost to them before the impending European elections in this coming May.

The yellow vests are certainly fed up, but one thing would likely differentiate them from American conservatives.

But even if we assume that this movement manages to resist the attempts of being swallowed by either political side, what future can it have in such a tax-friendly country? The yellow vests are no Tea Party: they lack the structure and ideological backing that fueled the Tea Party.

The yellow vests are certainly fed up, but one thing would likely differentiate them from American conservatives: the Tea Party understood that in order to cut taxes, you need to cut spending. In France however, expectations to win just as many people over on the promise of cutting spending are grim.

When president Macron talked about "slackers," "people who are nothing," and an "unreformable country," Politico called it an "arrogance problem." Surely, passing an elite school and doing banking for Rothschild bears that risk. Be that as it may, the essential question is how reformable France really is. People arguing to cut taxes is a wonderful thing, but it also needs to be offset with the belief that the government isn't here to solve all of your problems. We're not hearing that from the yellow vests.

If the yellow vests want to become a movement that has an actual voice in the process, then it needs to be ideologically sound.

France's far-right under Marine Le Pen also argues for considerable cuts in income taxes and other taxes, which has given some on the American right reason to believe Le Pen would qualify as a US conservative. There again, cutting taxes without cutting spending is just going to shift the problem to debt and inflationary policies.

If the yellow vests want to become a movement that has an actual voice in the process of reforming France, then it needs to be ideologically sound.

France should either cheer on the Paris Climate Accord for its great virtue or burn tires over sky-high petrol taxes introduced to curb carbon emissions. You can't really have both.