Eye Exam with Your Smartphone? Optometrists Say No

A Chicago-based healthcare startup that allows customers to conduct eye exams from their homes and obtain a prescription is fighting back against a South Carolina law that prohibits the company from operating in the state.

Opternative, an online eye exam company, and the Institute for Justice, a public-interest law firm, filed a lawsuit in South Carolina civil court last week arguing that a law passed in May violates the state constitution.

"Don't Innovate in Our Market"

Opternative, which was founded in 2012 and launched to the public in 2015, developed technology that allows customers to obtain a prescription for glasses and contacts without ever stepping foot in a doctor’s office.

Using Opternative’s technology, customers self-perform their own vision test for $40 using a smartphone and computer. The results of the exam, along with answers to a list of questions about the patient’s medical history, are then compiled and sent through Opternative’s platform to a state-licensed ophthalmologist, who reviews the information and writes a prescription.

Opternative currently operates in 39 states, but the company has been effectively banned in South Carolina.“If we have to, we’ll use the judicial system to defend our doctors’ constitutional right to their economic freedom.”

There, state lawmakers passed the Eye Care Consumer Protection Law this year, which states that vision assessments “must not be based solely on objective refractive data or information generated by an automated testing device, including an autorefractor or other electronic refractive-only testing device, to provide a medical diagnosis or establish a refractive error for a patient as part of an eye examination.”

The American Optometric Association pushed for the legislation, but Gov. Nikki Haley, a Republican, ultimately vetoed the bill and criticized it for using “health practice mandates to stifle competition for the benefit of a single industry.”

“If [the bill were] allowed to become law, South Carolina would become the eighth state to impose such a ban, putting us on the leading edge of protectionism, not innovation,” Haley continued.

The Republican-led state Legislature ultimately voted to override Haley’s veto, with the Senate voting 39-3 and the House voting 98-1.

“This bill is protectionist legislation at its worst,” Aaron Dallek, Opternative’s CEO, told the Daily Signal. “It protected the economic interest of one group of people over the interest of the citizens of the great state of South Carolina.”

According to a complaint filed with the state court, the lawsuit argues that the law keeps Opternative from exercising its right to “pursue an honest living free from arbitrary, irrational, and protectionist regulation.”

In response to the lawsuit, Barbara Horn, secretary-treasurer of the American Optometric Association and an optometrist in Conway, South Carolina, said Opternative and the Institute for Justice “are not concerned about the health care needs” of South Carolinians.

The American Optometric Association also filed a complaint with the Food and Drug Administration in April urging the agency to take action against Opternative.

“Having lost decisively in our state capital and still lacking any credible research or federal medical device approvals, they’ve come back to try to impose their profit-driven approach to healthcare in South Carolina,” Horn said on behalf of the organization regarding the lawsuit. “Their questionable legal tactics will cost the citizens of our state time and money – resources better invested in protecting the health of our patients.” 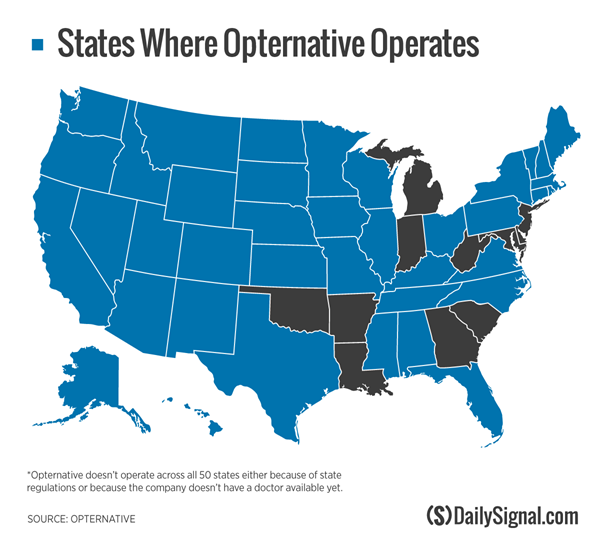 McNamara, meanwhile, said the South Carolina Legislature has carved out specific regulations and restrictions for eye care and optometrists, specifically.

In June – one month after the Legislature voted to override Haley’s veto of the Eye Care Consumer Protection Law – state lawmakers passed the South Carolina Telemedicine Act, which legalized telemedicine across the state.

The two laws, McNamara said, conflict with each other.

“That’s part of what makes the ban on Opternative’s technology unconstitutional,” he said. “What the state has essentially said is, ‘We don’t have a problem with telemedicine, and we trust doctors, as long as they’re meeting the standard of care, to choose what technology they want to use and choose how they want to incorporate the internet into their practice, except for ophthalmologists.’”

South Carolinians Aren't the Only Ones Missing Out

In addition to South Carolina, lawmakers in Georgia and Indiana passed bills this year prohibiting Opternative from operating in those states.

Dallek said the company “doesn’t make threats” regarding the potential for legal challenges to laws in those two states. However, he didn’t rule it out completely.

Challenges to Opternative’s technology underscore debates taking place in state legislatures nationwide and in the courts following the rise of technology companies like Uber and Airbnb.

In response to these new technologies, government officials at the local and state level have passed ordinances and laws regulating companies like Opternative.

McNamara said that no matter what the company or service is – be it eyecare, ride-sharing, or mobile vending – the core issue remains the same.

“When you look at these fights, it’s always the same underlying phenomenon. Whatever the specific facts of the case are, it is always a legislature kowtowing to a powerful, private interest group at the expense of some new entrant, some entrepreneur, some innovator,” he said.

“I think a big solution to the problem is to persuade the courts to continue the growing trend of taking a serious look at regulations like this and stop standing up for the protectionists for protectionist's sake,” McNamara continued.

Republished from the Daily Signal.

Melissa Quinn is a senior news reporter for The Daily Signal.