This quotation is translated from Bastiat’s “The People and the Bourgeoise.”

This quotation is from page 184 of Liberty Fund’s newly published, expanded English-language edition, splendidly edited by David Hart, of Frédéric Bastiat’s great work Economic Sophisms and “What Is Seen and What Is Not Seen." 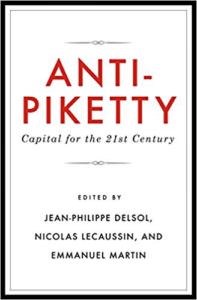 Specifically, this passage is from the new translation of Bastiat’s May 1847 essay “The People and the Bourgeoise” (“Peuple et Bourgeoisie”).

Bastiat here responds to those who insist that the larger are differences in monetary incomes (or wealth), regardless of the reasons, the greater are the prospects of social revolution.

It is a cause of deep sadness to be faced with the frightful consequences contained in these erroneous doctrines and the way in which these ideas are propagated with such ardor. A social war is spoken of as being as natural and inevitable, which is bound to be brought on by the alleged radical hostility between the people and the bourgeoisie and which is similar to the strife that in all countries has brought the aristocracy and democracy to blows. But, once again, is the comparison accurate? Can one assimilate wealth obtained by force to that acquired through work? And if the people consider any rise in status, even the natural rise generated by industry, thrift and the exercise of every virtue to be an obstacle to be overturned, what motive, stimulus or raison d’être will there be left to human activity and foresight?

It is dreadful to think that an error so pregnant with disastrous possibilities is the outcome of the profound ignorance in which modern education swaddles the current generations with regard to anything that relates to the way society works.