The popular assumption is that most Americans were illiterate before the creation of our public education system in the 1830s, but is it true?

Most Americans were illiterate before the creation of our public education system in the 1830s.

That seems to be a popular assumption, but is it true?

If you’re looking for statistics, they’re notoriously hard to get when it comes to literacy rates in past centuries. Most historians of early American history have gravitated toward signatures on documents – such as wills and deeds – as indicators of literacy. (Those who could not read simply used a mark.) Signatures are by no means fool-proof evidence of literacy, but it’s the best we have.

The following chart from Kenneth Lockridge's Literacy in Colonial New England shows the estimated percentage of literacy from signatures on New England wills between 1650-1795: 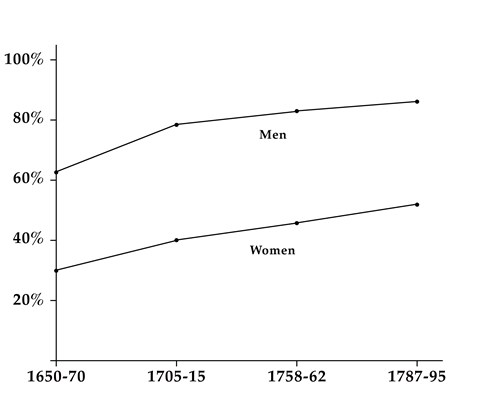 As you can see, about 80% of men and 50% of women were literate in New England around the time of America's founding. Scholars have noted that the percentages were probably lower in the South at the time.

We also have the testimonies of widespread American literacy in the early nineteenth century. In 1800, The Columbian Phoenix and Boston Review magazine reported that “no country on the face of the earth can boast of a larger proportion of inhabitants, versed in the rudiments of science, or fewer, who are not able to read and write their names, than the United States of America.”

Improving literacy in America requires not simply having an education system. It also requires a culture of literacy.The factors behind the growth of America’s literacy rates are numerous. Johann Gutenberg’s invention of the printing press in 1439 dramatically increased popular access to books. The Protestant Reformation in the sixteenth century placed salvific importance upon individual Christians being able to read the Bible.

Additional motivation to spread literacy came with the Enlightenment’s emphasis on reason and equality – the latter of which contributed to the closing of the gap between male and female literacy during the course of the nineteenth century. All these historical movements and ideas created a culture in America that encouraged more widespread literacy.

Thus, the increase in American literacy cannot be solely chalked up to the creation of a public education system. Indeed, as statistics today show, an education system is no guarantee of literacy. According to a recent study conducted by the U.S. Department of Education, 32 million of American adults are illiterate, 21 percent read below a 5th grade level, and 19 percent of high school graduates are functionally illiterate, which means they can’t read well enough to manage daily living and perform tasks required by many jobs.

Improving literacy in America requires not simply having an education system. It also requires what Americans had in past centuries: a culture of literacy.