Debate Tips: 8 Things I Wish I Knew As a Novice Debater

There is a huge learning curve to debate: a lot of information to absorb, structural formalities to remember, and usually a fear of public speaking to overcome.

Below are the only two pictures I have from my novice year, and I don’t understand why I thought those jet black tights were a good idea (or wearing a hair bow every single tournament). I look back on these pictures with fond memories, regardless of my clueless sense of fashion, but there is a lot more that I wish I would have known, more than just beige nylons and better hairstyles. 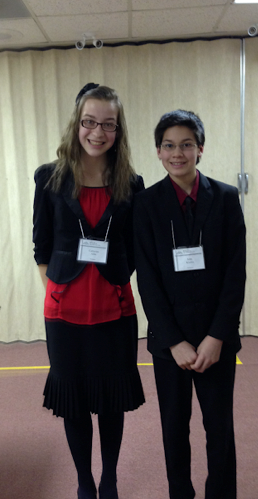 There is a huge learning curve to debate: a lot of information to absorb, structural formalities to remember, and usually a fear of public speaking to overcome. Making mistakes and learning as you go will be part of your novice year, but by looking back and identifying some areas which I misunderstood, I hope I can help you avoid some common mistakes and jump into debate head first!

1. Debate is just a structured way to have a conversation about choices

Yes, we have a formal, structured format to maintain professionalism and organization; but at its core, debate is very simple. Think of all the times you have "debated," or simply argued with your siblings, parents, friends, or enemies. Whether it’s trying to decide what to name your hamster, who gets to play with a toy first, or trying to convince your parents that you should be able to stay up later, we all have debated issues before on some level.

As a debater, you are trying to convince your judge of something. Think of how many times you’ve done that in life, whether it’s convincing a manager they should hire you, convincing your teacher you knew what you were talking about in a research paper, even convincing yourself you should eat that last piece of cake. We debate ourselves internally every day over most of the choices we make, using impact calculus in our everyday lives to make decisions (weighing the pros and cons.) Many parents feel scared to judge debate their first year, but as we present in judge orientation, all of us judge communication every day! Any time you’ve heard a politician or speaker, whether on the news or in person, and had an opinion about it, you were judging their communication skills and forming an opinion on whether or not you agreed with them.

Once we realize that debate is simple at its core, it makes it a lot less intimidating. Yes, there is a lot of theory and complicated details that go into debate. But those can be learned as you go along. The first and most important thing to understand is that debate is not complicated. Approach debate rounds the same way you would trying to convince a person on the street to do something. Use clear, everyday language. Think logically through the issues. And don’t be intimidated by the format of debate.

2. Don’t let evidence control you! Use it as a tool.

My very first debate round, I walked up to the podium with the negative brief in my hand and read it. Literally. Word for word. I started on the first page, didn’t look up, and kept reading until the timer beeped. What I didn’t understand was that every piece of evidence represented an argument, but it wasn’t the argument itself. If four-step refutation is: 1- They Say, 2- We Say, 3- Evidence, 4- Impact, notice that only one of those points is evidence. Reading a piece of evidence is not making an argument. It needs to be sandwiched with an explanation before, and a summary and impact after. This is the biggest mistake I think novices make. If you don’t just go up and read piece after piece of evidence, you automatically will be better than at least 50 percent of novices (at least in my experience/observation.)

Pieces of evidence were written by real people, living in the same world as you, analyzing the same problem as you. Don’t think that they are so much smarter than you and that they are the only ones who can comment on the subject. Come up with your own opinions on cases and use evidence to support your opinions. Think through the potential disadvantages of a case, tell them to the judge, and then if you happen to have evidence to support your points, great! Of course, if you can’t think of any arguments against a case yourself, you can use evidence to do the brainstorming for you. But please ... please ... please read the evidence back at the table before you read it in your speech and make sure you understand it before you’re forced to defend it.

3. Take risks! At first, debate to practice, not to win.

I’m not saying don’t care at all about trying to do well. Always try your best and work hard to prepare for debate rounds. What I am saying, is that your focus your first year should be primarily on personal growth and understanding debate better through a variety of experiences. Some practical ways to do this are the following:

4. It’s okay to admit you don’t know everything

Not all novices have this problem. In fact, some have the opposite problem: they are too unsure and nervous instead of confident. My novice year, I was being cross-examined by one of the best debaters in the nation, and he asked me about the credentials of an author. I didn’t have her work experience or education as evidence for some reason, but I just said, “Oh, she probably has a PhD or something.”

Sure enough, that showed up on the ballot, and it’s definitely better sometimes to just admit you don’t know something than be caught in a fib or forced to defend a position you’re not confident in. You don’t have to have all the answers. Yes, try to have as many as you can. No, don’t just say, “I don’t know,” to every single question or argument. But when you truly are backed into a corner, it’s better to just admit you don’t know something than to pretend you do.

This applies to debate class as well. Let your teachers know if you have questions or don’t understand something. One of the most frustrating things as a debate coach is when you repeatedly ask if anyone has any questions and are met with silence, only to hear later that all the kids are confused and have no idea what you’re talking about. In general, teachers love when you ask questions. It shows that you’re engaging with the information you’re presenting, and they can identify any areas they need to do a better job of explaining or expand upon. The first step to growth is admitting what areas you need to grow in; so don’t pretend to know something you don’t. In the long run, it’s only yourself that you’d be hurting by pretending.

5. You should fully understand what your case does

My novice year my partner and I ran a case instituting public financing for election contributions. Essentially, taxpayers would be paying for everyone’s campaigns. It seemed like a great idea at the time, but when I looked back at that years later I realized what an awful idea it is, and I remembered not really understanding it at the time. It is essential that you understand your affirmative case. Do not move on to the next point in your case until you understand it, and reach out to your debate coach, a parent, or another debater if you’re having a hard time understanding it.

6. You actually have to LISTEN to the other team’s speeches

My partner and I ran one case our very first club round, and it failed miserably so we changed it before the second week without telling the opposing team ahead of time. After we read the new 1AC the second week for a completely different case, the negative team got up and argued for 8 minutes against our case from the previous week. It was incredibly awkward. They were so busy putting together their arguments they didn’t even take the time to listen to the 1AC to hear what we were running. It is very important to listen to the other team, especially if you’re expecting and counting on them to make certain points. I know you have limited time and it can be hard to multitask in a debate round, but listening is the most important first step to preparing arguments.

7. You don’t have to disagree with EVERYTHING the other team says

Not every question is a trick question, think about it logically and don’t just argue for the sake of arguing. There are other ways to refute arguments than saying the opposite is true. You can mitigate them, and outweigh them, not just disagree with the points. You can attack their ideas with significance, solvency, and disadvantages without saying that the idea itself is completely ridiculous.

8. Don’t take things that happen in debate rounds too personally

Because debate is competitive, sometimes it’s tempting to get into a competitive mindset which paints your opponent as the enemy and yourself as a victim. If a debater makes a point you don’t like, don’t gossip about their intelligence outside of debate rounds. If they are slightly rude, don’t think that they really hate you; they probably just got caught up in the moment. Assume the best of your competitors. Of course, if a team is acting unethically, lying, or bullying you, definitely talk to a parent or coach about it. But for the most part, things that people say and do in debate rounds don’t translate into real life. Don’t hold a bitter grudge against that one team you can’t beat like I did. Instead be thankful you had that experience to grow from and use it to improve.

Novices, you are about to embark on one of the greatest intellectual and academic adventures you’ll ever have. Doing debate changed my life, and transformed me from a shy, nervous, and awkward middle schooler into a much more confident and analytical speaker. My experience in debate has helped me already in job interviews, college applications, everyday conversation, research papers, keeping up with current events, and it subconsciously impacts my way of thinking on pretty much any subject. In debate you will learn to think quickly, explain things clearly, and come up with arguments and ideas you would have never known you had. I wish you all the best in your novice year, and I hope these tips were helpful!

For an expanded video version of this post, and more tips for debate, check out my YouTube channel.